dogs show us how to relax

Being a tense person, I need to learn from Penny how to relax: 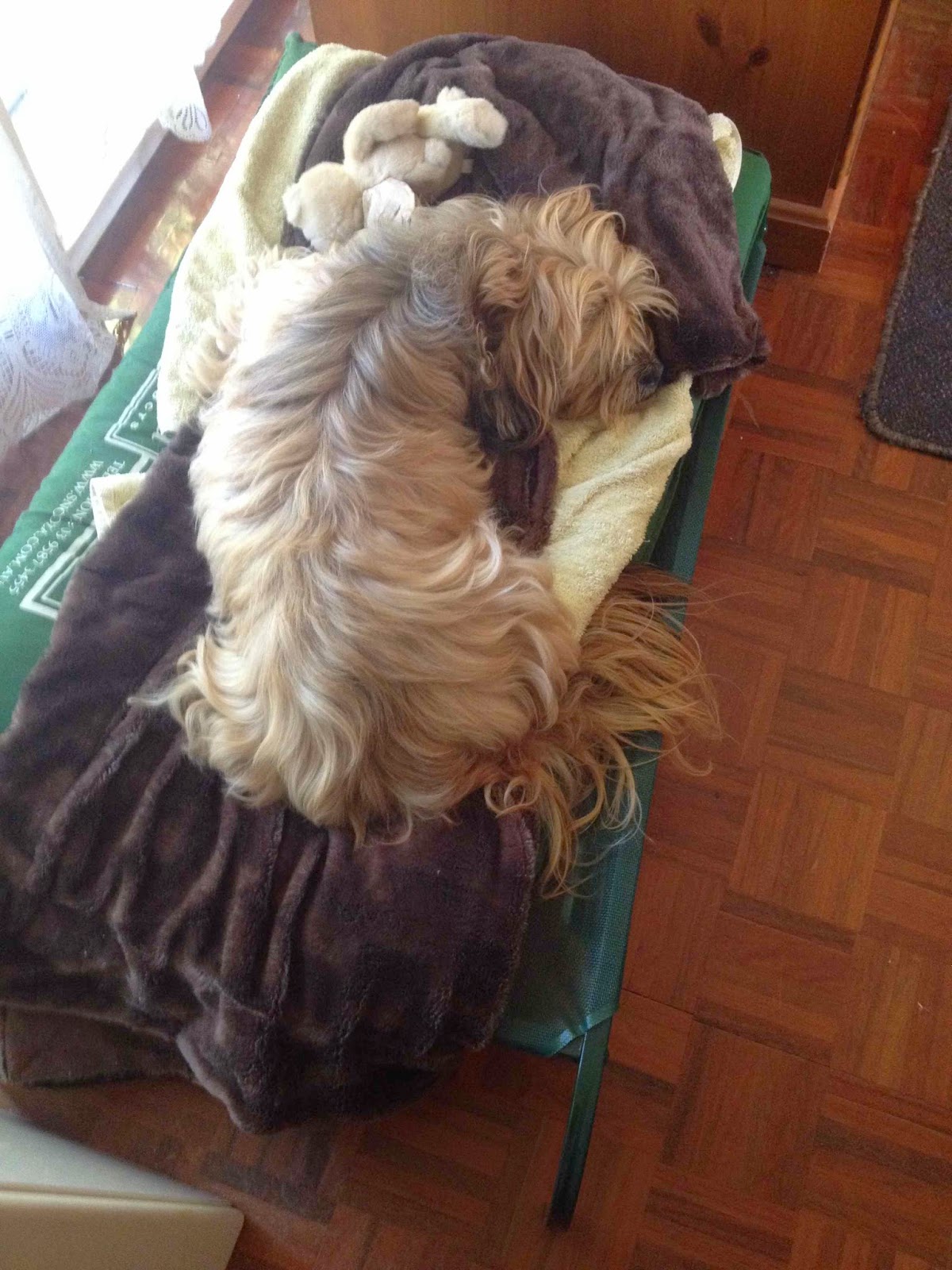 When I went outside to try to sort all our little bits and pieces - nails, assorted drill bits, variously-sized screws, strange bit of metal that defy classification - Penny came along to continue the relaxation class. 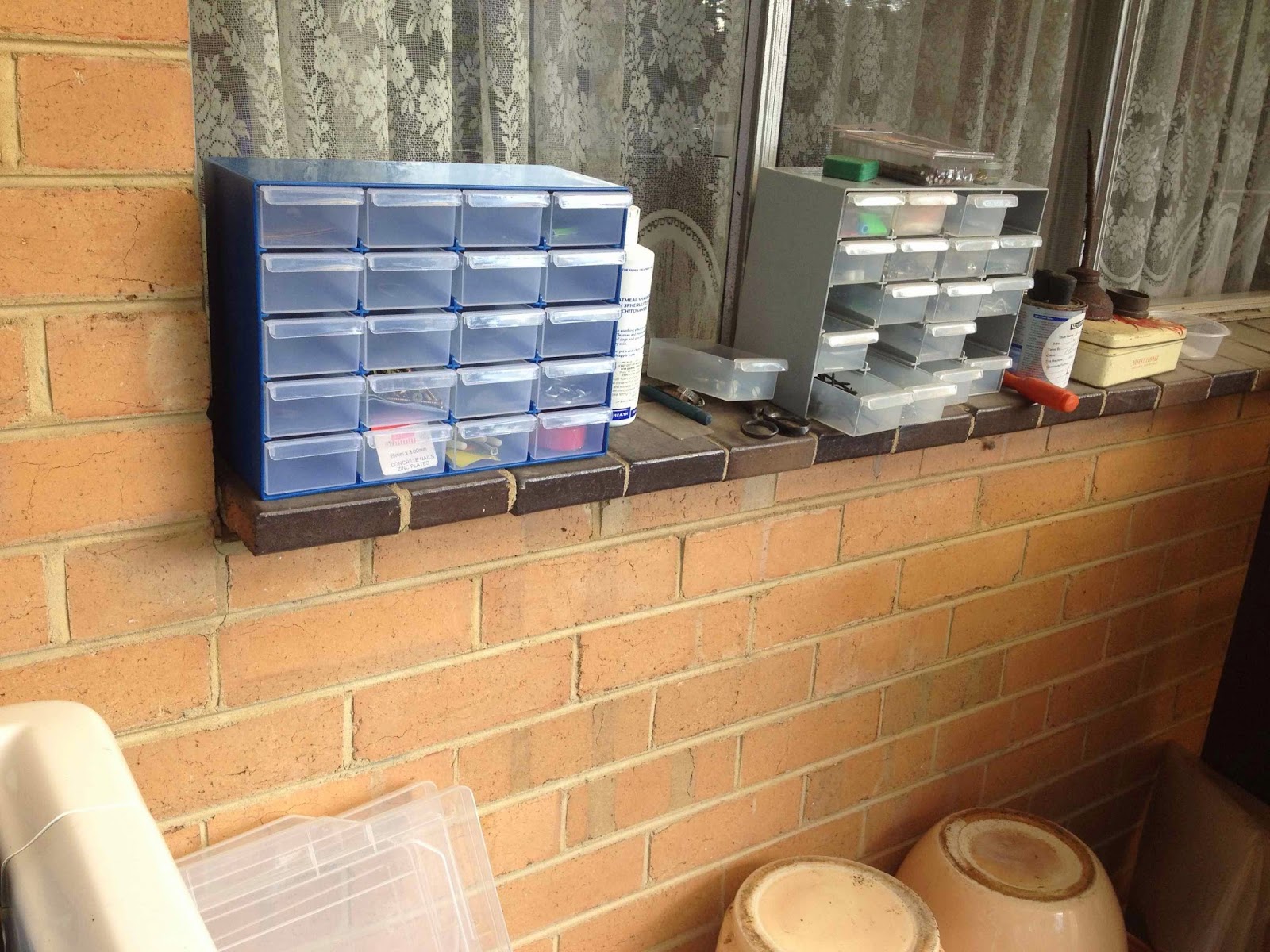 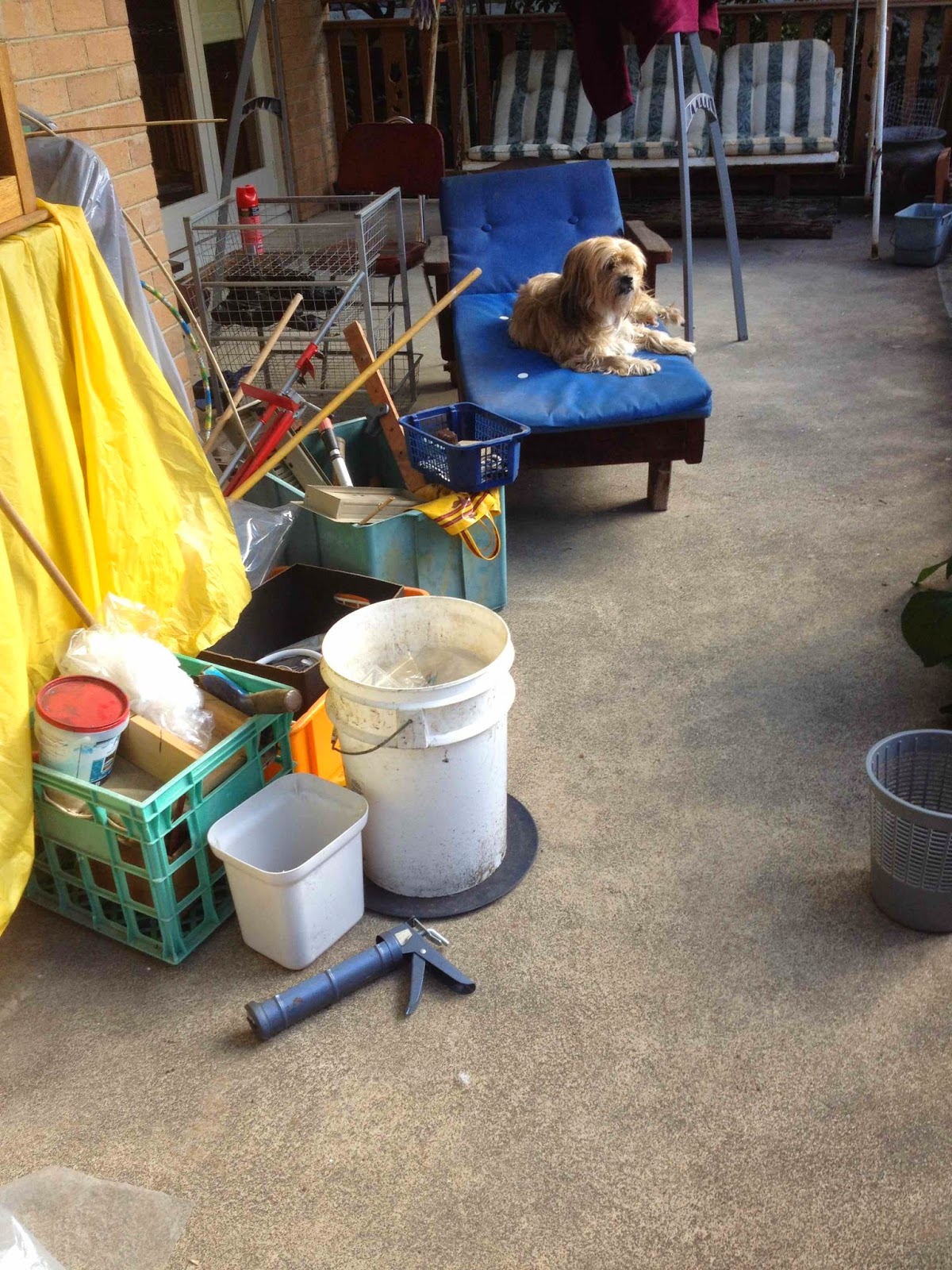 We've been cleaning up our back shed over the last couple of weeks. Yep, it's a lo-o-ng process!

Today I was moving stuff around and noticed a container of RoundUp, and said to myself, in an organic garden there is no room for such a poison. But then I thought, what if a really, really hard-to-get-rid-of weed needs just a teensy touch of poison, applied carefully with a small paintbrush? And so I put the container back on the shelf.

What was I thinking of? It's a poison!

And, in a satisfyingly timely happening, Grace Elliot, a veterinarian, sent in a comment today responding to my post about the dangers of glyphosate (RoundUp). She mentioned the abstract of an article in the Journal of the British Veterinary Association. So I checked up the reference, and this is part of it:


According to the Centre National d’Informations Toxicologiques Vétérinaires (CNITV) (Burgat and others 1998, Berny and others 2010), the Italian Veterinary Toxicologic Assistance Service (SATV) (Giuliano Albo and Nebbia 2004) and the human Poison Control Centre of Milan (Centro Antiveleni di Milano, CAV) (Caloni and others 2012), glyphosate is the herbicide most commonly involved in animal poisonings. Since its launch, the Veterinary Poisons Information Service (VPIS) in London has received 1323 enquiries about dogs (n=992) and cats (n=331) exposed to glyphosate-based products (Bates and Edwards 2013).


Glyphosate is the herbicide most commonly involved in animal poisonings.

I remember my brother telling me about the time his neighbour sprayed the lawn with RoundUp and found dead rabbits lying there the following day.
Posted by parlance at 21:30 6 comments:

look both ways before you cross the road

Yesterday Penny's humans were jokingly discussing how nice it would be if she learned to look both ways before crossing the road. Given that she is always on lead around traffic, I guess she hasn't had a chance to learn 'road sense'.

So I was amused to see this clip of a chimp checking for traffic before crossing a busy highway. (The more I see of the animal world, the more I realise we are only one many intelligent species that share this planet.)

At a recent talk by John, at Edible Forest Gardens in Wonga Park, he spoke about the damage we do to the soil when we dig or disturb it in any way. From what I understood, he said that Mother Earth has to bandage the wound when soil is uncovered or disturbed, and what we call 'weeds' are the first line of defence.

Yesterday we walked with Penny in Darebin Parklands, and part of the area we passed had been cleared, presumably for revegetation with indigenous plants. I was interested to see the baby wattles growing there, because I remembered John saying one of the first 'fixes' for naked, broken soil is plants that can add nitrogen to the ground, eg wattles. 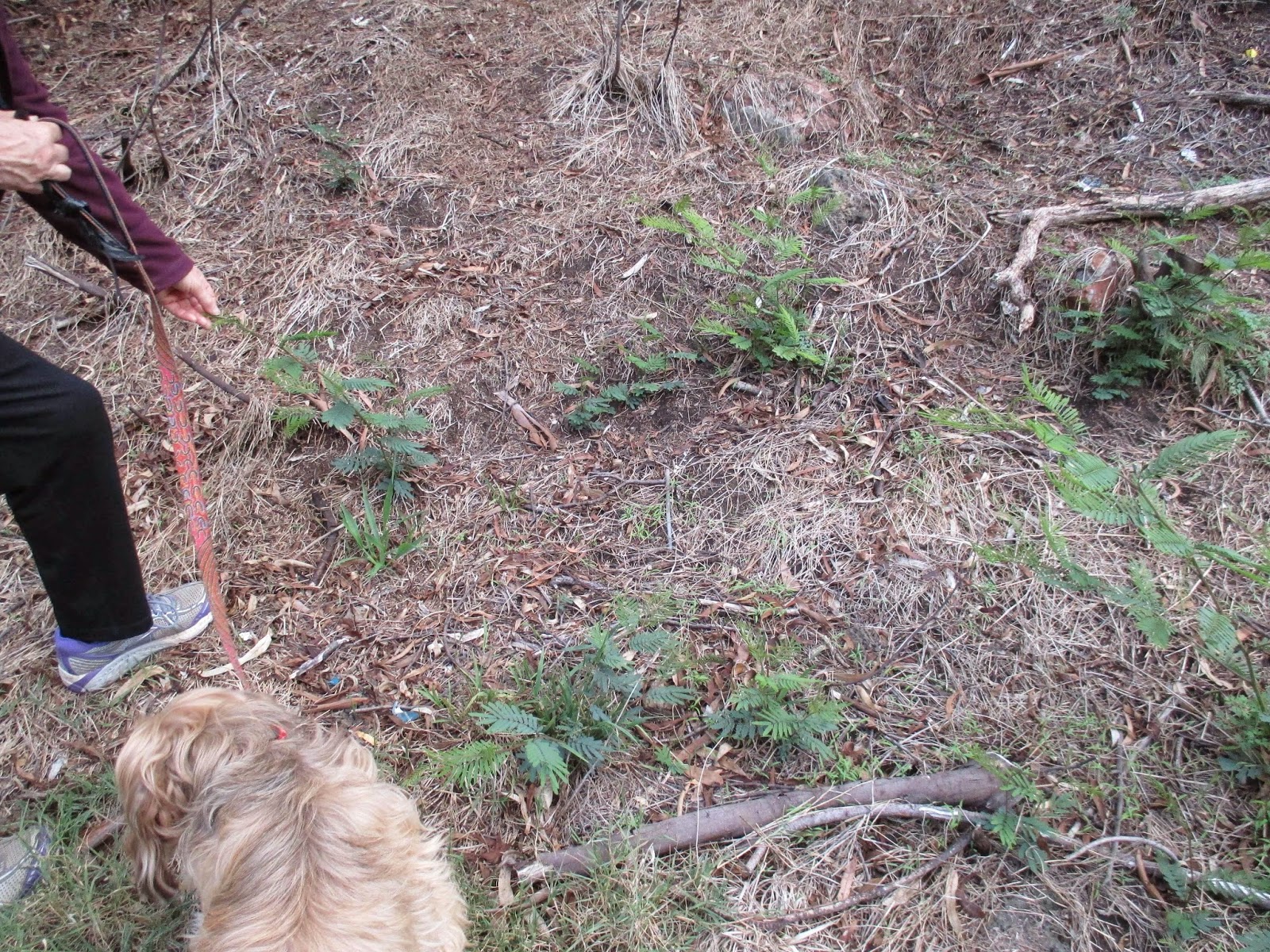 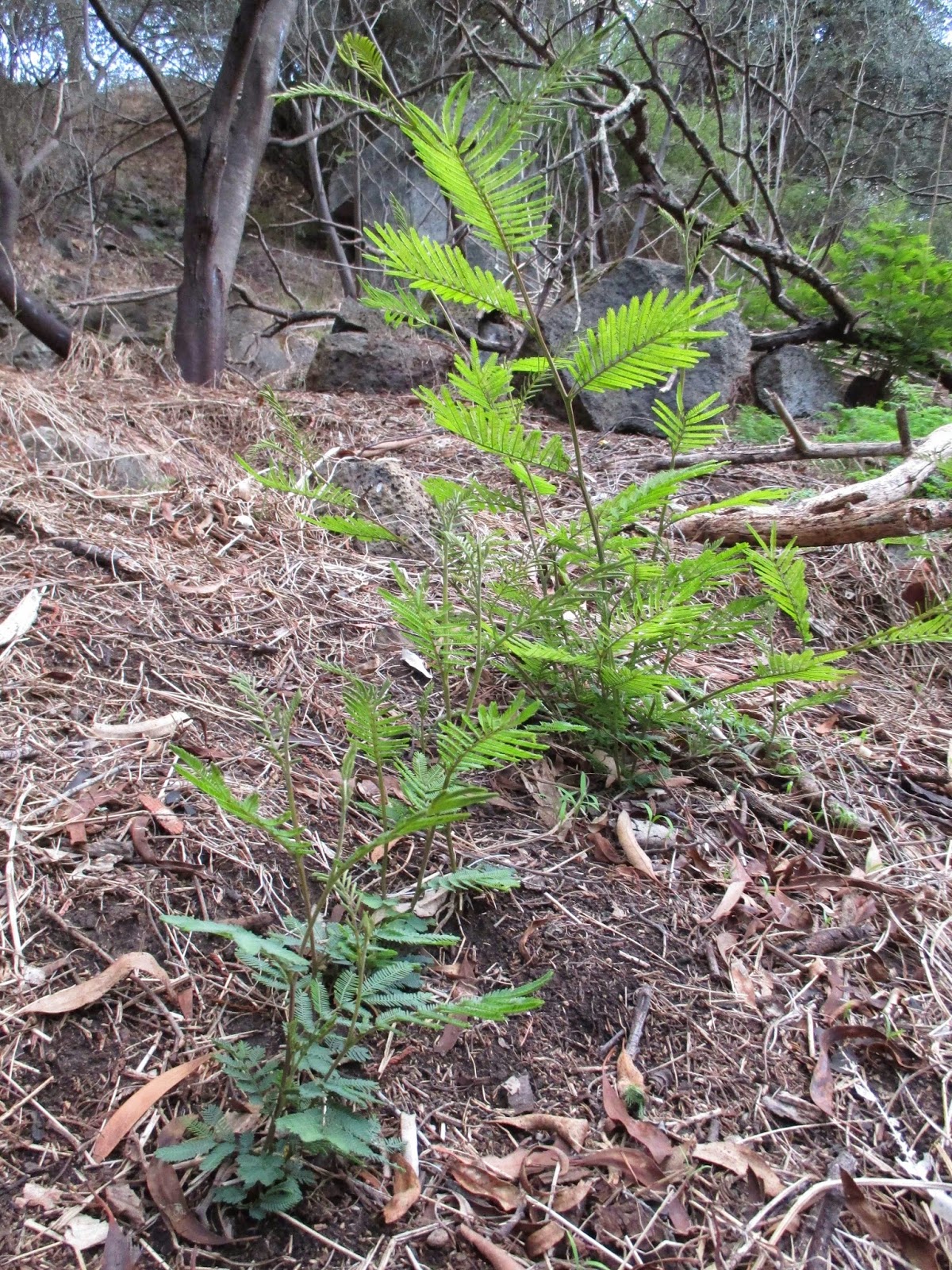 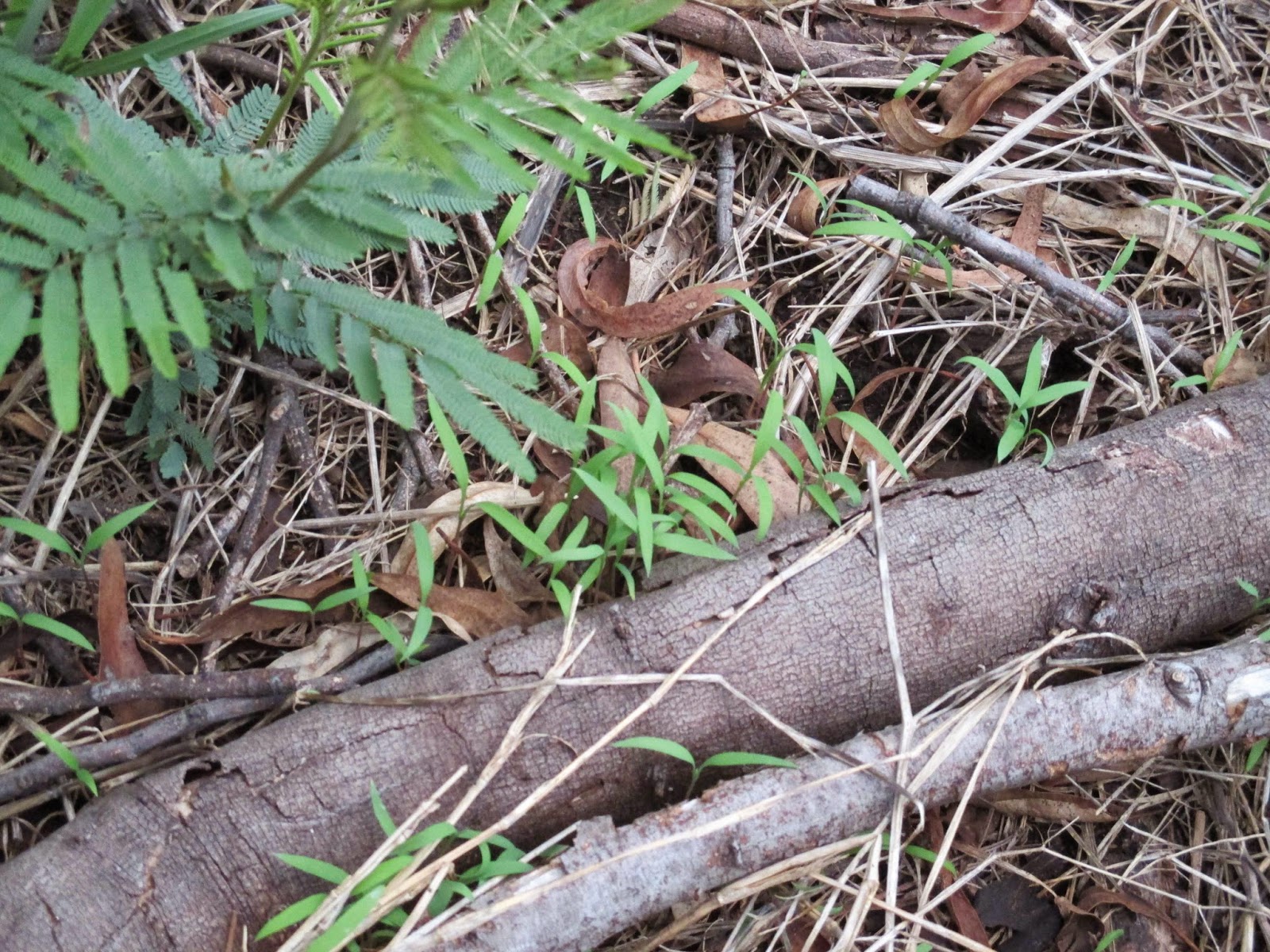 I wondered what these seedlings would turn out to be:

Further along, beside the creek, there was another array of weeds, this time not native plants. (I couldn't help noticing many of them are edible.) It's fascinating to see them  trying to fix the nakedness of the soil. I guess they will eventually be removed, because the aim is to cover the ground with indigenous plants. 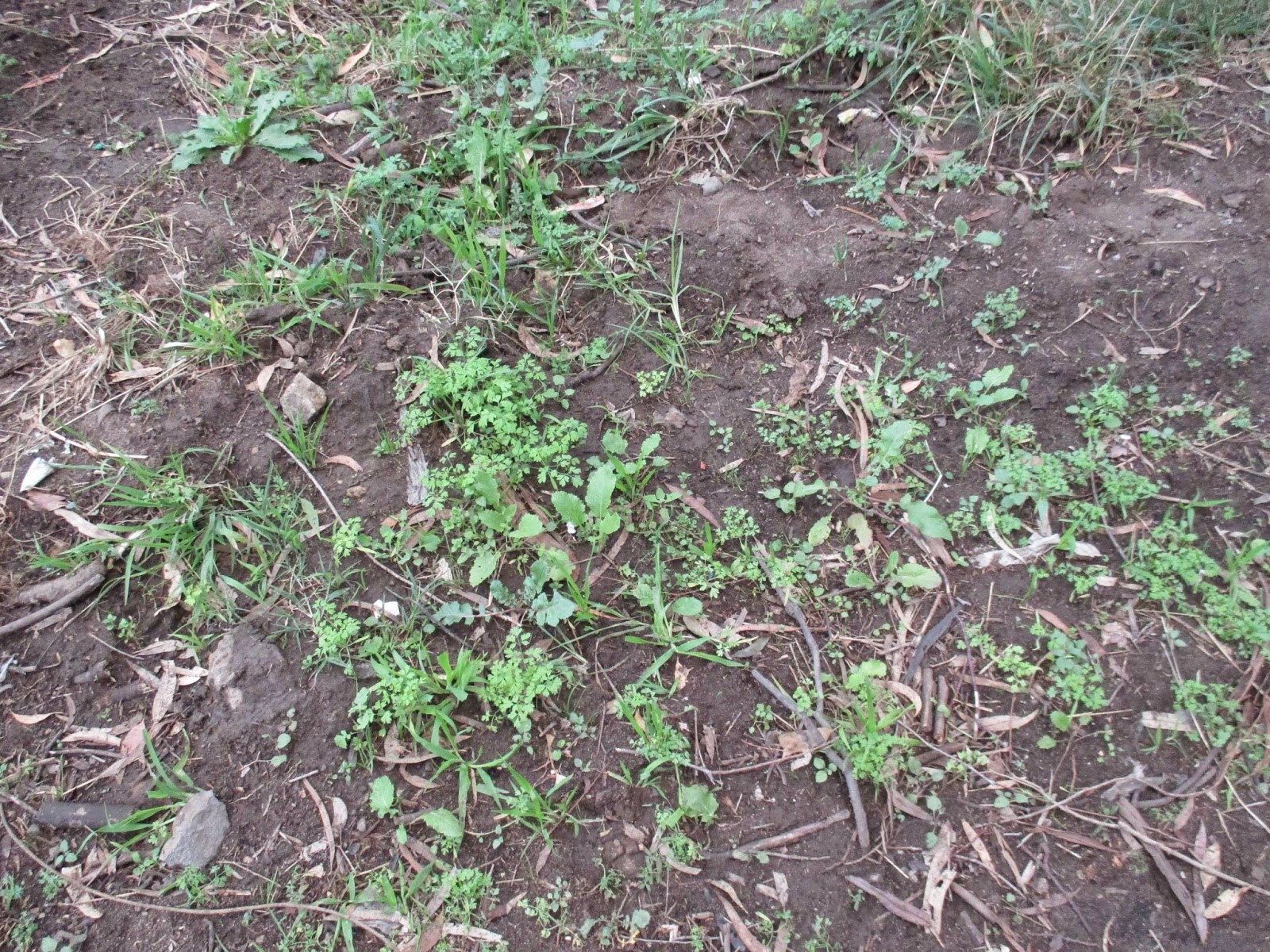 I guess they'll help build soil nutrients. The issue would be whether this is the type of nutrition the indigenous plants need.
Posted by parlance at 08:35 No comments:

I walked in Darebin Parklands without Penny this morning, because I was taking part in a 'mini retreat' to learn more about mindfulness. It was lovely to walk mindfully, using my three senses - hearing, sight and feeling/touch/body awareness. When I'm with Penny the time seems to rush by unexamined, as she dashes from place to place.

I came across an African boxthorn, a really pestiferous weed in Australia, and dared to try out a theory I have that the fruit is the same as the much-admired goji. I ate one, and it tasted nice, even sweeter than the gojis in my garden. Of course, there's the likelihood that the plant had been sprayed with poison, but I thought it looked as if it had not been.

Later, when Penny and two of us humans returned to the park, I persuaded Human Number Two to also try out one of the fruit, and so far we're unharmed, lol.

BTW, I had taken the precaution of rechecking my facts about African boxthorn and felt reasonably sure it was a goji-relation.

ADDITIONAL NOTE 11 MAY 2015: I'm not sure that African Boxthorn is safe to eat. I think it's too risky until I can find out more.

I wonder if it would be good for the park if everyone took home lots of these nutritious fruit, so the birds don't continue to seed them all around the place. (They're frightfully expensive to buy.)

Of course, the better course is to get rid of the plants entirely.
Posted by parlance at 21:06 2 comments:

barking at corellas in a gum tree

Penny must be almost recovered from her cough, to judge by the furious barking she engaged in this afternoon. No coughing, even though it was non-stop canine yelling for ages, when a huge flock of corollas landed in a big tree in our street.

Here's one branch of the tree with a small part of the visiting group: 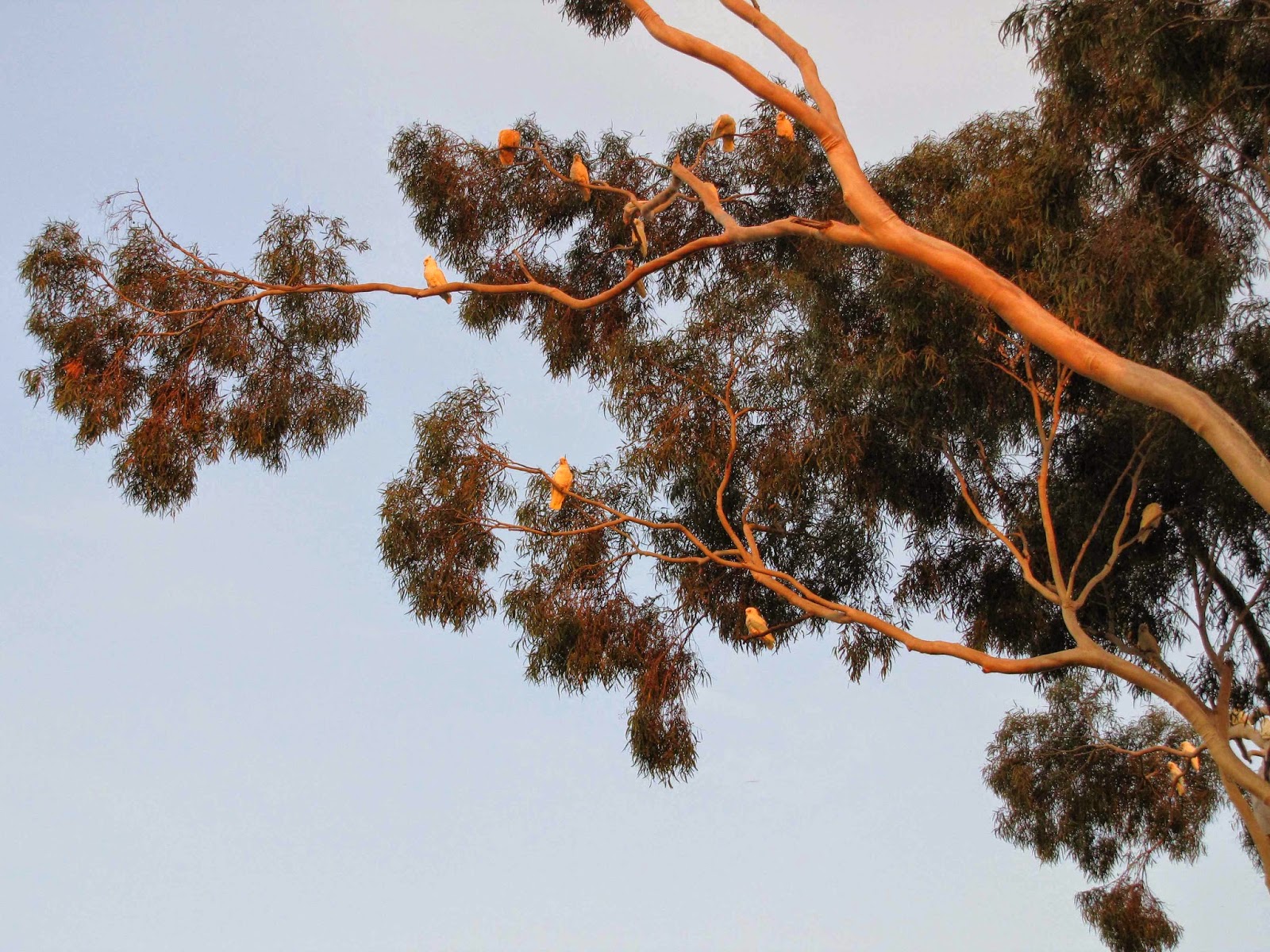 Eventually they took off, screaming their typical cry, flying so low that we felt as if we should duck our heads. A few stayed behind for a while, but Penny didn't think she had to bark at these slow-coaches once the main flock had left. 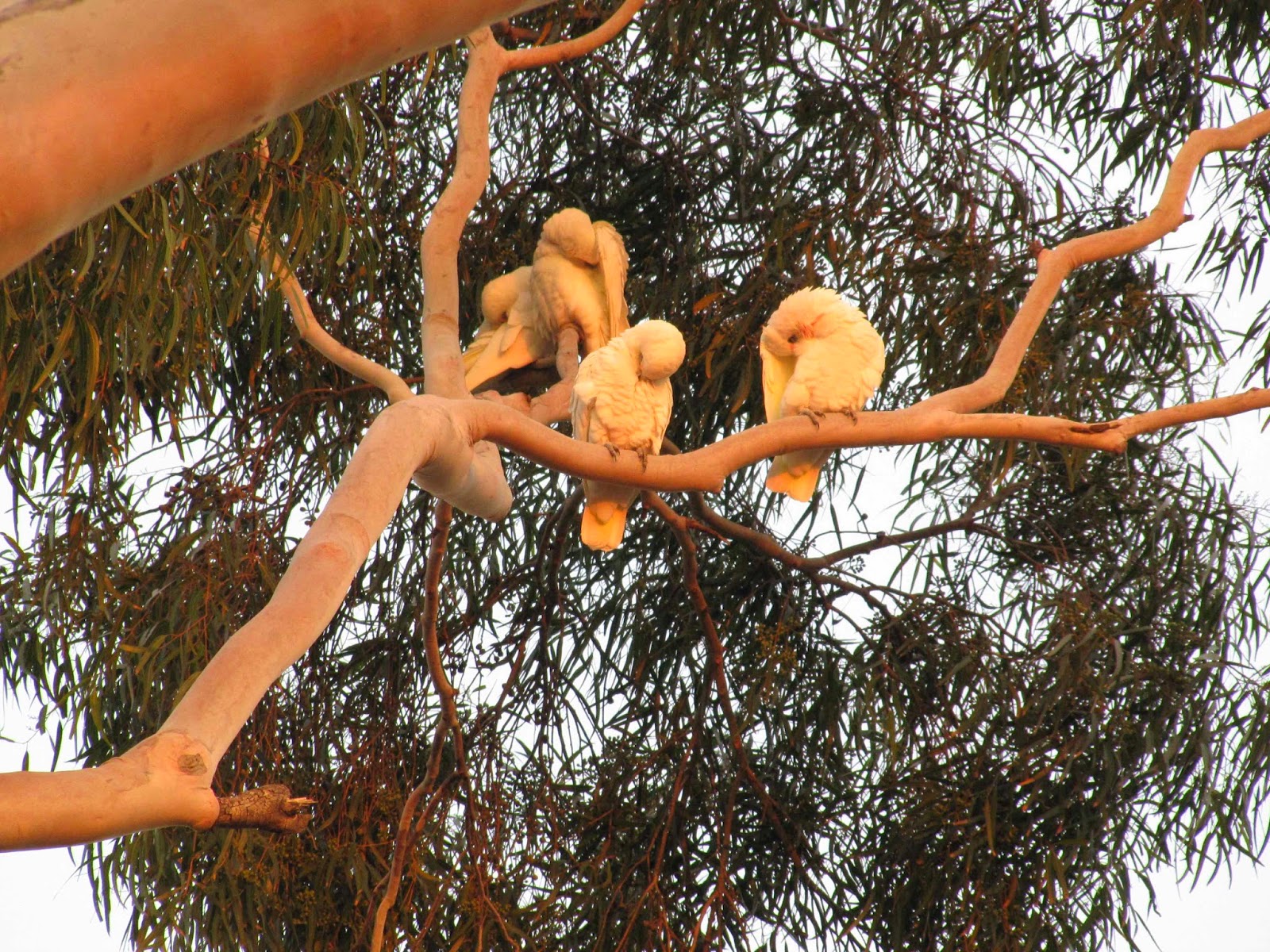 I'll have to keep an eye on the liquid amber while it has seeds, in the hope of seeing the lovely birds back again. (Lovely at the moment, because none of my trees have fruit. I'm sure I'd be yelling at them like Penny and trying to get rid of them if they were eating my crop.) 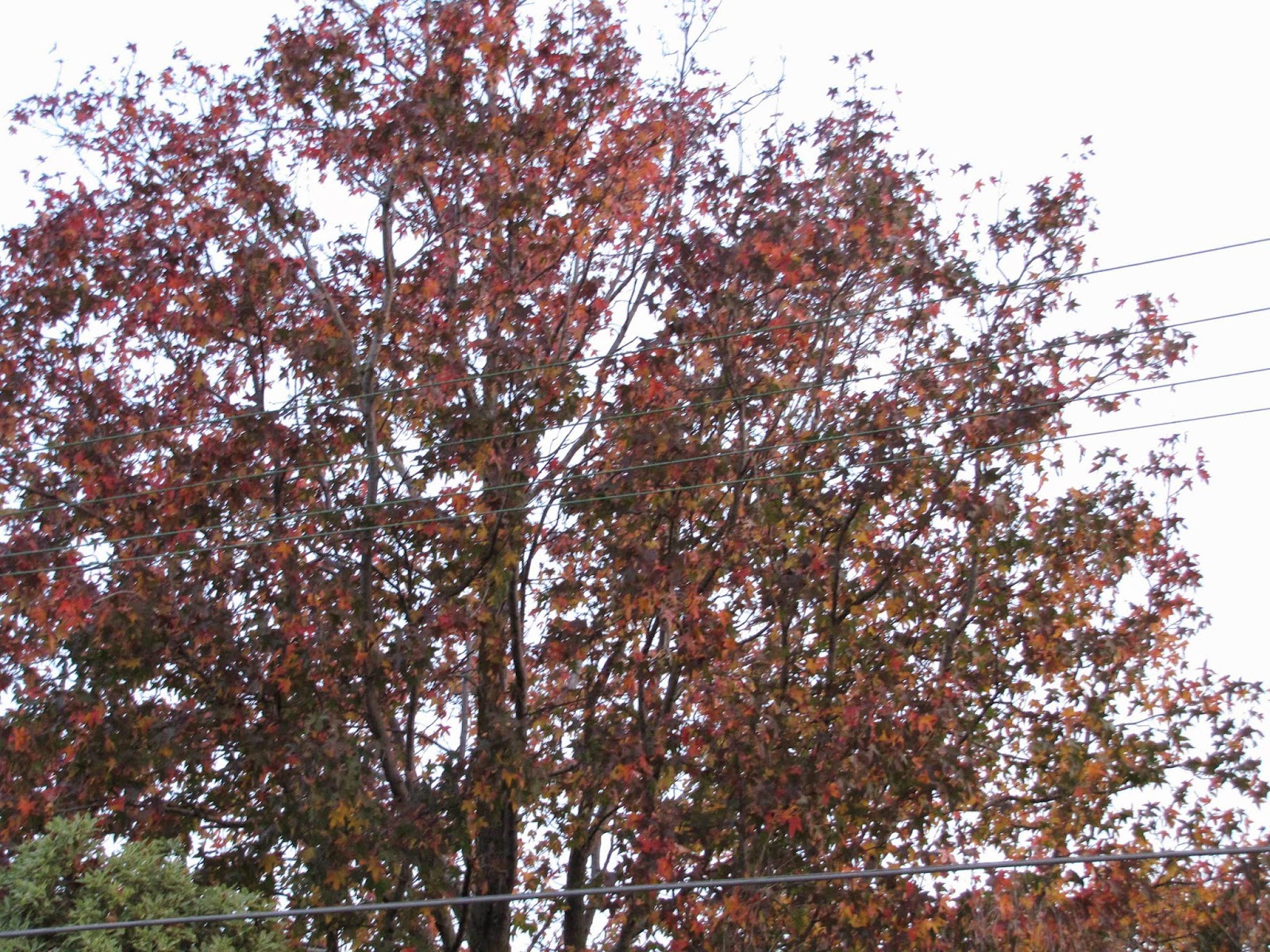 Here's what a seed looked like (after they tossed it down on the street): 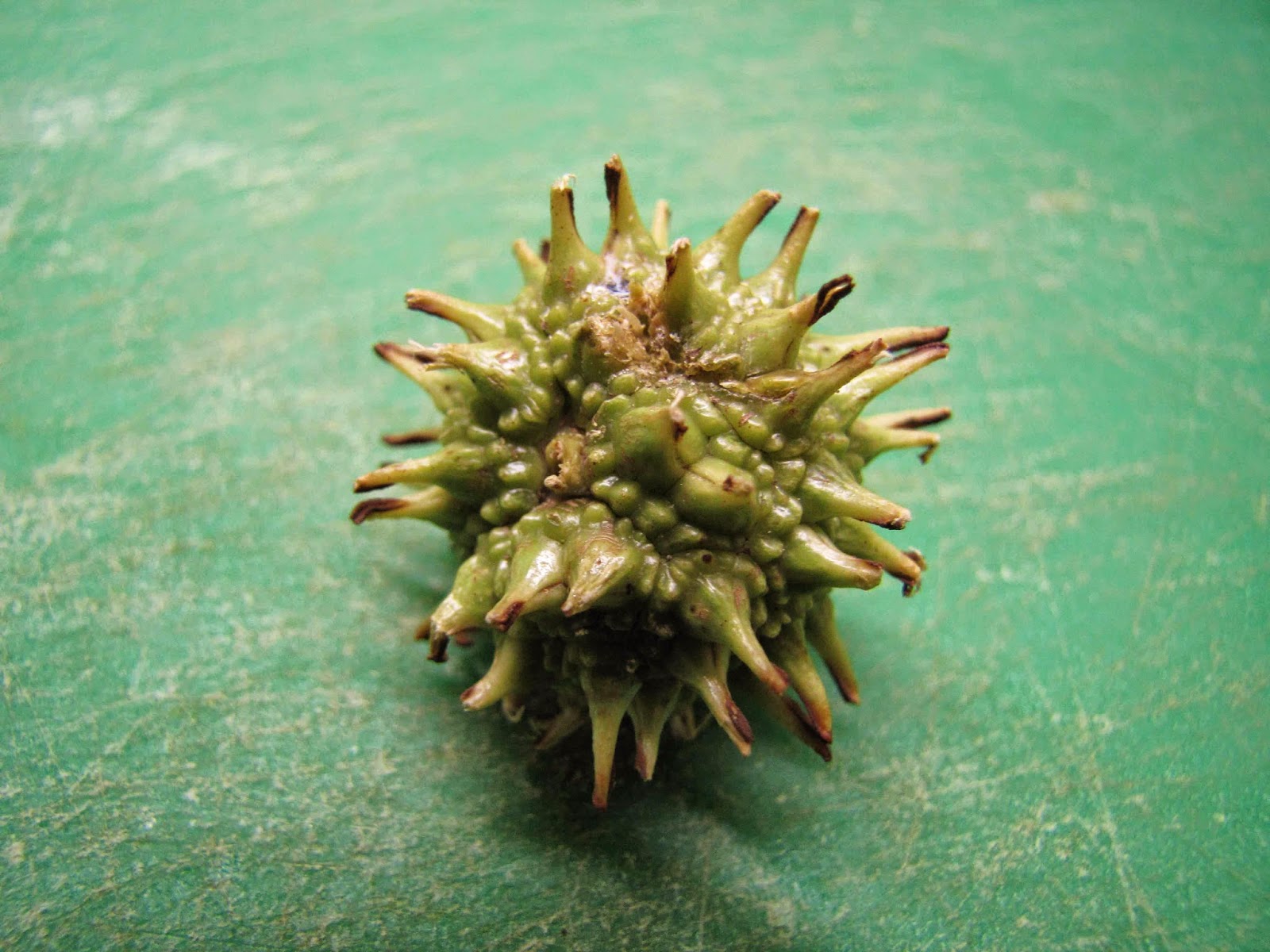 It seems the corollas can be seen by some as quite a nuisance, and their eating of liquid amber seeds may result in the spread of this non-native tree to bushland. (Discussion here.)
Posted by parlance at 22:35 3 comments:

I took some photos yesterday of the dry ground in a local park, but was so excited by a chance meeting with one of Penny's littermates that I decided to leave that post for today.

It's very dry everywhere we go. I think the soil is becoming hydrophobic, which will mean even when it rains it won't soak in. 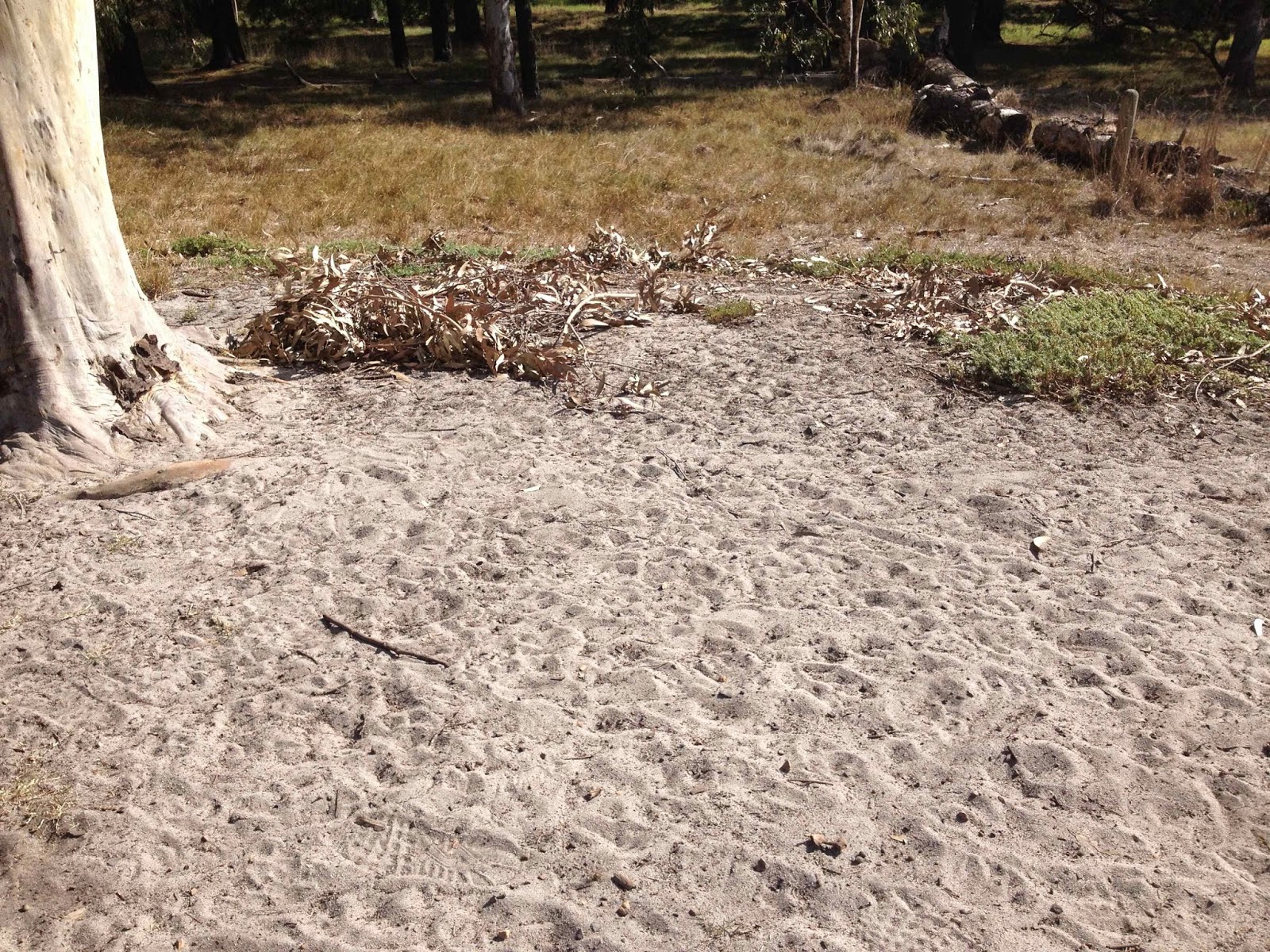 When we were in Darebin Parklands recently, I didn't notice any purslane, which is usually a real survivor, but there were some in this park yesterday, looking as if they were just managing to live. Purslane is edible and we often eat it in salads, but I  use the cultivated form that we grow at home, where I know the leaves are clean. (It's in a pot on a stand where we can be sure it doesn't have dog-wee on it, lol.) 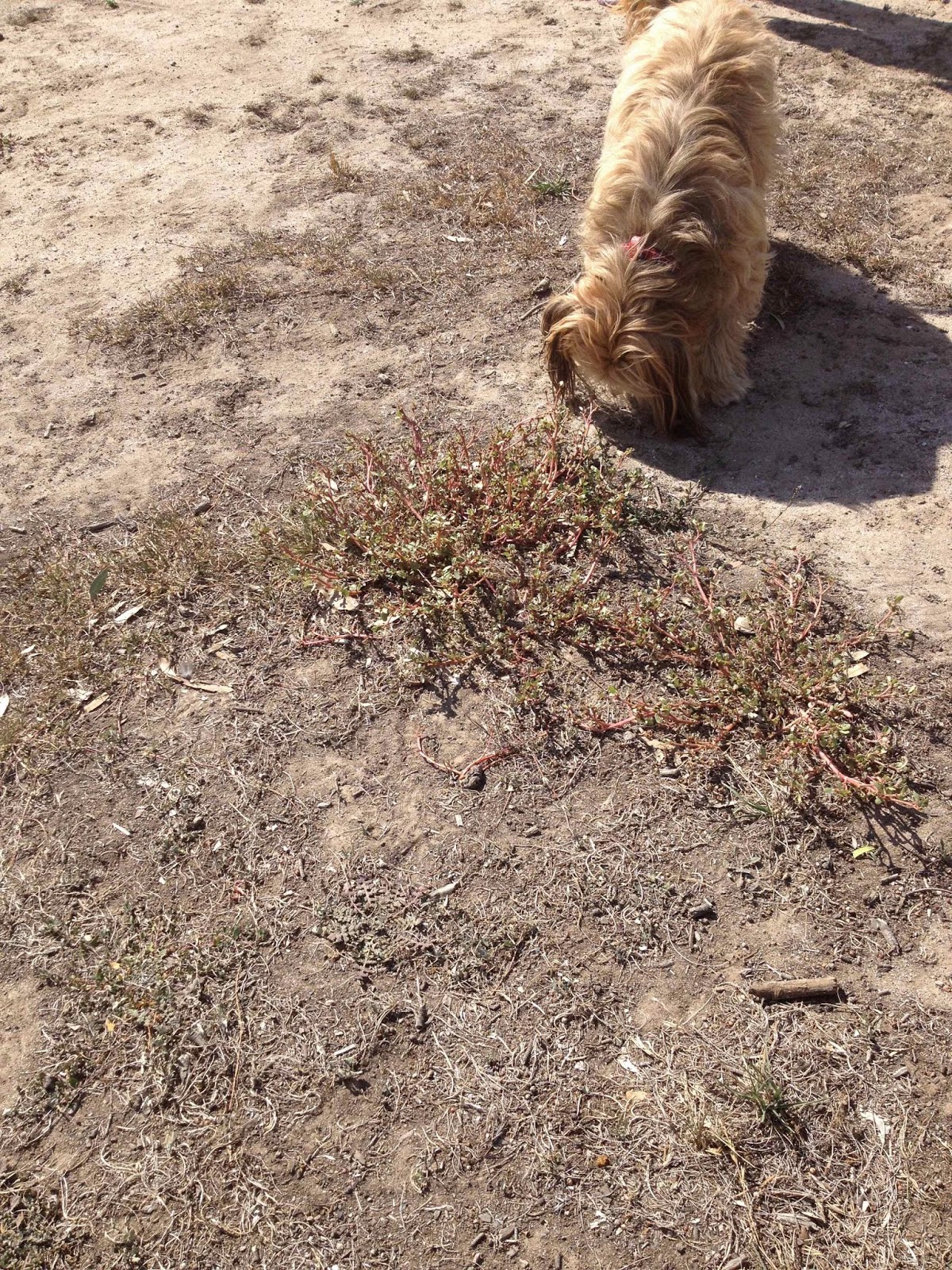 We also saw some mallows, which looked to be surviving a little better, but I still wouldn't eat them, of course, with so many dogs around. We have our own pot of mallow at home and it's much more luxuriant. We eat a little of it in salads, but do find the 'furry' leaves a little strange. But it's supposed to be good for you and the taste is nice. 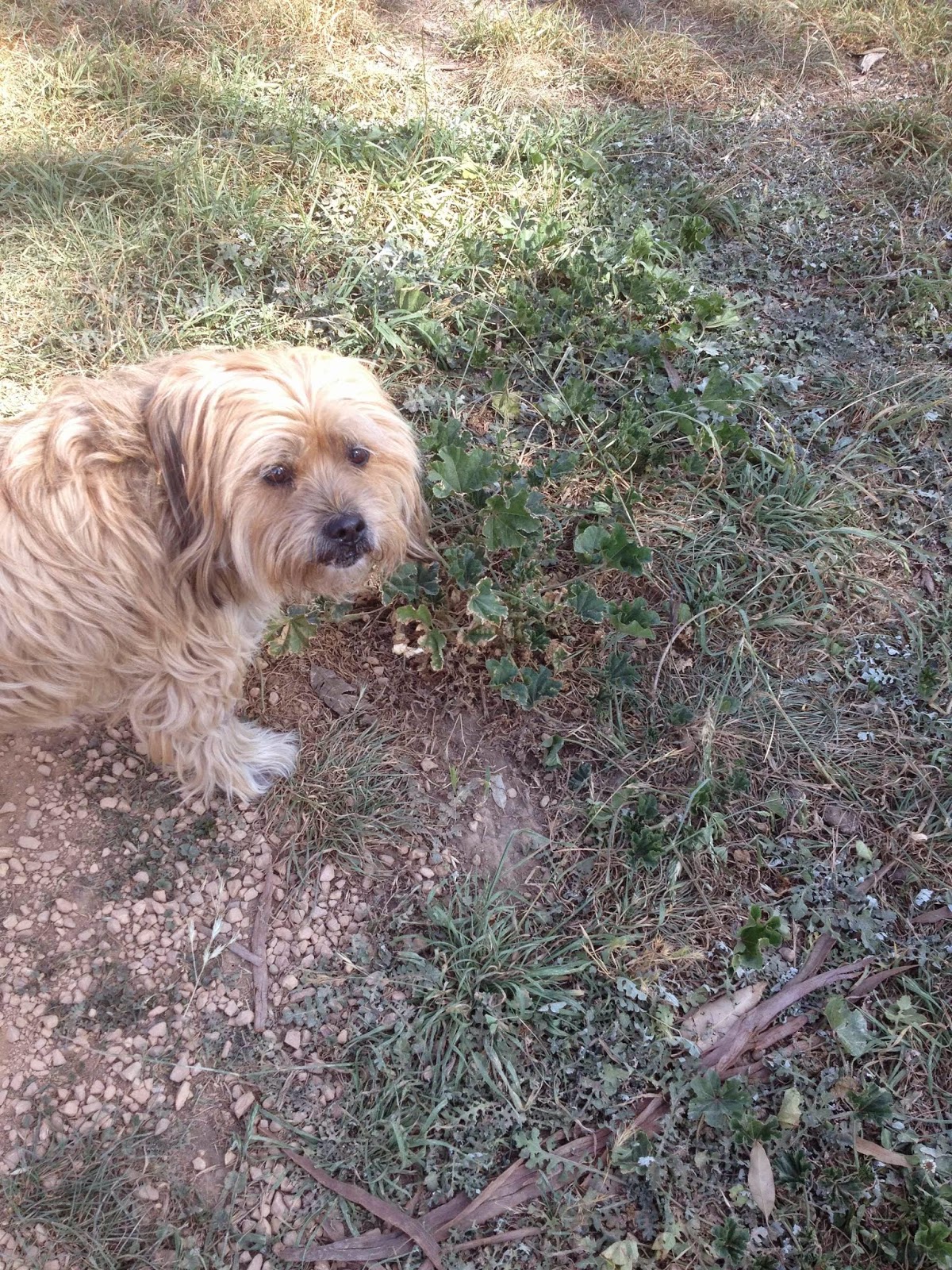 Our mallow at home: 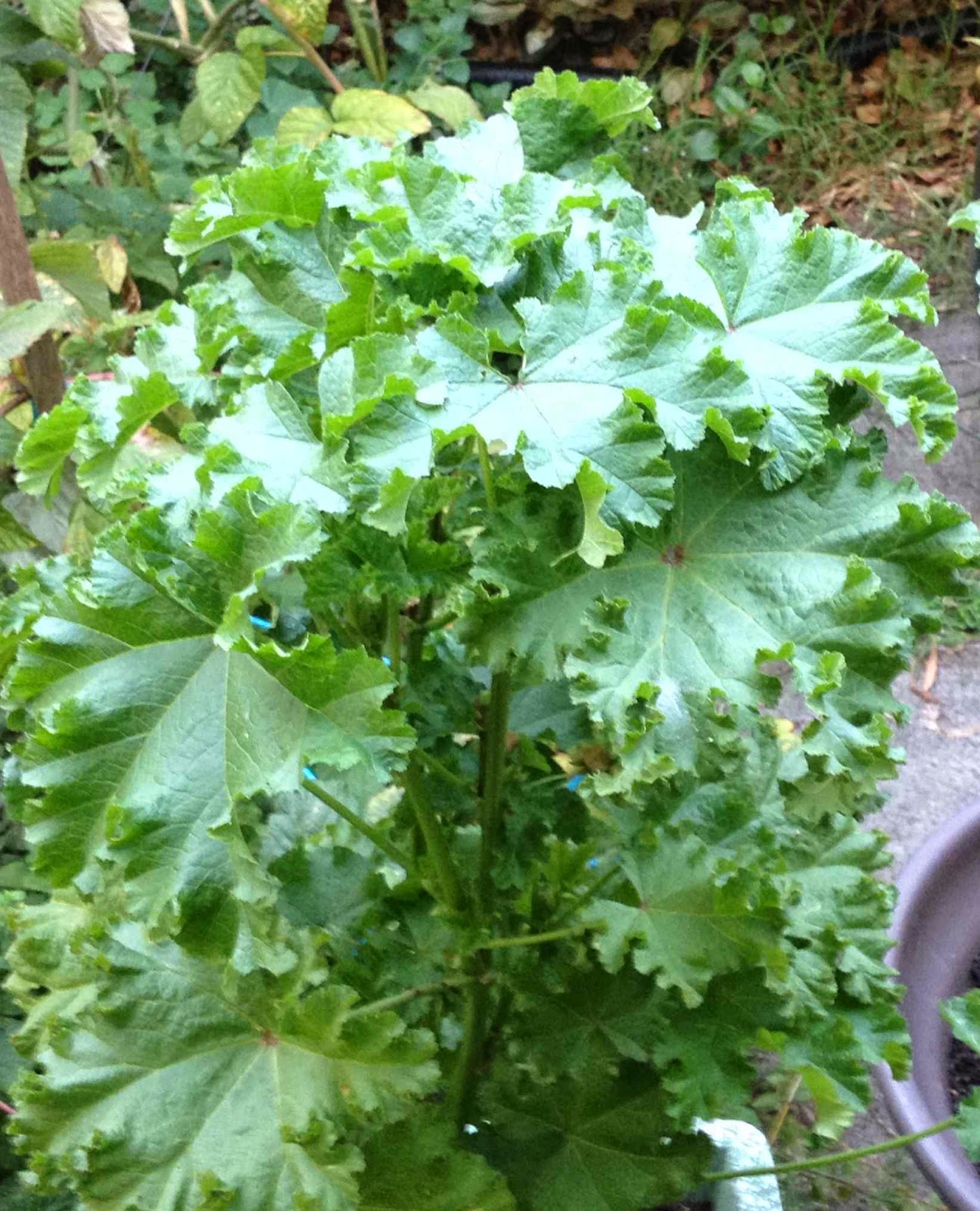 Penny is quite laid back about an exciting encounter

Today, as we were walking in a nearby park, we saw a dog approaching - and he looked like Penny.

Now, you have to understand - no dogs look like Penny! People are always asking us what breed she is, and we say, she's a 'bitser'. That's Aussie slang for a dog who's 'a bit of this and a bit of that'. 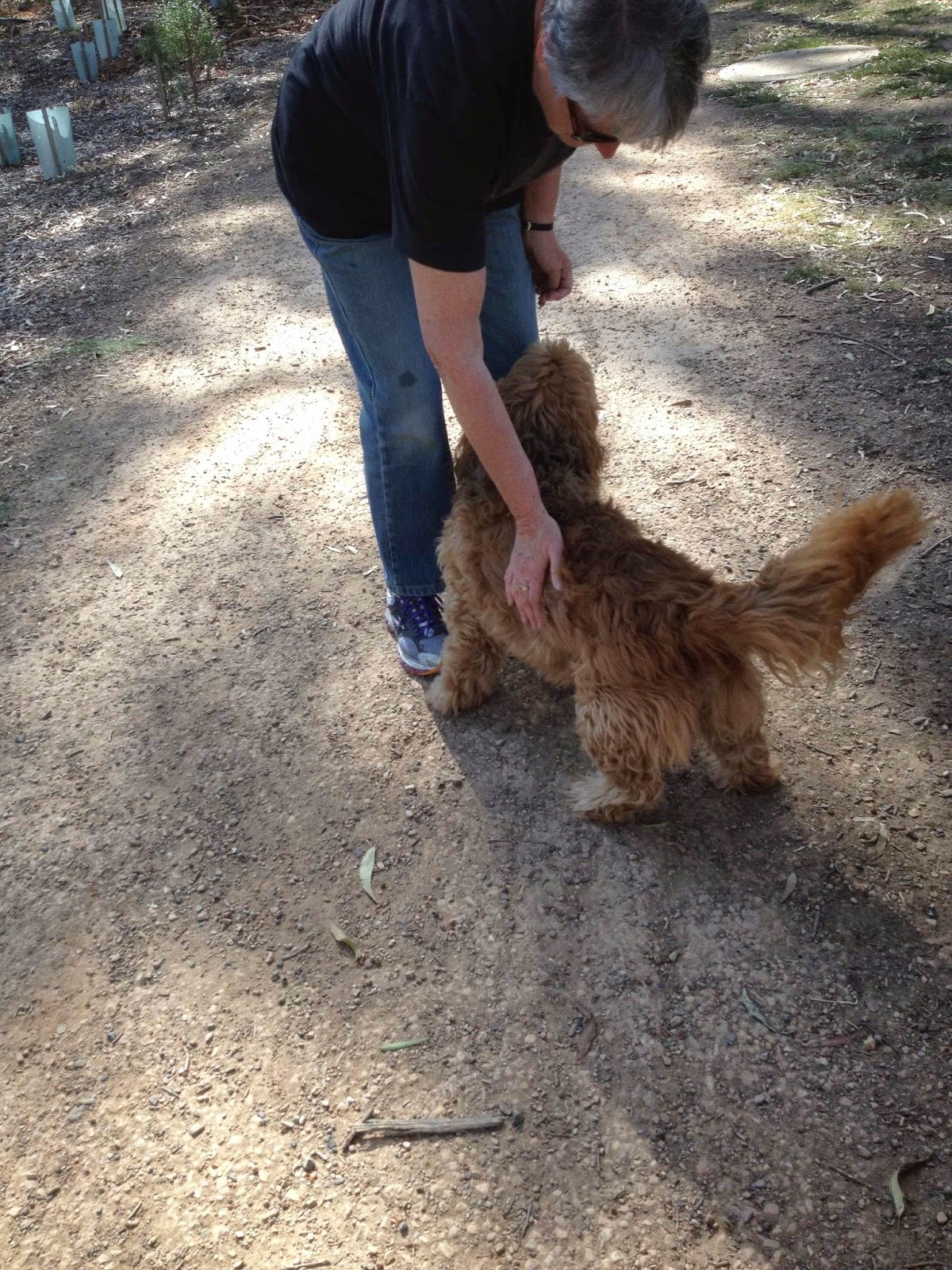 Ever-so-casually, I said to the woman with him, 'What breed is your dog?'

My heartbeat sped up. That's what we think Penny is. I said, 'Did you buy him from your vet?'

OMG! This was Penny's brother. When we decided to get our first-ever dog, we didn't know whether we could cope with two dogs, as beginners. We paid for Penny and left her to grow a little older with the one remaining litter mate, but said that if he was unsold when we returned for her, we would take him too. We had mixed feelings when we heard someone had bought him.

It was wonderful to know he has a loving home and is happy.

Penny's named after the copper coin, because of her puppy colouring, but has long since become a blonde. He, on the other hand, is still coppery. When you see them together, the difference is plain. 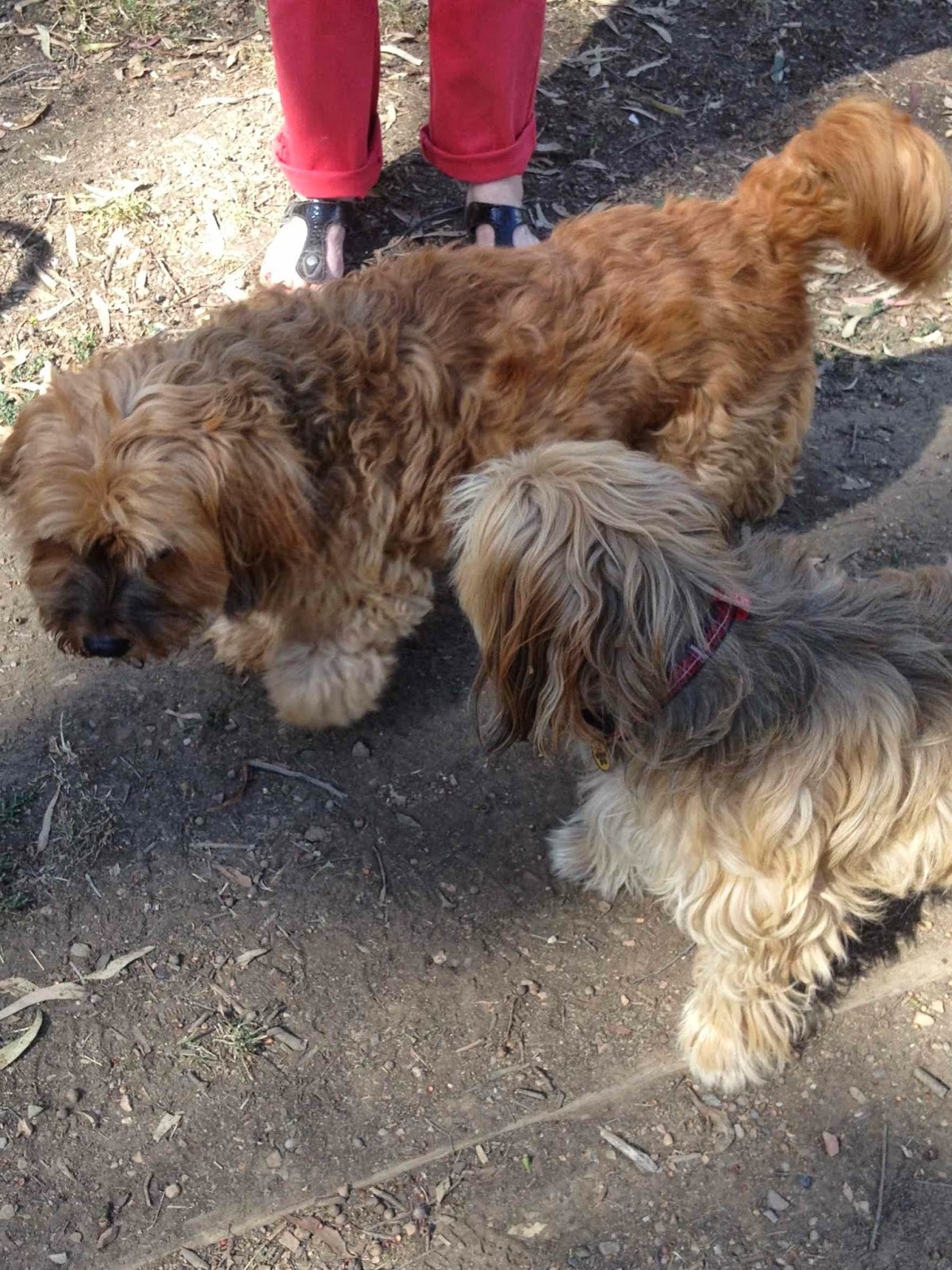 It was such a happy and exciting meeting that I can't resist posting lots of photos. 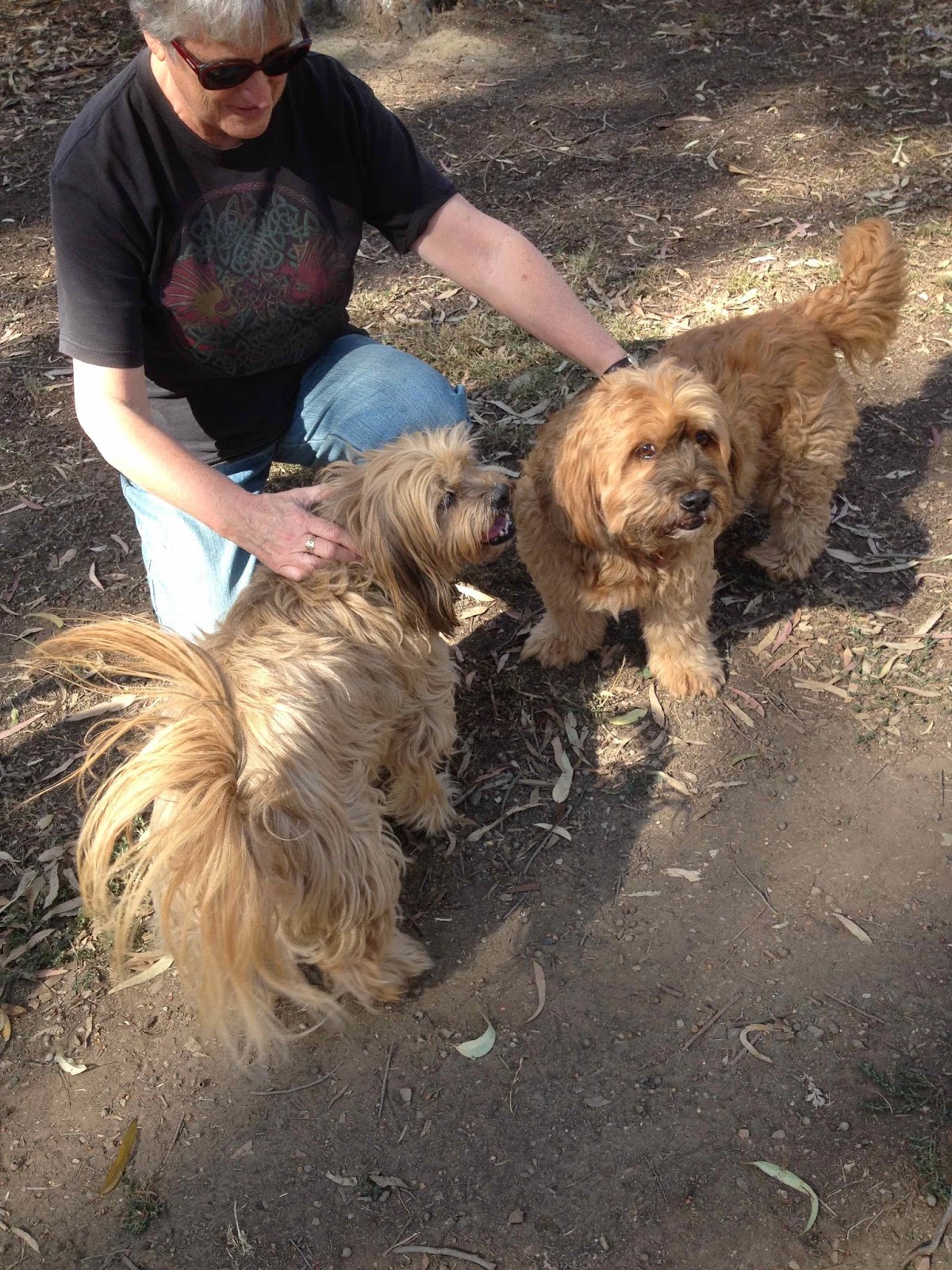 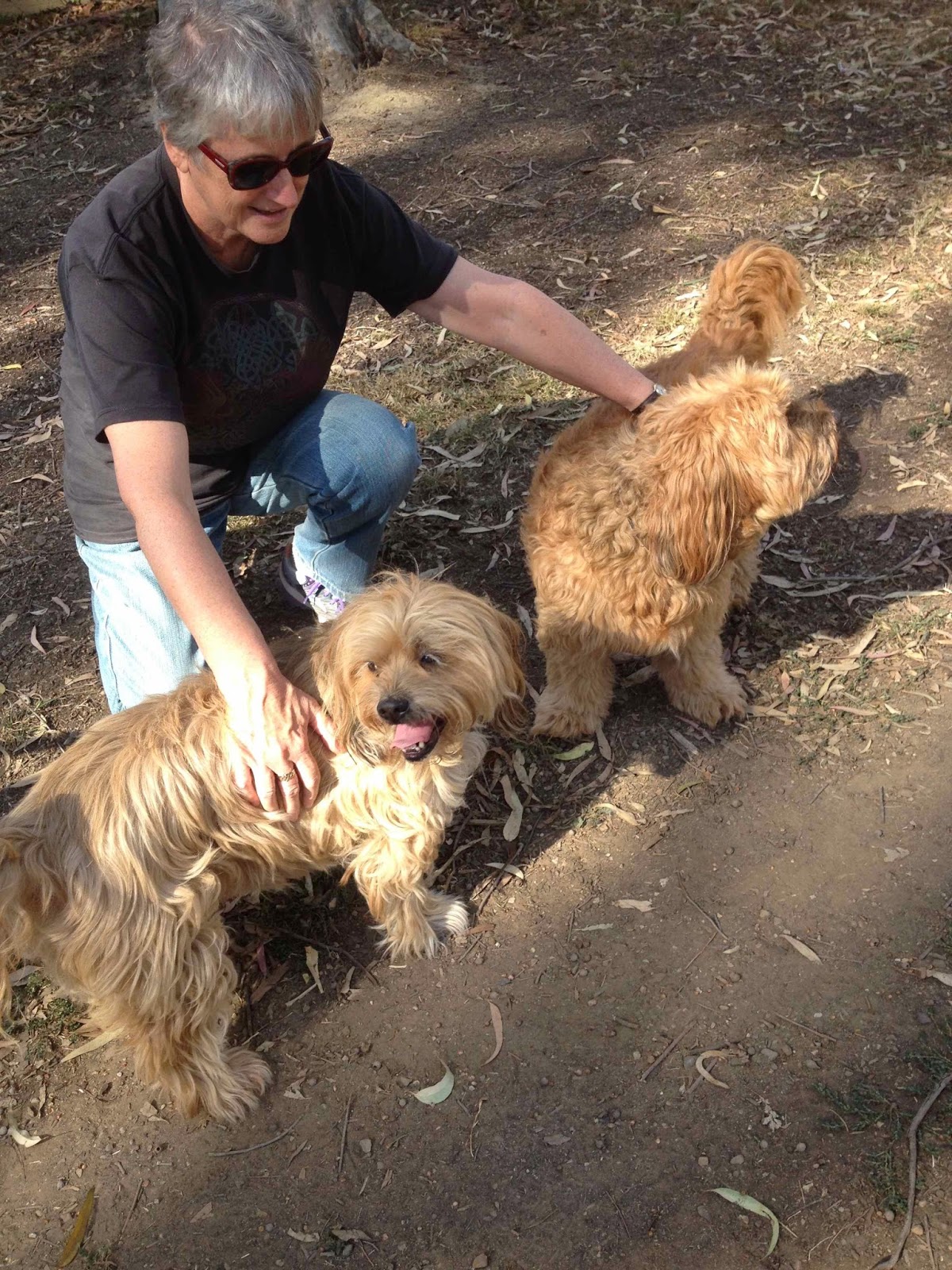 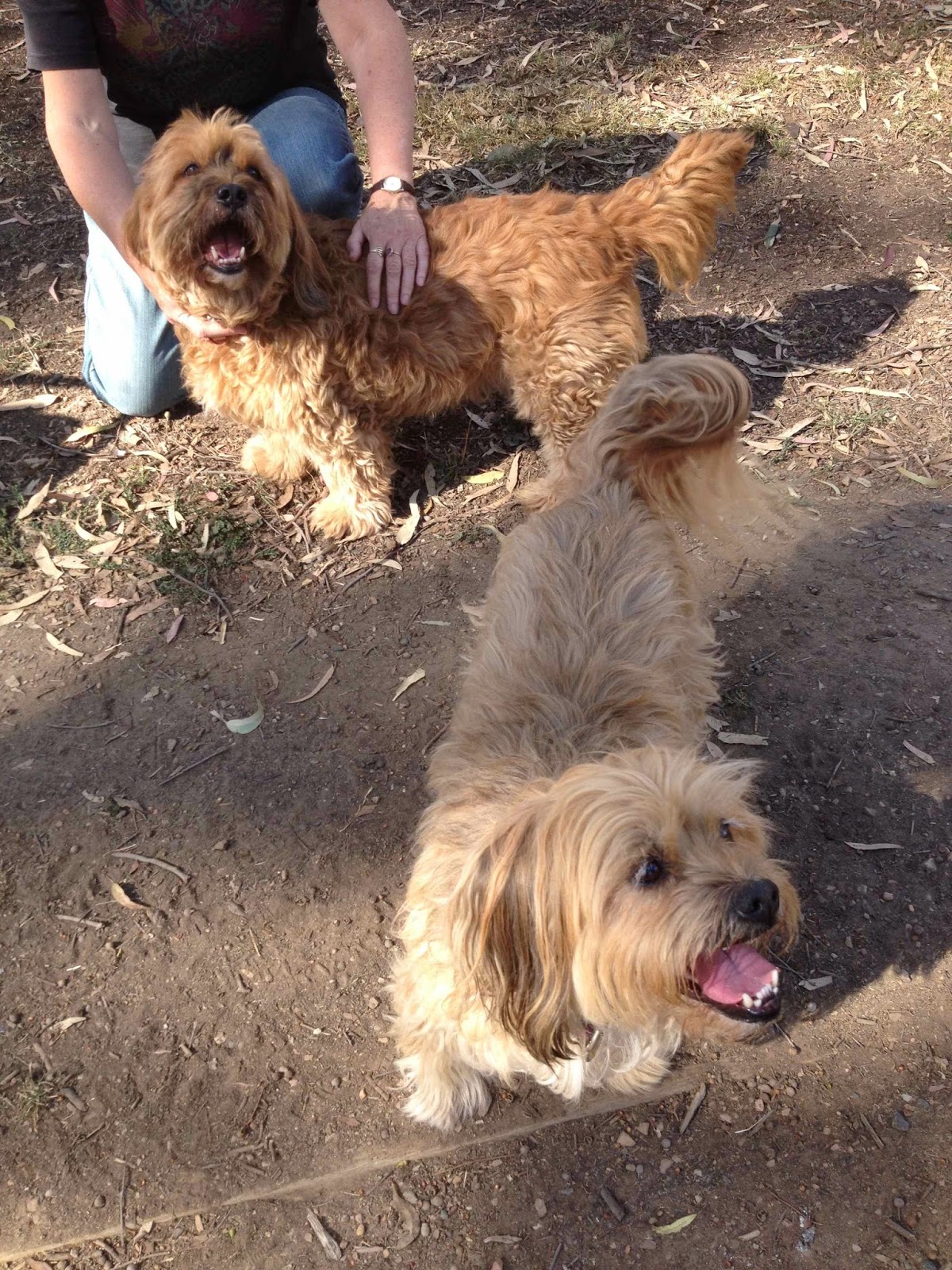 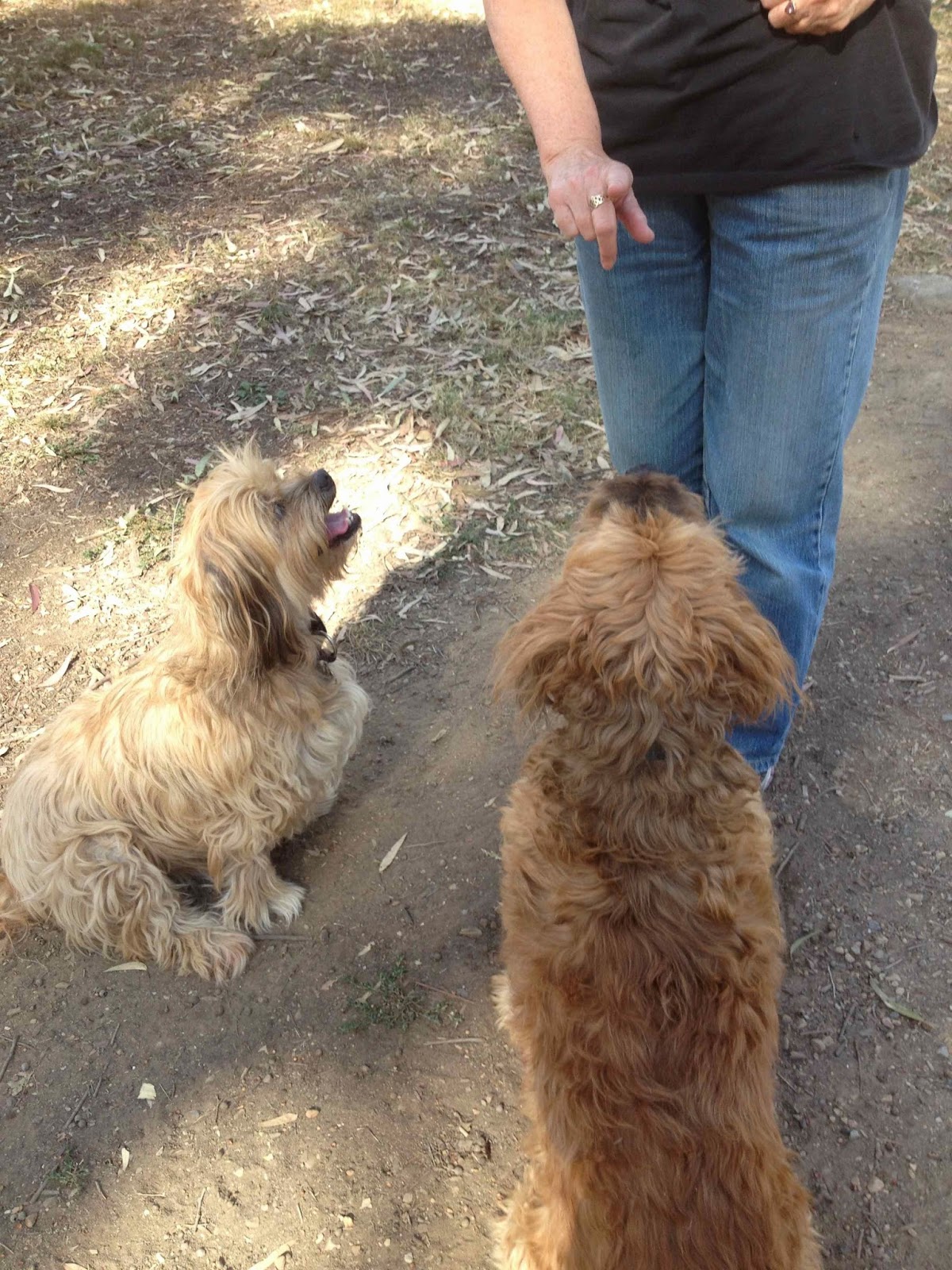 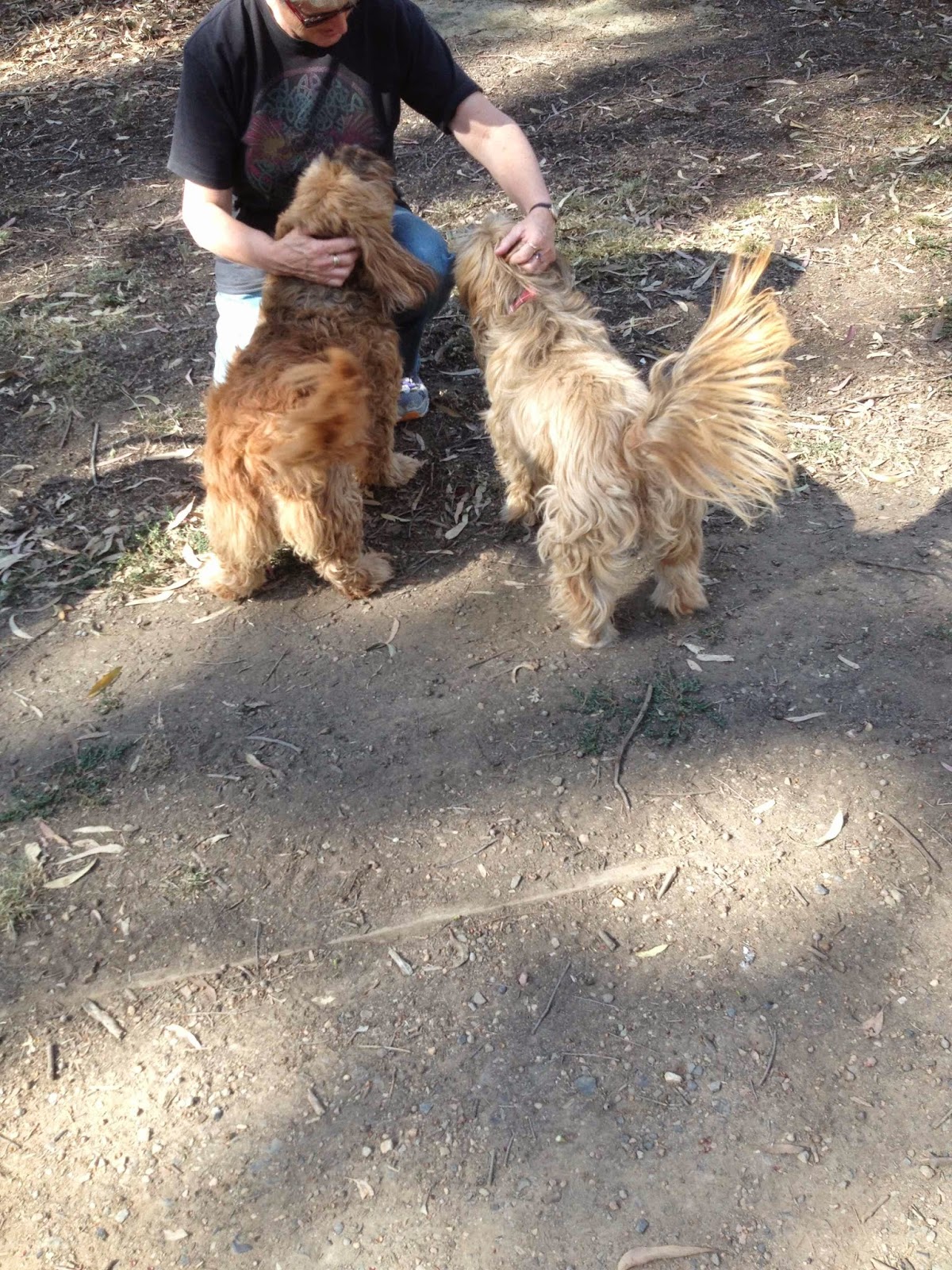 No one seems to be discussing the weather lately, which is strange for Melbourne. I guess we're all just glad we didn't have many bush fires this summer and we're enjoying the glorious cool, sunny weather.

But when will we get some proper rain?

We walked in Darebin Parklands today and it was disturbing to see how dry everything is. 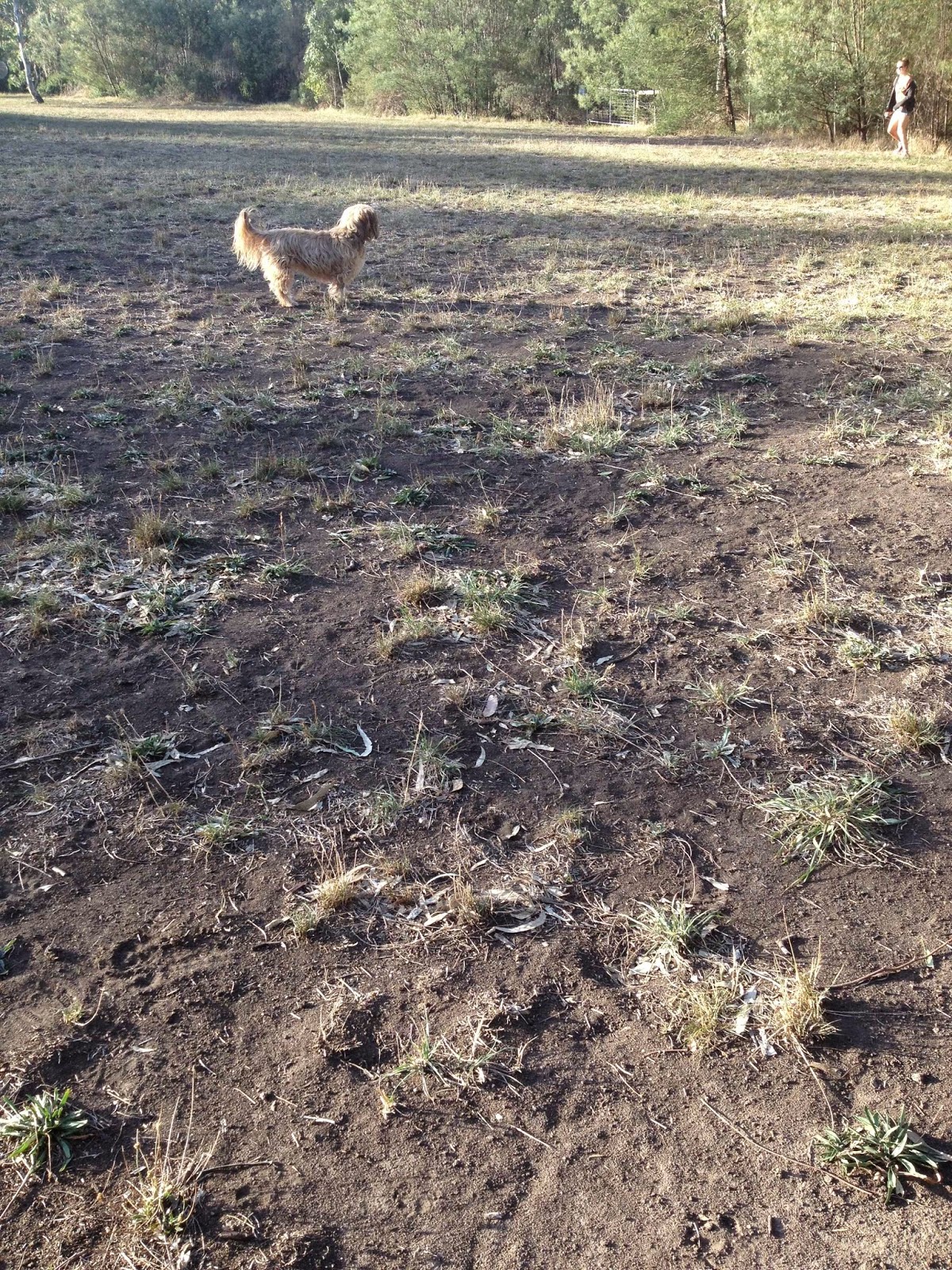 I'm interested in weeds, especially the edible ones, but I didn't recognise the plants that are surviving in the desert landscape of the dog area of the park. I wonder what they all are? Some were dandelions, those mineral-filled nutritious plants that are so ubiquitous, but they were the only ones I knew.

In one area where there has been a bonfire, a baby wattle has sprouted. I think I read somewhere that wattles are one of the first-line plants after a fire. They grow, add nitrogen to the soil, and prepare the way for other plants to colonise. 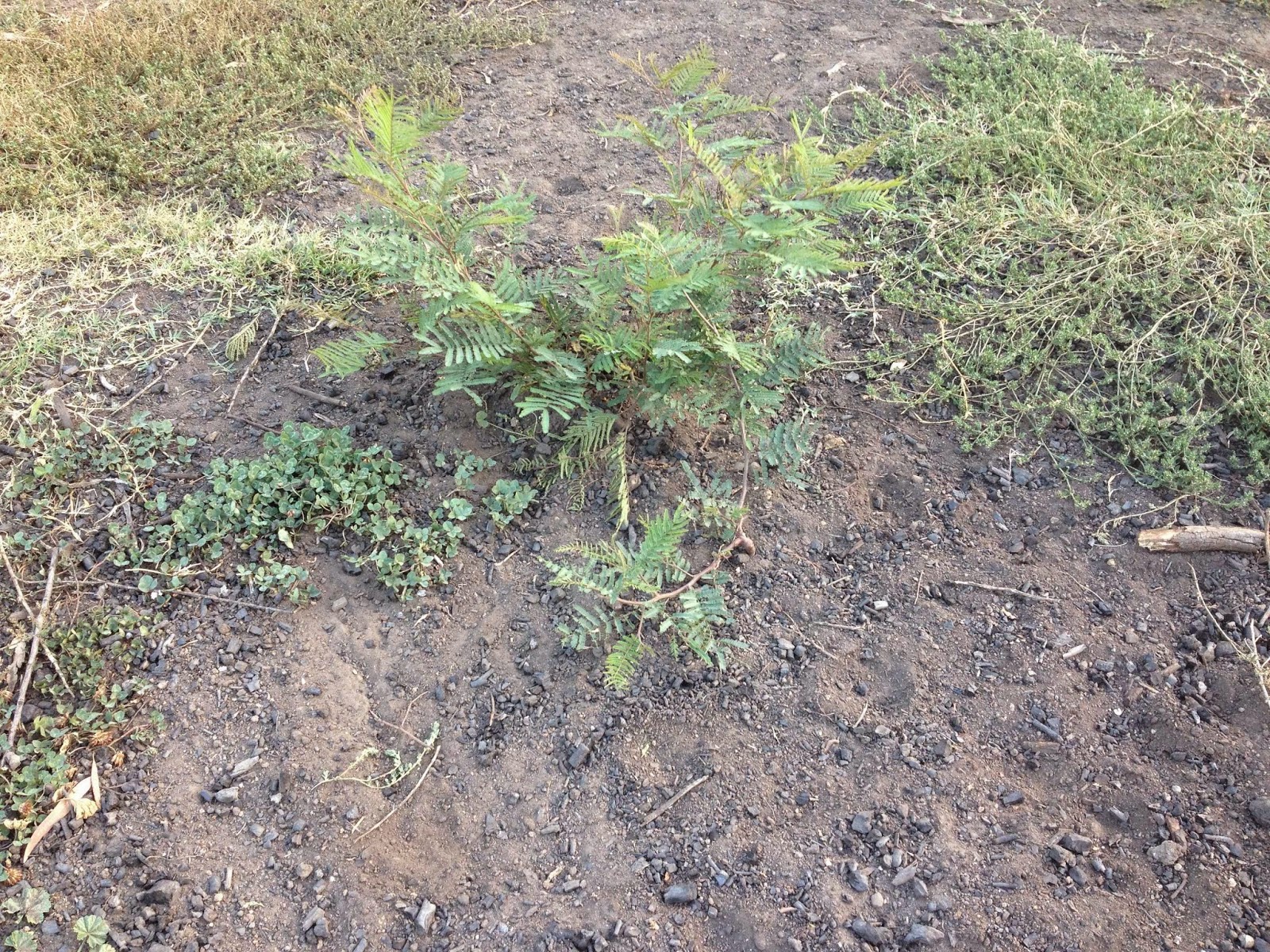 Seeing that little plant made me think of the plant that has sprouted in one of my vegetable beds in my own garden. (I've transplanted it, but I'm not sure it will survive.) 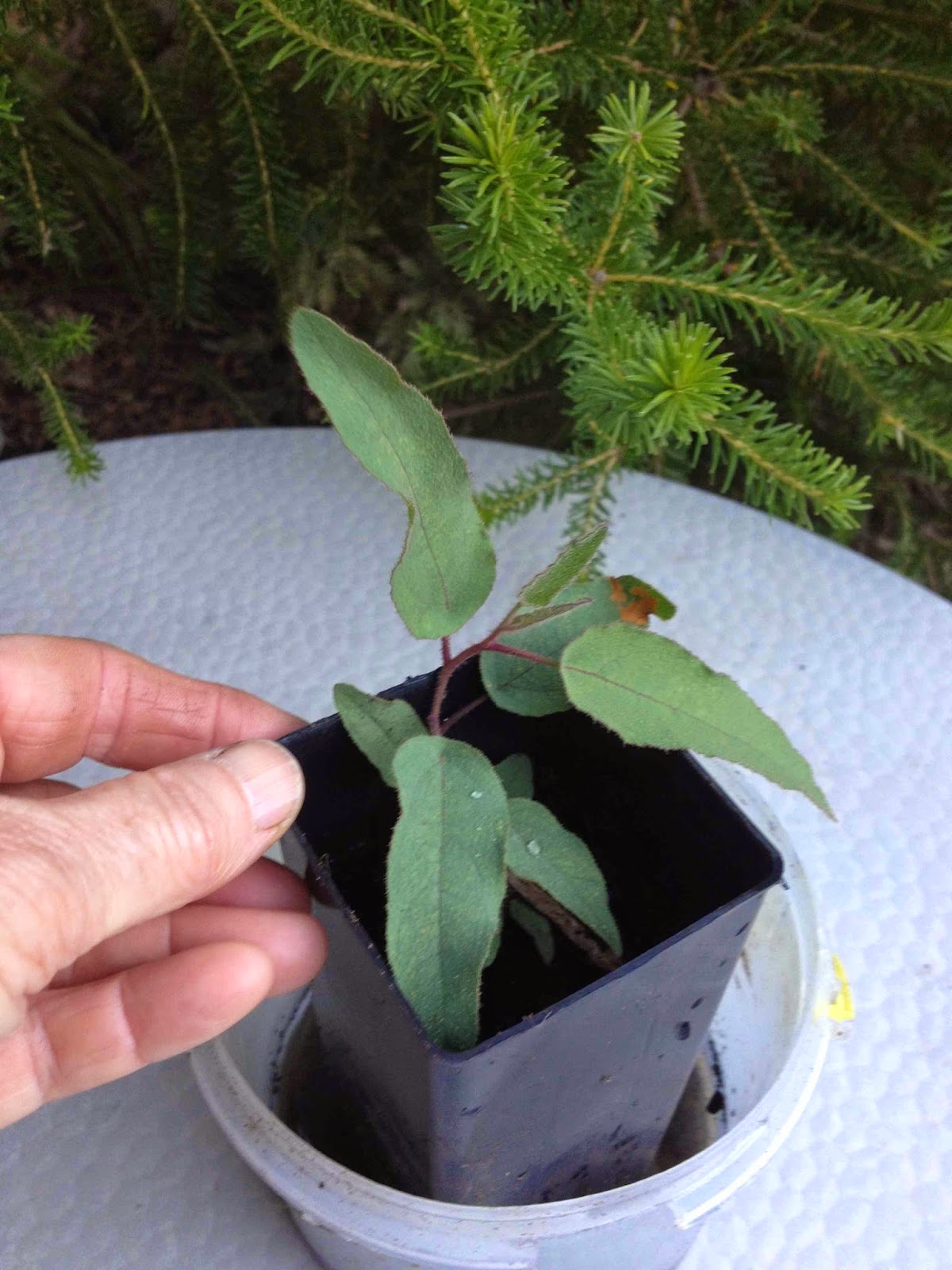 It's a baby lemon scented gum, probably offspring of the giant in our street. (The tree is so tall I couldn't get far enough away to get the whole tree in this photo.) 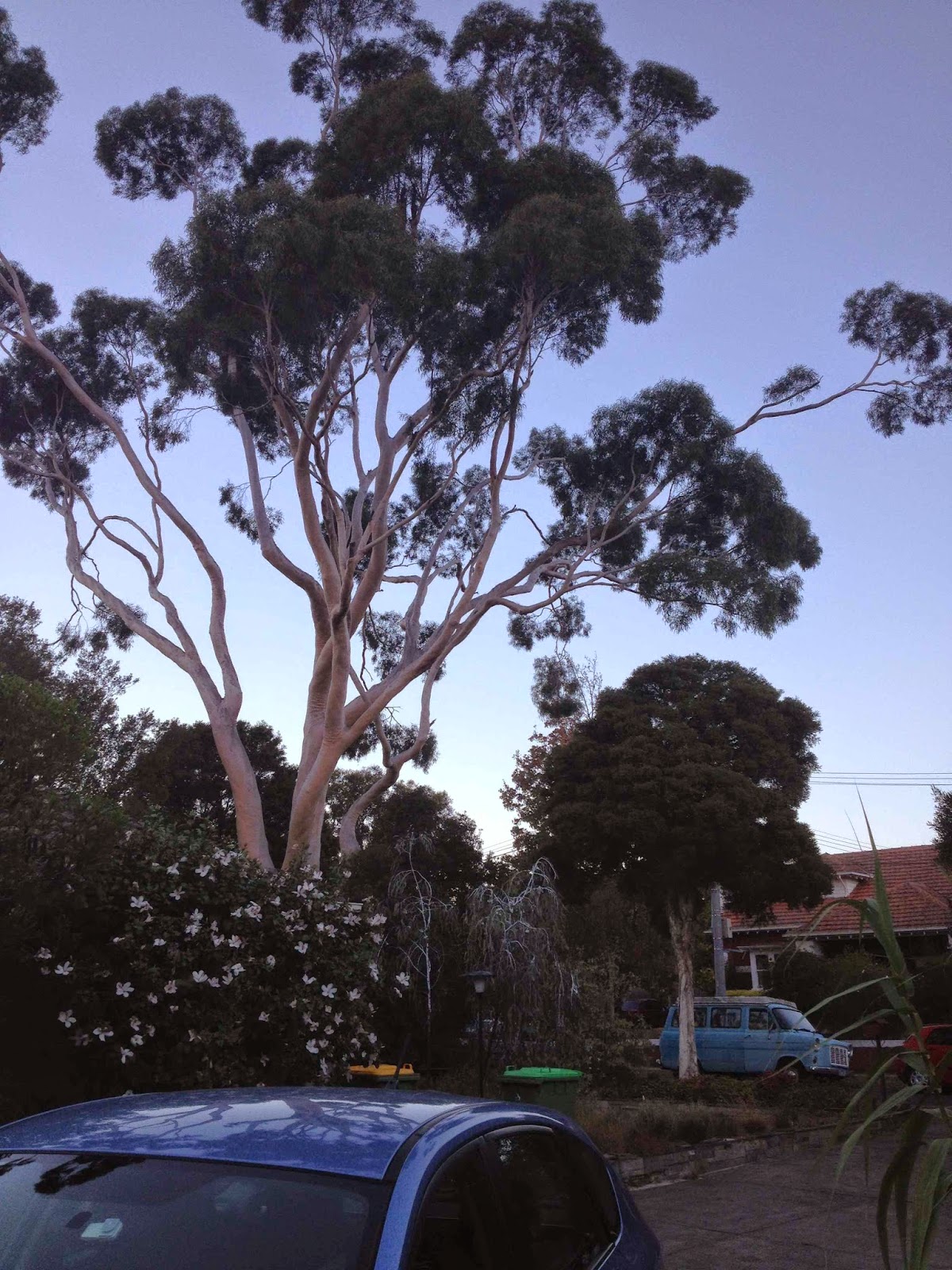