There are a few photos of dog vomit in this blog, so don't read on if you think it will upset you. However, I'm posting it because when Penny threw up in the park yesterday, we couldn't find good information on the internet, and I hope this post will be helpful to others.

It seemed like a good idea to have a walk before breakfast yesterday, so when we set out, Penny had an empty stomach. That may have something to do with what happened.

As we walked, I took a photo of the lovely, typical wattle. All three of us were happy. In retrospect, examining this photo, I'm wondering what Penny was doing. Eating something? Grazing on grass? 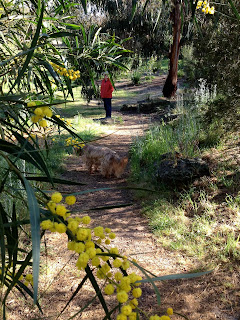 Anyway, a few minutes later, she threw up a handful of grass in yellow froth, as she occasionally does. It was yellow, which is not really clear in the following photo. 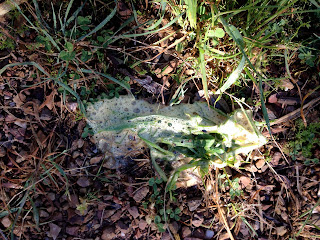 We weren't too concerned, because it was likely Penny was just using the grass to settle a bit of a tummy upset.

But a few paces further on, she threw up orange froth, with a small blob of blood in it. 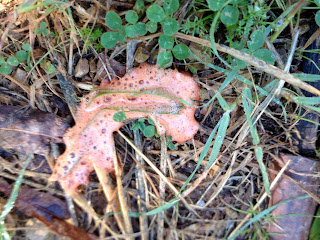 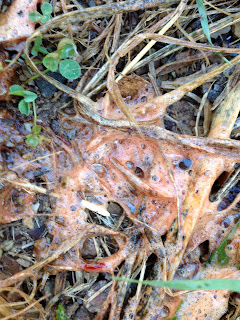 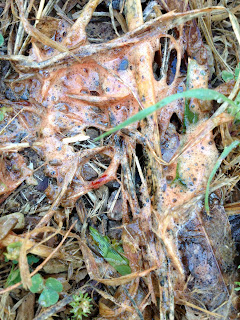 She seemed fine, but we slowed  down the pace of the walk and made our way back to the car.

Penny was her usual self as far as we could see, during the rest of the day, but we fed her only tiny meals of boiled rice and chicken - we gave her a little handful about four times over the course of the day.

This morning, however, we began to think we should get her checked out at the vet. So off we went.
He believes Penny might have ruptured a little blood vessel in her stomach when she vomited the first time and that's why she threw up the orange froth.

We're continuing the rice and chicken diet, but today we have introduced some of her normal treats (for instance, when I was bathing her this afternoon).

She seems fine. Time will tell, of course. It's reassuring to have visited  our vet, though. 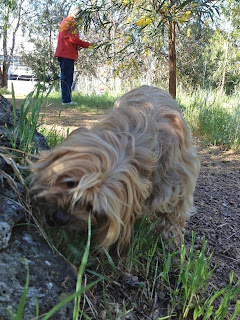 And when I look at what Penny was doing while we were admiring the beautiful yellow wattle, I think she was already eating grass.

We hope your tummy is feeling better, Penny! We both love to eat grass too.

I admit I didn't read this post about vomit. I just scrolled down to the bottom without looking at any pictures. I bet it was an interesting story though. Hope everyone is ok who had orange vomit!

Lassie and Benjie, lucky you didn't look at the pictures! It might have made you sick, lol.

Thanks, Mitch and Molly. Penny's better but not completely well yet.

I know I'm a bit late in that I'm writing this about 2 years after, but I was wondering if I could get an update on what's happened since then and also a clearer answer as to what the resolution/appropriate action for this occurrence is..?

My little baby had started up throwing up yellow and has since moved to throwing up orange throughout the entire day as well and I'm quite worried since this has never happened before >.< There isn't ALWAYS blood visible and the times I see hints of red, I'm never 100% sure if it is actually blood since they're such tiny specks :/

I'm planning to take him to the vet first thing in the morning just to be doubly sure but since our situations seem somewhat similar and vomit color seems the same, I'm interested to know what happened on your end.

Thank-you so much for sharing!!

Did you go to the vet? Penny was fine after this throwing up, and I think the gentle diet of boiled rice with a little boiled chicken helped her.

I'd love to know how you got on. I think it's always best to go to the vet. I know it can cost a bit, but peace of mind is good.

Hi , my dog has started feeling sick last Wednesday night... he vomited 3 times grass and white foam, then kept on vomiting white foam until the next morning... we counted 12 times in total, he didn't eat on Thursday and was a bit constipated... we called the vet and he said to just keep an eye and if it continued the next day to take him... on Friday he was way better.. he even ate boiled chicken and white rice and he didn't throw up all day... Saturday he ate well too.. he even switched back to his dry food.. on Sunday he was back to normal but today is Monday and he was ok... until I took him out to pee.... he pooped actually but it was runny... kind of like diarrhea, and then he threw up a bit of orange foam... I got worried and I haven't called the vet yet but I wanted to see on google is it was really bad and then I came across your blog.... what should I do though.. I'm worried :(

Suziie, my advice is to take your dog to the vet always if you're worried.

Hi, LT2018, I hope your dog has recovered from the vomiting episode and I'm sorry I didn't see this comment earlier. I've removed it because from the address I wasn't sure you are a real person, so just post a comment again and tell us who you are and I'll reinstate the comment.

Thank you for the information its very helpful, today during the morning walk my sugar golden retrieve also vomited same orange foam , and I am so worry about her . I'll take her to the vet for check .

I hope your sugar golden retriever is okay. Over Penny's long lifetime she vomited lots of times, but I'll admit when it was orange I was a bit more concerned than usual. I always think it's worth a visit to the vet if you're worried that something is not normal.