Curator called by today to ask how Penny's been going since she caught her paw in her collar recently.

It's kind of complicated...

She does have a very sore elbow, and we're wondering whether it's a long-term injury from that incident. On the other hand, last weekend she visited a house in the country where she climbed up some steep slippery stairs, because she insisted on sleeping upstairs with her humans.

So, not liking seeing her in discomfort, we arranged to visit the vet on Wednesday. (She's been so sore she won't put her front foot on the ground at all. Very worrying.)

And then, the night before the vet appointment, she threw up - twice. First time sort of okay, and she was still hungry, so we thought it was normal. (I'm sure I don't have to tell you how we knew she was hungry... But we managed to hurry her away before she ate the thrown-up meal once again.)

The second time, the 'product' looked really horrible. Human Number Two even reckoned it looked like dirt. I said, 'No, it can't be. Why would she be eating dirt?' We looked around the garden to check whether she'd dug up that nice old brisket bone she had buried a few days ago, and thought maybe that was it, but no bone fragments in the pile of you-know-what.

When I went to the vet, he agreed that vomiting can produce something that might look like dirt. But since she seemed fine as far as her digestion goes, we decided to just concentrate on getting the sore elbow fixed up. (Back to the vet tomorrow to see whether the anti-inflammatories are doing the job.)

I'm a keen gardener. But I  wouldn't be so silly as to lay down a fine bed of delicious blood-and-bone and cover it with a delightful layer of highly enticing half-rotted compost, would I? Well, maybe, but I'd make super sure to do it in an inaccessible garden bed with a metre-high brick wall around it.

The latest theory about the sore elbow is that Someone has been digging in that bed. There are paw prints. Holes have appeared in the smooth layer of compost. Who could it be? If that Someone had managed to leap into the bed via a nearby upturned concrete pot, she might conceivably have injured her elbow as she leaped out.

But just in case, the garden bed now has a strategically placed garbage bin blocking access and it has a strong cover of wire mesh.

Now it just remains to get Penny well and active again. No walks allowed. No going down the back steps to the yard. Tedious trips down the sideway to reach the backyard without using the stairs.

take off the dog's collar when at home

Penny gave us an almightily fright this morning.

She had been doing her usual yoga routine - a few downward facing dog poses, the extended puppy pose, perhaps the sphinx pose and maybe even a cat pose. I walked past her and into the kitchen.

Next minute she hobbled past me with a seemingly broken leg. Totally broken, bent up near her ear. Even imperturbable Human Number Three agreed with my cry of 'Omigod, better rush her to the vet emergency hospital!'

How could such a terrible injury happen in one minute flat, in the lounge room of our home?

She had caught her toe in the metal ring on her collar. Can you visualise her, hopping along on three legs, with the right one bent above her head?

Poor Penny! It was quickly remedied, because the collar had a quick-release buckle and I don't think there is any lasting harm done. But she won't be wearing her collar in the house again. (We usually take it off when we arrive home from a walk.)

I do remember reading years ago about the danger of collars when dogs are at home, and just now I've visited another site with a horror story of a near-death experience that was worsened by the fact that the collar did not have a quick-release catch.
Posted by parlance at 19:34 10 comments:

You can lead a dog to a new bed, but you can't make her lie on it.

This will have to be my new saying, because I spent more money than I like on a fancy new bed for Penny today and she's NOT interested.

Here's the old one, which is looking pretty worn out. 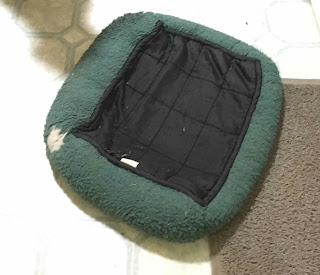 And here's the new one, with Penny looking rather worried about it. 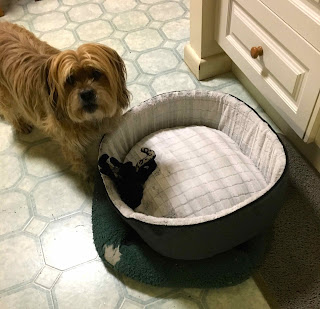 We have the new one sitting on the old one, in the hope that the 'nice' smell might rub off on the new one.

It's probably not going to happen, because the new one is really too small. And we can't return it because we let Penny play with it and toss it around the kitchen to help her see it as a fun place to be.

Oh, well. Better put it down to experience and scan the internet  for a bed that looks like the old one.
Posted by parlance at 23:37 4 comments: