When Penny and I spent a week at Best Friend Retreat, I thought the most enjoyable place was the Ninety Mile Beach, but I suspect Penny preferred the other swimming places, because she didn't seem to like the waves at the surf beach.
One great place was right next to the resort. It had a lovely deep pool on the Tarra River for dogs to swim, and a rocky waterfall where humans could sit with their feet in the water. However, one kilometre down the road was a spot I liked even better, and Penny adored - also on the Tarra. 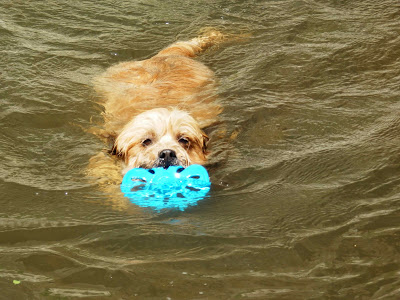 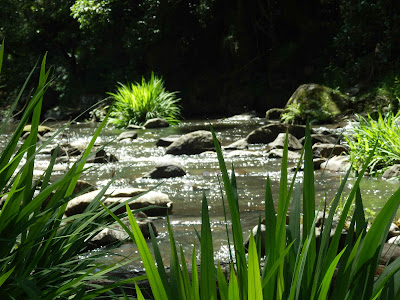 We also drove about thirty kilometres to Port Albert, where there is a calm bay (no waves at all on the two occasions Penny swam there) and a lovely walk along the shore. The dogs jumped into the water beside the path at one stage and cooled off among the mangroves, but in general we just walked along the path. 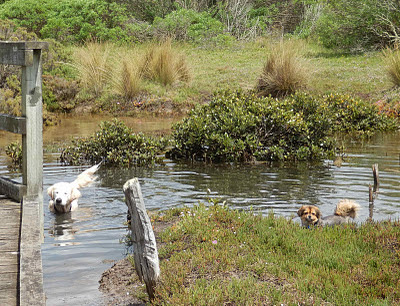 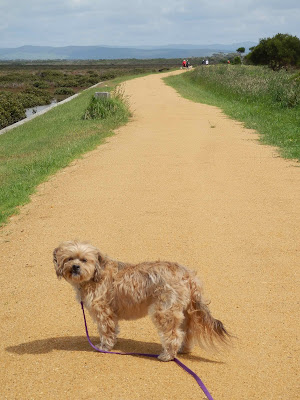 Penny has been away from home for a week, enjoying the magnificently dog-friendly resort at Best Friend Retreat at Tarra Valley, near Yarram.

Many places will accept dogs accompanying their humans, but at Best Friend the dogs are the guests and their humans the companions! Dogs must never be left alone. So humans take the dogs everywhere with them - unless they want their dog to spend the day in the reportedly luxurious kennels. (We didn't use them, so I can't describe them.)

Our trip was organised by Cindy, who had a birthday while we were there, so of course we had a party. The barbecue area is great for parties, because the dogs can come in with the humans, but we thought they should stay out in the little fenced yards until we had cooked the meat - for obvious reasons. 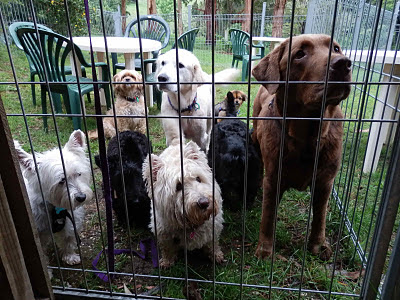 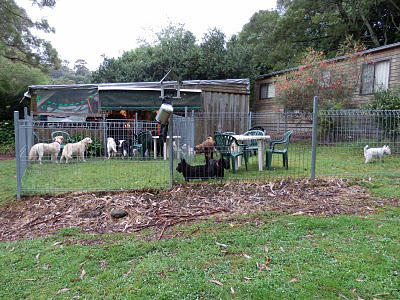 Tarra Valley is not far from the pristine Ninety Mile Beach, where dogs are allowed off-lead, so each morning we set off for long, long walks. 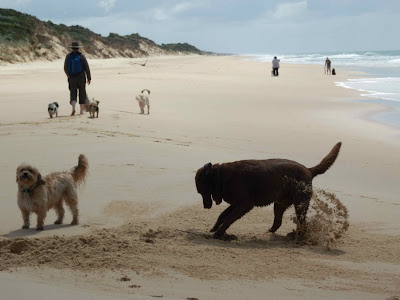 a dog and some sticks in the muddy Yarra River

As I said in my previous post, Penny had a swim in the Yarra the other day. The river was running fast, so I threw her sticks quite close to the bank.

But all of a sudden a really interesting, delightfully large stick came speeding along on the current and Penny wanted it. 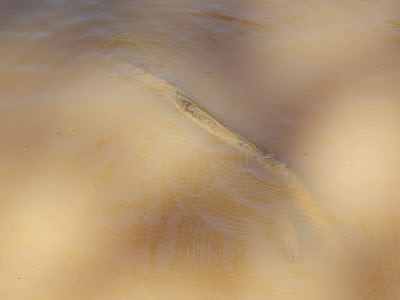 She followed it along the high bank, looking down and wondering if she could jump that far. And I followed her, hoping she wouldn't do so, but interested to see what she would do about the problem. 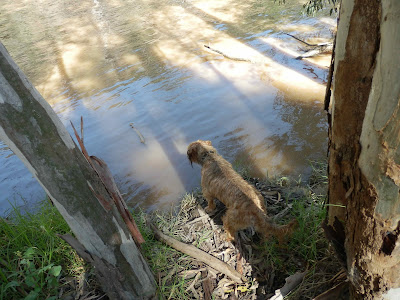 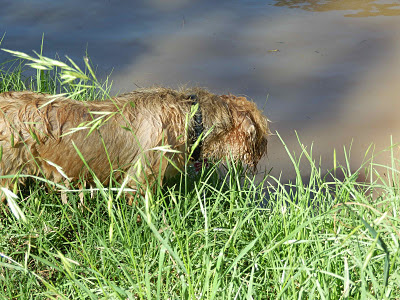 But then the stick upped the ante by drifting into a dangerous clump of branches sticking out of the water and Penny began to gather her legs under her, preparing to leap. 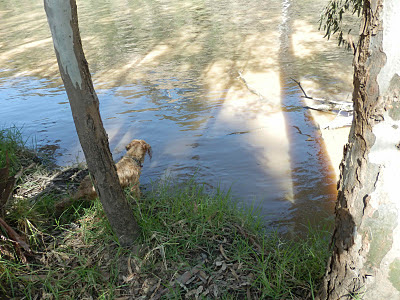 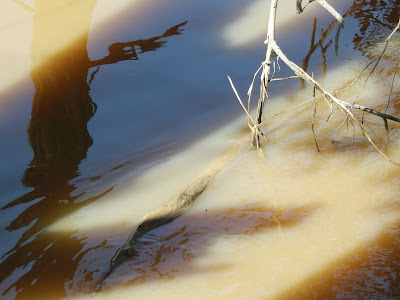 It was time for intervention. So I hurried back to a safer entry spot and threw another stick in (a little one was all I could find) and - thank Dog - Penny ran towards me and jumped in to get it. 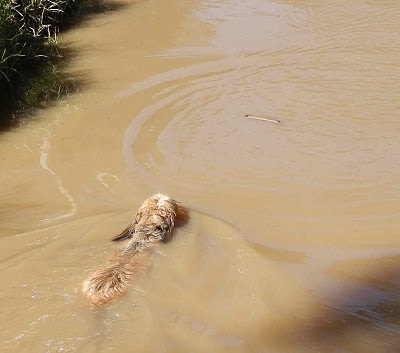 It must have been a good one, because she carried it all the way back to the car. 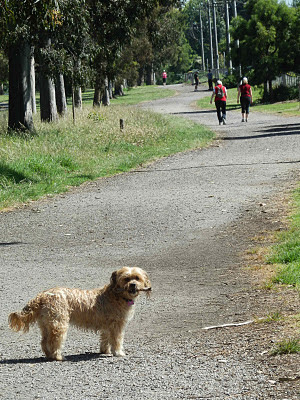 a dog swims in the upside-down Yarra river

Last weekend Penny and I went to Yarra Bend park for a walk. At one end of the trail a sign welcomed us on behalf of the traditional owners of this land and I was reminded that Australia has a wealth of indigenous languages. 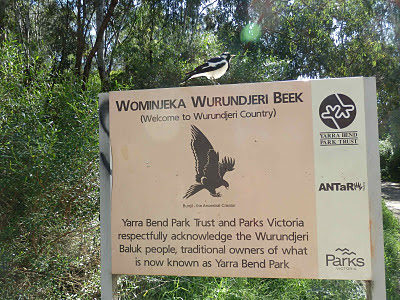 The Yarra, often referred to as 'the upside down river', was even more muddy brown than usual. However, this didn't mean it was dirty, so I let Penny swim.

The discovery of fresh water in the Yarra was crucial to the development of Melbourne. The river’s pristine upper reaches feed the city’s nine major reservoirs which supply most of Melbourne’s drinking water.

Further downstream however, the Yarra has long been dubbed "the river that runs upside down" because of its muddy colour. The water was clear at the time of European settlement but significant land clearing and development since the mid-1800s has resulted in suspended silt (or tiny clay particles) being carried downstream.

The muddy appearance does not mean that the Yarra is unclean. In fact, it is probably one of the cleanest capital city rivers in the world. Since the major clean-up campaigns of the late 1970s and 1980s, the river has again become home to platypus and a range of migratory native fish species. Platypus have been sighted in the Yarra River at Kew, less than 10 km from the city centre. 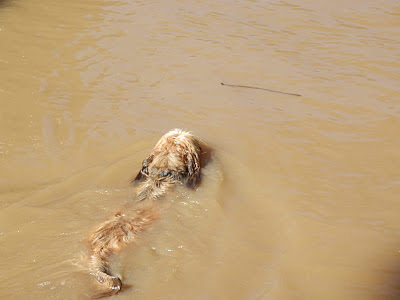 Penny stayed quite near the bank, which was good, because the river was running fast after the lovely rain we've had lately. I wouldn't have wanted her to be run over by the kayakers who were also enjoying the river.

Posted by parlance at 21:43 No comments:

the dangers of dogs eating beans

Most evenings we eat vegetables and so does Penny. Her favorite place in the house is near the food preparation bench, where she sits patiently waiting for off-cuts of vegetables - carrots, particularly. One thing she loves also is the end of a bean. We've been giving her little bits of green beans for ages.
Lately I've been growing broad beans in the garden, mainly so I can dig them in and add to the nitrogen in the soil. But last night the pods of beans looked so enticing that we decided to cook some and eat them. (Okay, those who know we were supposed to eat the beans inside, and not the pods, are wincing, I guess.) 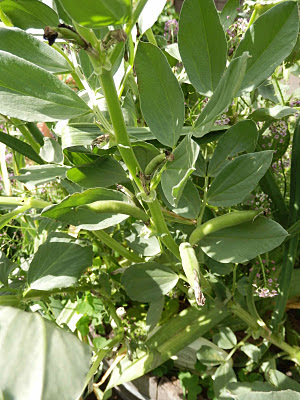 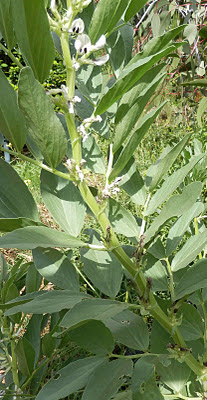 Human number two threw a couple of cut-off ends to Penny and decided to throw the rest in the compost, because of the funny whitish look of them.
Thank goodness she didn't give Penny the usual amount, because ten minutes later Penny was in the garden throwing up. And again, thirty minutes later, after she had her evening meal.
Of course, other than keeping an eye on her, it was immediately off to the internet to look for information.
First of all I came across this story, from bakers8:

I came home from work this week and thought that I would see if any of the broad beans were ready for eating. Upon viewing the vegetable garden I wondered at the fact that there were quite a few long stems of beans lying flat. It hadn’t been overly windy that day and it was dry. What had happened? Then I saw that there were no beans on any of the stems that were on the ground. No beans?

I puzzled for a while, picked some beans and went inside to prepare them for dinner. The chooks were happy to receive the empty pods and I thought no more about it – until M asked if I had fed Terry some broad beans. A lot of broad beans.

“Well” said M, “there are a number of piles of dog vomit around the yard and it’s all broad beans!” (apologies to the faint and/or those with vivid imaginations).

Sure enough, there was the evidence that somebody had decided to have a little smorgasbord prior to my return. And he must be feeling rather poorly as he hadn’t performed the other disgusting dog habit of cleaning up after himself!

I also found this on GardenWeb:

Beans in the family Phaseolus Vulgaris contain a chemical called Phytohaemagglutinin. If you cook it, the chemical is released and poses no threat. Raw, it's pretty nasty. In humans, eating small amounts of it via raw beans isn't usually fatal (from what I know, so don't read this, eat some raw beans then sue me when you die or get deathly ill), but even eating a small dose can cause some serious sickness like vomiting and general malaise and all. It's not usually fatal in humans unless larger amounts are consumed, but it's still dangerous enough to where I wouldn't eat raw beans.
It's dangerous though to most animals, not just humans. So, a dog would be just as likely to get it, if not more likely, as a human.

After all this research, I began to wonder whether my plants were in fact the same broad beans that others were writing about. However, I felt sure I had identified my plants correctly when I looked at the photos on this site, and read:

In much of the Anglophone world, the name broad bean is used for the large-seeded cultivars grown for human food, while horse bean and field bean refer to cultivars with smaller, harder seeds (more like the wild species) used for animal feed, though their stronger flavour is preferred in some human food recipes, such as falafel.
The term fava bean (from the Italian fava, meaning "broad bean") is its most common name in the United States, with broad bean being the most common name in the UK.

By the way, Penny seems fine today. Also, quite separately from her reaction to the beans, we scraped our own cooked pods into the compost because they tasted so awful.
Posted by parlance at 16:14 2 comments:

Penny has been clipped for the first time

In seven years of life, Penny has been groomed quite a few times, but we have never gathered the courage to allow the groomer to clip her. However, she is going for a holiday soon (more about that in a future post) and we think there might be paralysis ticks in the area, so we thought we should get her clipped to make it easier to check her each evening for ticks.

When I picked her up, I wondered who the beautiful stranger was. She looked gorgeous. Here she is at home, perhaps giving me 'the look' because she wasn't too pleased about having to visit the groomers. (Lovely ladies with a pleasingly professional attitude - I'm very happy that we've found this place. It's Hot Doggie in Warrandyte.) 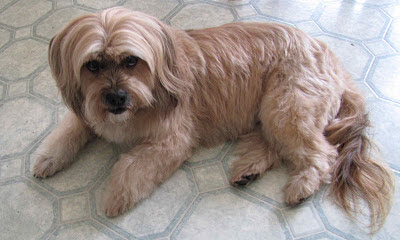 First item on her agenda was to get herself nicely mussed up, so it was out to her favorite rubbing seat. (It used to be for humans to relax in the outdoors. When did it become Penny's seat?) 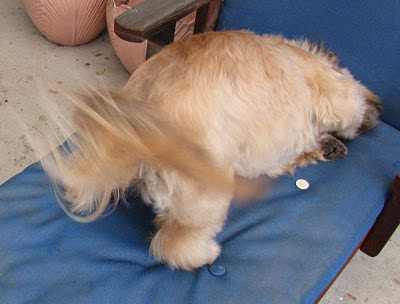 What a surprise! Penny is dark in some spots. Now that we can see her coloring more clearly, we are reminded that her brother was black. 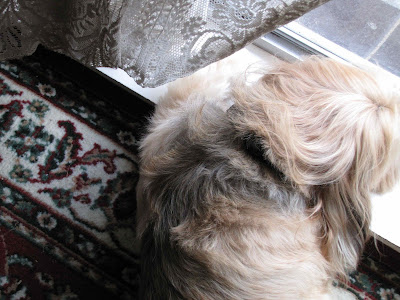 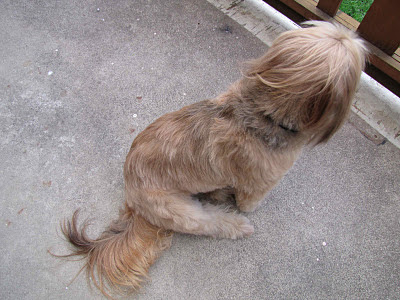