tale of a dog, a djembe and a kangaroo tail

One of the humans has a new goatskin stretched across his dejmbe, so of course he had to try it out as soon as he got it back after the repair. 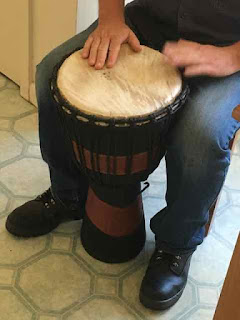 And of course Penny had to have a look at it as he placed it on the floor. Unfortunately for any future joy she'll have in listening to djembe rhythms, he gave a nice loud thump just as she looked up into the bottom of it. It sure must have been loud to a dog's hearing, as her head was inside the cavity of the drum.

So now Penny hates it. Here she is peeping around the corner of the next room to check what the scary noise is. 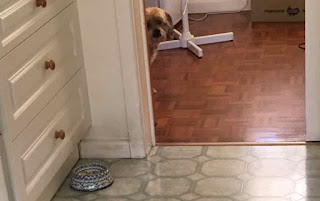 To cheer her up, I presented her with the enormous kangaroo tail that we recently bought for her. We got such a huge one because I worry about her choking on a small bone. (Yes, I know it was a bit of overkill.) 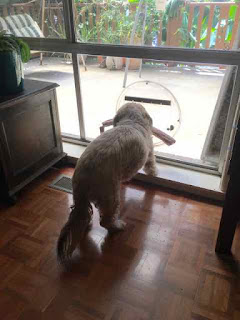 Until I took pity on her dilemma and opened a door. 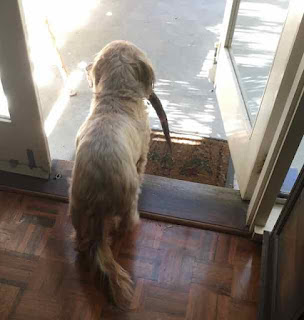 So the search began for a place to bury a long, long bone. 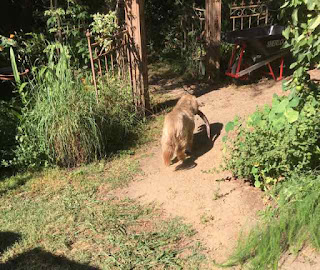 This way?  No, perhaps this spot? 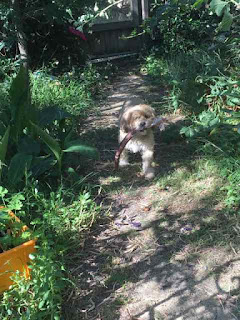 And finally, a good hiding place. 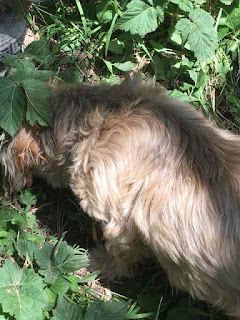 By the time she was finished, you couldn't even see there was a bone. I'm constantly amazed at how much dirt she can move with her nose. 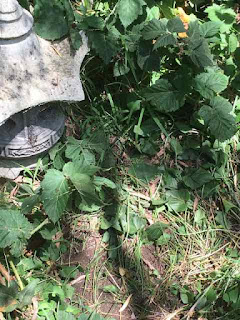 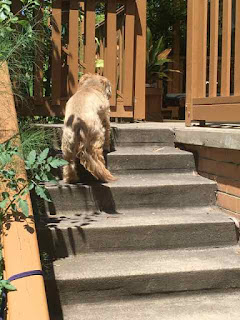 But then she changed her mind. She decided to fetch it. At this stage it wasn't a red juicy-looking bone. It was dark with soil. 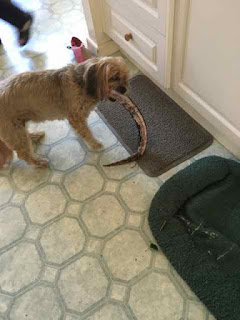 Eventually I decided she was panting so much I'd try to take it, as planned. I swapped it for a frozen cube of mashed vegetables in warm water.

Tinned sardines are our stand-by food for Penny when we've accidentally run out of the raw meat diet we obtain from Barking Good in East Ivanhoe.

We did try the raw sardines sold in that shop, but for some reason Penny wouldn't eat the non-tinned variety.

She get sardines about once a week, and I was pleased to read this article on Dogster about the benefits of this food.

We've always aimed to feed her only wild-caught fish, packed in fresh water. It's not always easy to obtain those, so we stock up when we see them, especially if they're on special.

One thing we will NOT buy is a tin of sardines (or any other seafood) from Thailand, because of the likelihood that the fish were caught by enslaved men. Penny's food, as far as we know, is not supporting the modern slave trade in Thailand.
Posted by parlance at 18:12 3 comments: