We often feed Penny cooked pumpkin, so I was interested to read this article today.

I think Dr Tim Entwistle is right. It's time we realised the 'seasons' we've inherited from Europe don't apply to Australian conditions. Today was summer and tomorrow is predicted to be spring. I'll start adding Dr Entwistle's Sprinter and Sprummer to my vocabulary. Or, perhaps I could investigate the traditional seven seasons of the earliest inhabitants of this area, the Wurundjeri people.


The Wurundjeri clan that inhabited the Melbourne area would often spend the summer months upon the banks of the Yarra and its tributaries. In winter, they would often head to the Dandenong Ranges (known as Banyenong) to make use of its timber for firewood and shelter. Wurundjeri divided their year into seven seasons rather than the familiar four. The arrival of a new season was based on the onset of a natural event such as the blooming of wattle or the first appearance of the blue wren.


As Penny and I drove home from another delightful Bowen session at Yarra Glen with Deb, we stopped at Warrandyte - lunch for me and a swim in the Yarra for Penny, seeing today was a foretaste of summer. We met some girls who'd seen a snake swimming in the river yesterday and I asked them whether the snake swam with its head up out of the water. They said it was flat on the surface of the water. It bothers me that if Penny saw a snake in the water she might think it was a stick and swim towards it.

But it wasn't likely there'd be any snakes around where we swam today, at a delightful little sandy beach, because of the... 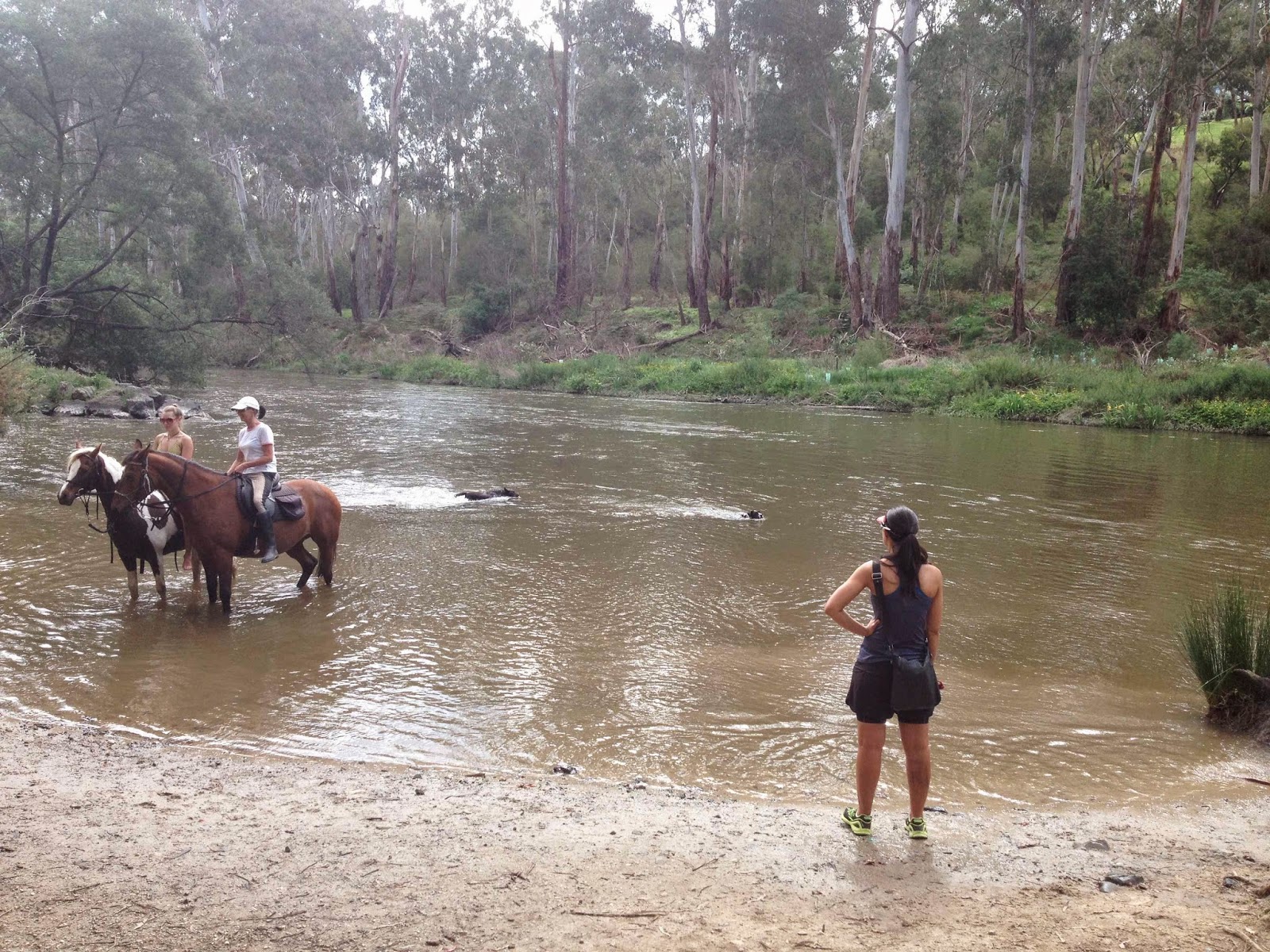 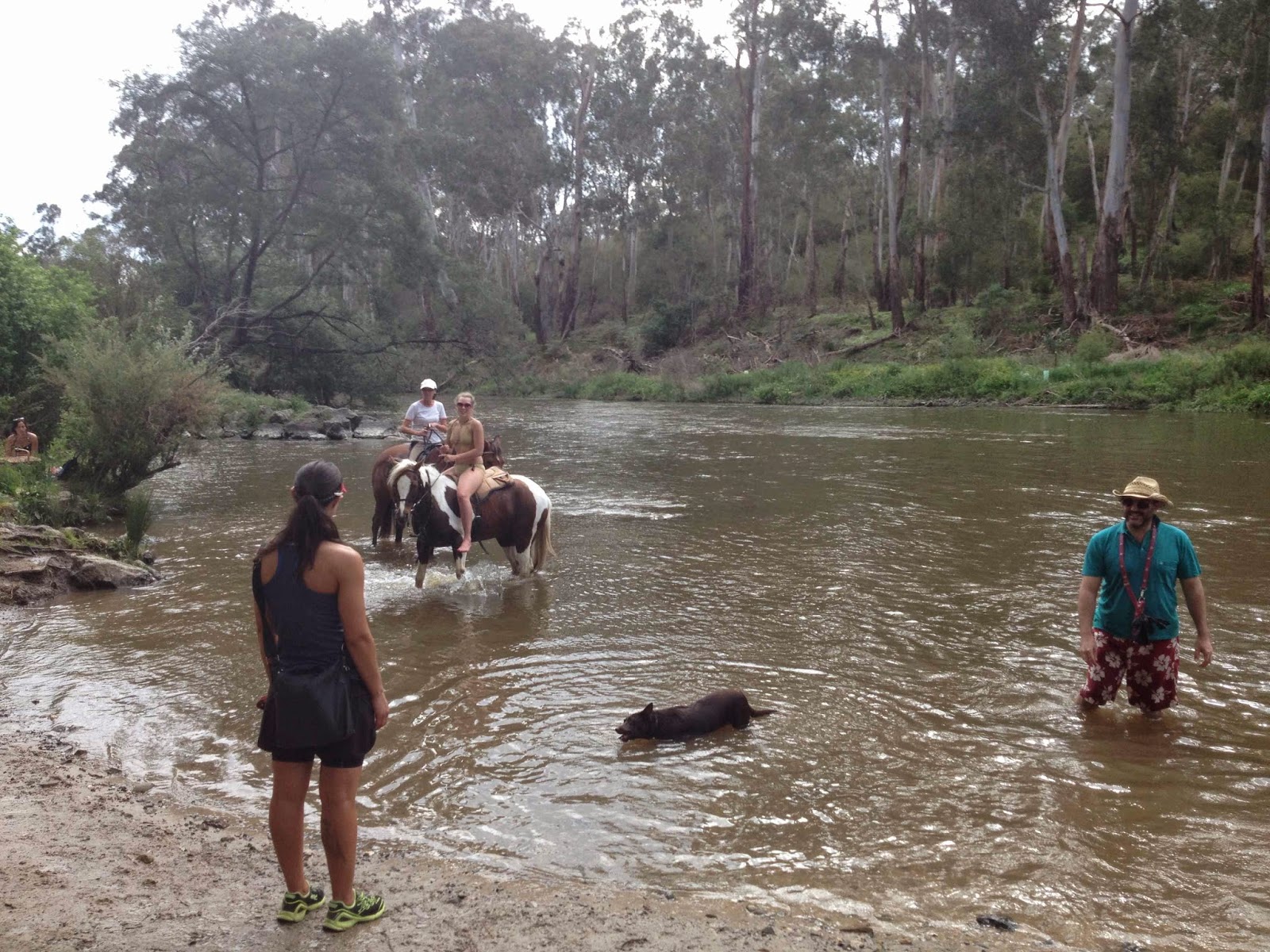 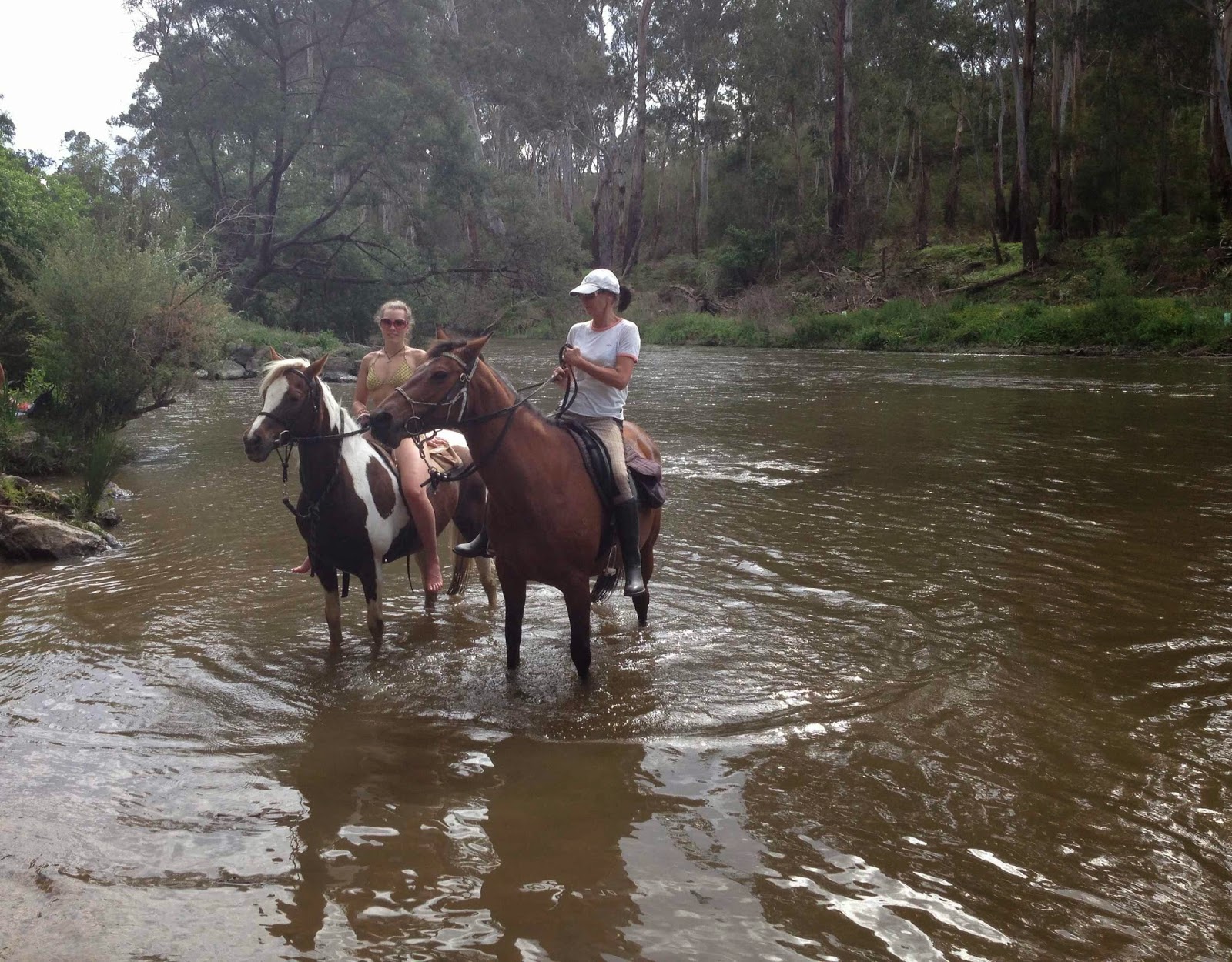 Penny didn't even see them the first time she dashed into the water to collect the stick I threw.

It was only when she was shaking out her wet fur that she decided it might be a good idea to stay well back from these enormous dogs. (She hasn't been near horses before.) 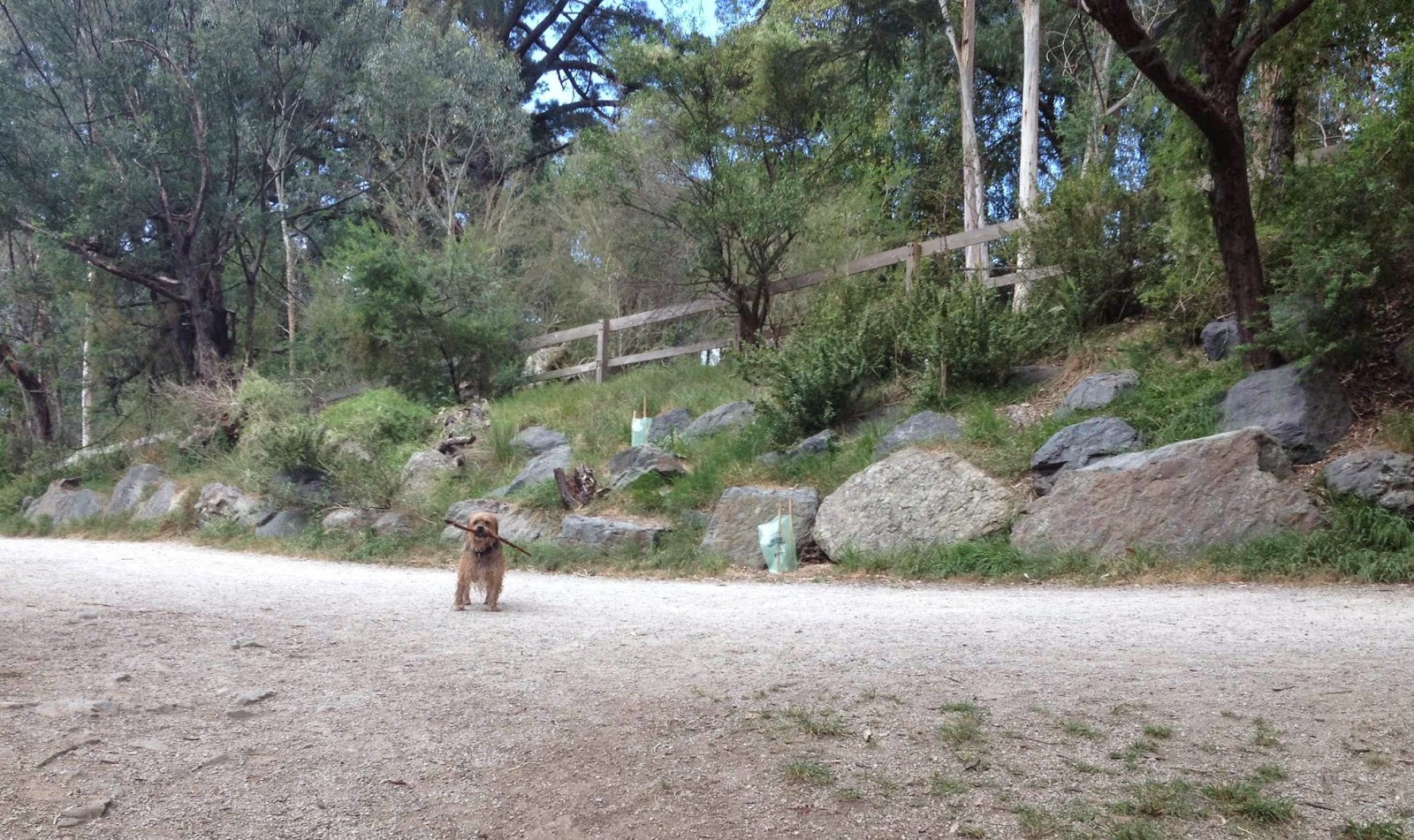 Once I threw her stick back into the water she was off again, not in the least bothered by the horses.

Or the inquisitive ducks... 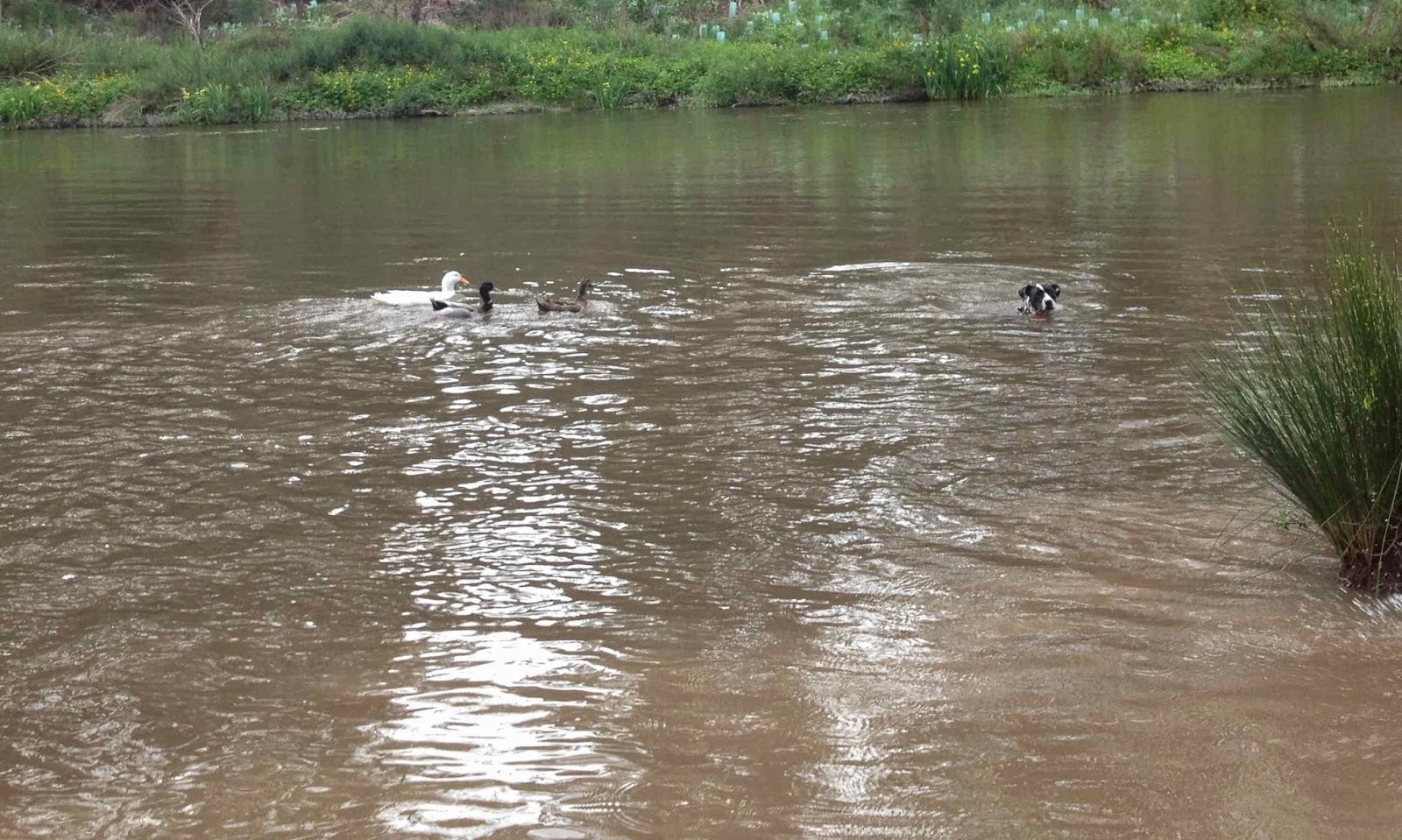 I love the innocence of Hargreaves' books, and during my teaching years, enjoyed many of his stories with children.

The new book's called Little Miss Hug and Penny the Dog, but of course it's not written by Hargreaves, who died in 1988. What a fabulous name for a dog, lol.

The profits from this book go to the RSPCA.

I came across the reference to the book in a sad way, because I visited the RSPCA site in order to get information for my letter to the Minister of Agriculture protesting about the abominable cruelty of selling live sheep to countries where they die in horrifying ways. Australia needs to stop sending live animals overseas!
Posted by parlance at 10:05 2 comments: 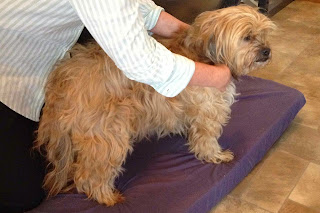 Penny dashed inside when we arrived at the little cottage in the hills, ready for another session of Bowen therapy. It was fascinating to see her shift around during the session, presenting different parts of her body to Deb, as if saying, 'Here. Just here,' like Han Solo said, touching his face right near his mouth, when he wanted Princess Leia to kiss it better.

I've searched the Net, but I can't find the clip of that bit. What a pity. But maybe it gives me an excuse to look at the original Star Wars trilogy   yet again.


Deb doesn't kiss it better. She 'bowens' it better. And she provides great room service, lol.

Here she is bringing fresh water for Penny. (It's important for the dogs to drink when they're having Bowen treatment. 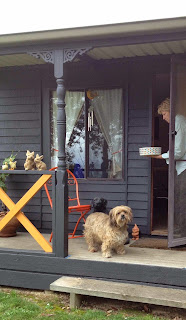 We're keeping an eye on Penny's lipoma. The vet was unable to remove it, because it's so close to important parts of her throat, so we have to check it each month. He told us not to feel it too frequently, because we might become accustomed to it and not notice it changing in size.

It's hard to resist checking it all the time, but so far we've been strong with ourselves and only felt it yesterday, because we've decided the first day of the month might be an auspicious day to do this monthly task. It's about as big as a marble.

We have to look out for a swelling on Penny's neck, which might mean the lipoma is blocking a gland. Or if we notice she cannot turn her head comfortably, that would be a signal to do something about it. Or if we notice her coughing a lot.

All this is a worry, of course, but the vet is advising a wait-and-see plan.

Because I like to be prepared, I've been reading up on lipomas, and discovered they are very common in older dogs, especially females. On most of the sites I visited, vets said they would not remove a lipoma for cosmetic reasons. They are only removed if they are causing problems for the dog. Here's an article that I thought was good.


So, if we have to do something, I've looked at a few suggestions:
1. Help her lose weight, because lipomas are made of fat.

2. Liposuction might work, and I've seen a few technical articles about this, but I think they're mainly dealing with huge lipomas on accessible places. And I don't see references to many in Australia using this technique.

Quoting from the article mentioned above:


Liposuction, the same procedure that vacuums fat out of humans in cosmetic surgery, is in many cases less invasive, less painful, and faster healing than surgical removal.
In 2006, a 12-year-old Kelpie-cross named Patch made headlines in Sydney, Australia, for being the first Australian dog to undergo liposuction. Patch had several lipomas, one of which, on his hind leg, threatened to cripple him within months. Remembering a European veterinarian who performed liposuction on a dog using the suction tool normally used to clean up fluids during surgery, an Australian vet suggested trying this approach on Patch. The hour-long procedure removed six fatty tumors weighing two kilograms (4.4 pounds, or 10 percent of Patch’s body weight). He was soon happy and playful again.
In January 2007, the Journal of Small Animal Practice reported the liposuction removal of three giant lipomas from a dog in Leipzig, Germany. The extremely obese patient suffered from arthritis and hind-leg lameness, plus irritation caused by an armpit lipoma. Previous treatment involving dietary weight loss and non-steroidal anti-inflammatory drugs had failed. Liposuction of the three lipomas resulted in a three-kilogram weight loss (6.6 pounds, or 10 percent of the dog’s body weight).
In a retrospective study published in July 2011, the Journal of Small Animal Practice reviewed the use of liposection on multiple lipomas from 20 dogs. The treatment successfully removed 73 of 76 lipomas (96 percent). Simple, encapsulated lipomas measuring less than 6 inches in diameter were the easiest to remove and resulted in minimal risk of complication. Giant lipomas contained fibrous material that interfered with the removal of fat and had a high risk of bruising, hematoma, and seroma (fluid-filled swelling), especially in the groin area. Regrowth occurred nine months to three years later in 28 percent of the lipomas. Liposuction is not recommended for infiltrative lipomas.


I was interested to come across the abstract of the above-menioned veterinary article on liposuction in dogs:


To review the success rates for liposuction of lipomas in dogs, report early complications and medium-term outcomes and formulate recommendations on the most appropriate candidates for liposuction.
METHODS:
Retrospective study of 20 dogs with 76 lipomas diagnosed by cytology, in which dry liposuction was attempted. Case records were reviewed for number and size of the lipomas, efficacy of liposuction, frequency and types of complication and likelihood of recurrence.
RESULTS:
Liposuction was successful in removing 73 of 76 lipomas (96%). Simple, encapsulated lipomas less than 15 cm in diameter were most easily removed, with minimal risk of complication. Giant lipomas contained fibrous trabeculae that hindered liposuction and resulted in poor fat retrieval. Giant lipomas were also associated with a high risk of bruising, haematoma and seroma, especially when inguinal in location. Regrowth was noted at follow-up between 9 and 36 months in 28% of lipomas.

CLINICAL SIGNIFICANCE: Liposuction may be less invasive and more attractive to owners than conventional surgery for lipomas up to 15 cm in diameter. Liposuction is not recommended for infiltrative or giant inguinal lipomas. Regrowth can be expected in a high proportion of lipomas, which should be considered when choosing liposuction over conventional excision.


The newest lipoma treatment for dogs and humans is the injection of collagenase, an enzyme that breaks the peptide bonds in collagen, the fibrous protein that connects body tissues. Developed by BioSpecifics Technologies Corporation and marketed as XIAFLEX® in the U.S. and XIAPEX® in Europe and Eurasia, collagenase is being tested in clinical trials.
One preliminary trial tested three healthy dogs with multiple subcutaneous lipomas that were benign, superficial, and easily measurable. One lipoma on each dog was injected with collagenase and another was left untreated for use as a control. Ninety days after injection, a CT scan showed that the treated lipomas on two of the dogs had disappeared completely and the third dog’s treated lipoma was only 7 percent of its original size. By contrast, the control lipomas had grown. Altogether, the treated lipomas showed a 97-percent reduction in size while the untreated controls increased by 23 percent.
BioSpecifics has initiated a placebo-controlled, single-injection randomized Phase II clinical trial to evaluate the efficacy of XIAFLEX for treatment of benign subcutaneous lipomas in 32 canines in a study to be completed in 2013. This will be followed by a Phase III clinical trial before the product becomes commercially available.


However,  the warnings about side-effects seem scary. There's a forum for discussion of its potential use in dogs on their website, but only two people have entered comments.

There are different types of lipomas (quoting from the same article I found helpful):


Most lipomas are subcutaneous (occurring just beneath the skin's surface) and are moveable, not attached to skin or underlying muscle or tissue. They are usually small and either round or oval, the size of a marble or marshmallow, and soft or rubbery to the touch. A few feel more solid due to fibrous tissue or inflammation. Some grow to golf-ball size, and very large lipomas can resemble baseballs. A few grow long and wide.


Some lipomas grow so rapidly that they might be something else, such as a liposarcoma. This rare, malignant fatty tumor usually does not metastasize (spread to other parts of the body) although it can be aggressive and fast-growing.