making paths when walking with the dog

I've mentioned previously that the local council in Clifton Hill has closed off the pathway people have worn in the grass as they head out of Quarries Park. 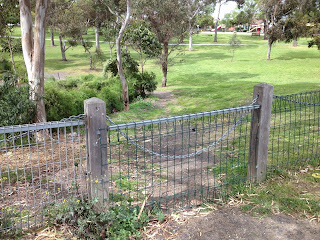 I discovered recently that these unofficial pathways worn by human feel are called desire paths.

When we headed into that park on Monday, I noticed that people must be hopping over the little chain and wearing a new desire path. Of course, once we noticed that, we had to try it our to see if it's a good idea, and Human Number Two demonstrated. 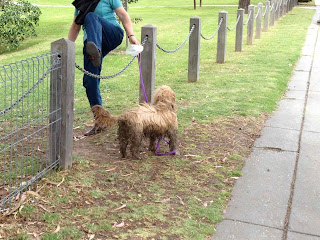 But who would have guessed we have such a law-abiding dog that she would refuse to take such an illegal action? 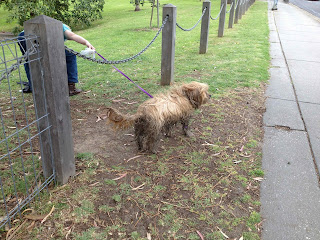 Way to go Penny! That's right, us dogs got to obey those human laws at all times. I hope you find another park you can visit that doesn't have a fence in front of the pathway.

Lassie and Benjie, that's what your job is - to teach us humans to obey the law!