When Penny died, it took me four months to even think of continuing this blog, and for a while I just added the occasional post to keep it alive. And to keep Penny alive on the internet. (She's alive forever in our hearts.)

And then we made the enormous decision to bring another dog into our household. During the worst of the lockdowns here in Victoria in Australia, many people discovered the joy a dog can bring, so we had difficulty getting an older rescue dog. Given my age (not too young is what I'll say), it was a momentous decision to start over with a puppy.

But what joy she has brought us.

And what a further education in living with a dog. I thought I knew so much about dogs, after fifteen years with one. Now I realise each dog is a new experience. Getting a lhasa apso puppy was a tribute to the fact that we thought Penny had been a lhasa.

Lhasas have special coats. Just because Penny looked like a lhasa does not mean she was one. The groomer warned us. 'Don't think this will be like caring for Penny. She didn't have a thick coat. It was fine and easily managed.'

Yep. She was so right. Peppa's coat is a whole new ballgame.

Recently she had an operation on her right front paw to remove a grass seed buried inside it.

While the weather was good, sunny and dry, we coped. But once the winter rains set in, we didn't go so well. It eventually turned out that the bandaged foot had healed well, but had got wet under the bandage and needed more time to recover. So, the cone went back on. 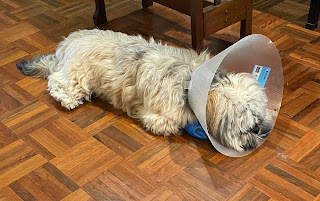 If you've seen the movie 'Up', you'll know it as the Cone of Shame. From now on, I'm going to call it the Cone of Messy Fur.

That darned cone made such a mess of Peppa's head and neck fur. 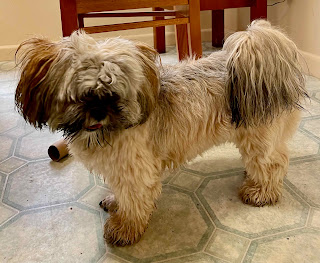 Here are the ears, the worst affected: 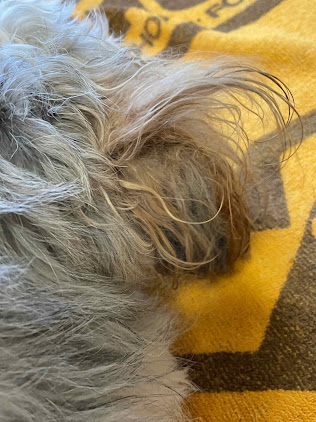 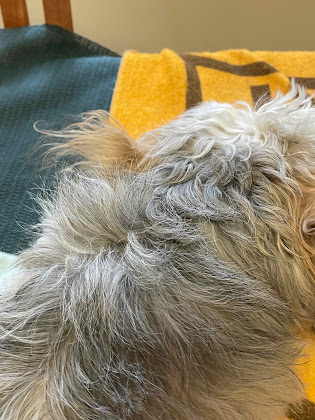 In all the kerfuffle over the paw, we've missed out on our scheduled grooming session, and our lovely groomer is going on holidays, so I bit the bullet and decided I'd have to start getting her coat back in order.

I'm rather pleased with the work I did on her ears. The first one 'only' took thirty minutes. 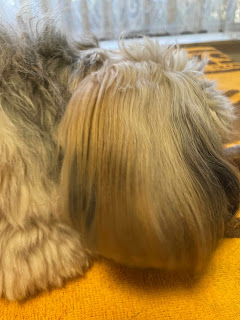 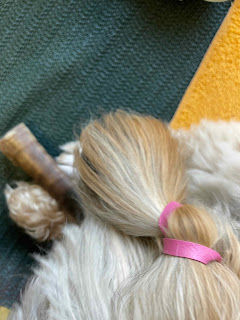 And then I started on the other ear - the left. 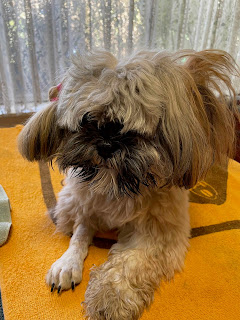 Another thirty minutes - after which it was time for a rest, each of us in her own way. Peppa in her crate, me on the computer. 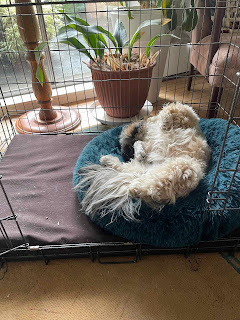 I figure in another hundred hours we should have the whole coat looking good.

She's going to be a high maintenance baby, isn't she. And sometimes that's just what we need in our lives. My neighbor here talks about her Scottie having two coat, one is wirey and he goes to the groomer twice a month!

Wow, twice a month. That's a challenge financially. But worth it, I'll guess.

Grooming gets harder as we get older but your mom will have you looking perfect in no time, Peppa! You are such a cute girl!

Molly always looks great, a tribute to your care.