On 6th November, about 11 am, in preparation for our holiday at Best Friend Retreat, I put Advantix parasiticide on Penny's back, to protect her from possible paralysis ticks.  I'd done the same thing last time we went there, because by all reports, paralysis ticks are a problem not too far away from where we were to stay.

Penny seemed agitated by the middle of the afternoon. She would hurry from place to place, paws clicking on the parquetry,  and plonk down in a curled-up huddle. We thought she seemed more settled later, but by midnight she was scratching herself.

The next day she was licking her usual itchy places, around her vulva and anus.

On the 8th, she was still agitated and trying to scratch the place between her shoulder blades where we had used the spot-on Advantix. So I rang Bayer.

I was pleased with the response from the vet consultant who spoke to me. She queried me closely about Penny's behaviour, and said eventually that Penny was having a reaction - called paresthesia  - to the permethrin in the product. I should use soapy water to wash the medication off Penny. She particularly said to use cool water, as we didn't want to make Penny more uncomfortable. She offered to take back the two unused Advantix doses from the packet, and send me a flea collar in return, plus Advantage For Dogs.

Since then, I have read that the underlying reason for washing off the medication in cool water is that if I had used warm water, it would have opened up Penny's pores and made the poisoning worse. (I call it poisoning, not just 'reaction'.)

I had researched paralysis ticks, because they frighten me. However, now that I knew we were going on holiday with no protection, my researching became more urgent. It seems strange that paralysis ticks kill dogs and cats, because it is never in the interest of a parasite to kill its host. I discovered that these native Australian ticks don't kill their traditional hosts, Australian animals. Unfortunately, they can be fatal for our non-native pets.

At Dogzonline I found people discussing the pros and cons of medications. They mentioned paresthesia. At Yahoo Answers I found a discussion of this reaction in dogs.

It all sounded rather scary, so I decided to look again at the prevalence of paralysis ticks in the area we were visiting. I called the resort and was told they had never had a case of paralysis ticks there. I rang the local vet who said they had only ever had one case, and that was a dog who picked up a tick elsewhere.

So, we went without tick prevention, although I did make sure to watch this video clip on how to remove a tick.

No way was I going to put a tick collar on Penny, given that she would be sleeping on my bed and staying in the room with me. The chemicals in a tick collar sounded almost as bad as the permethrin in Advantix.

I also checked the map showing the distribution of paralysis ticks in Australia.

Virbac has an interesting site where they map data about outbreaks.

PetMD, which I consider one of the best sources of balanced discussions of pet health issues, had an article about the hype that surrounds ticks and fleas. An interesting read!

And now that we've been back for more than a week, I think I can safely say Penny did not encounter a tick! Hooray!

Although I believe we need to be super careful in deciding whether to use these dangerous chemicals on our pets, I have no complaints about Bayer. The representative I spoke to was informative and helpful, and rang back a week later to see how Penny was. For your interest, here is the letter I received from the company:

Thank you for contacting us about your experience with Advantix. I'm sorry about the reaction your dog Penny had to this product. It does seem likely they have a sensitivity to the pyrethroid, Permethrin, used in Advantix.
As described on the phone, this reaction is called paresthesia, which is a sensation of tingling, itching or numbness of the skin following dermal exposure to pyrethroids. It occurs as a result of a direct effect of the pyrethroid on sensory nerve endings in the skin. This type of reaction is very rare and usually resolves spontaneously in 24-72 hours.
To warn pets owners of this possible reaction, the following information is included on the label insert:
"On rare occasions reactions on dogs may include skin sensitivity resulting in symptoms such as scratching, agitation or lethargy. These signs are normally transient."
As discussed, it is likely that your dog will continue to react in this way, so it is best to not use Advantix or any permethrin-containing products in the future.


One other thing I might mention to anyone who reads this and wants to know more about permethrin: it's interesting to look up the difference between pyrethrum, a natural product, and pyrethroids. I've come to the conclusion that pyrethroids are very dangerous. We have an organic garden and try for a chemical-free household.

It's quite a dilemma what to do about protection for Penny from parasites. I do believe Australians probably over-medicate our dogs in comparison to the rest of the world.
Posted by parlance at 22:43 6 comments:

where did dogs originate?

Slavenka has posted a link to a report on a study that looks at the possibility that dogs originated in Europe, not other parts of the world, as previously thought.
Posted by parlance at 20:19 No comments:

Once again I've buried some Bokashi compost in our back yard, which means it's in the part of the garden accessible to Penny.

So I've covered up the spots where the delicious-smelling muck is hidden.

I don't think Penny could get to this lot, under heavy pavers. 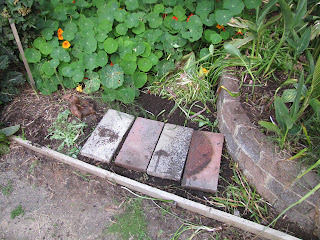 But I'm not so sure about this spot, where it's under a piece of timber. So I threw down a collection of sticks to make it harder for her. 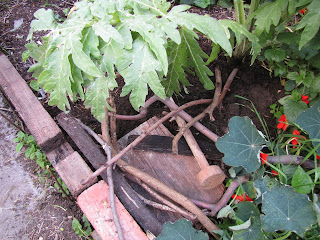 Now, this one, under a flimsy piece of timber, looked a bit vulnerable… 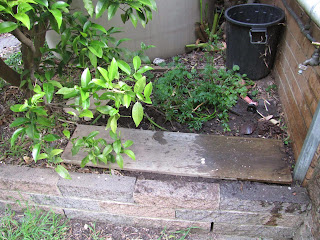 so I added a couple of heavy pieces of brick and a big pot. 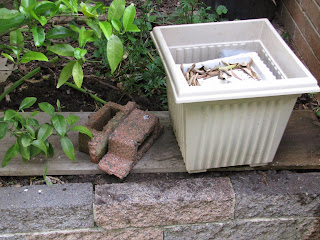 Here's hoping for the best. Luckily, we're off to Best Friend Retreat for a couple of days this week, so maybe the smell will have faded by the time we're back.
Posted by parlance at 22:30 5 comments:

a giant outline of a bird in the grass

Finally I've discovered which artist created the great outline on the hillside in Quarries Park in Clifton Hill. How could we have walked across this artwork for so many years and not have noticed this plaque in the grass? 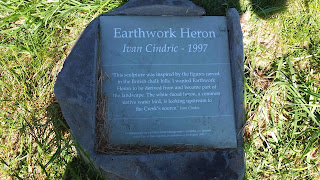 Ivan Cindric. I haven't been able to find anything about him on the Net, except this letter about the sculpture.

In the letter there's mention of vandalism of the plaque and the intention to replace it, so perhaps it has just been placed where we came across it. I hope it's not vandalised again. 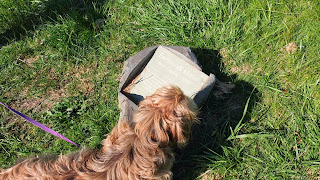 Well, it's actually Penny trying to snaffle the piece of dried chicken I tossed onto the gound near the plaque.

a great dog book to buy

For many years I followed the beautifully written blog of Jean Riva, which focused on life with Cooper, a miniature poodle. Jean's husband, Don, was incapacitated by a stroke and through the story of Cooper I had an insight into what life was like for Don and Jean.

I loved this blog!

Sadly, life changed for the household, and Levi, a miniature schnauzer, came to live with Jean.

I won't say much more. I'll leave it to you to have a look at the first fifteen pages of the book and decide whether to buy it.

I'm sure it will be a great read. Jean and Cooper - who writes from across The Rainbow Bridge - are terrific writers.
Posted by parlance at 18:11 2 comments:

whatever happened to Lucky the famous seafaring dog?

It's almost exactly three years ago since I posted about the book Lucky Goes to Sea, by Frank Robson. I loved this book, because it was centred on the dog and the love his humans had for him.

I remember quoting a sentence near the end of the story:
He's our once-in-a-lifetime dog, and even if he lives to be twenty (not that unusual among small breeds) it won't be enough.

I'm sad to hear that Lucky did not live long after the book was written.

I've just read this news in a letter written by Frank Robson to the editor of The Big Issue. He says, in part,

Sadly, not long after the cruising adventure outlined in the book ended and we came ashore, Lucky - then about 13 - succumbed to cancer. We tried going for a few short sails without him, but it just wasn't the same…so we sold the old trimaran and settled (for the time being) in Brisbane…it is a wonderful thing to adopt a dog and show him or her a good time, especially when their happiness lights up your world as Lucky's did.

The Big Issue is my favourite magazine.

I think Lucky looked a lot like Penny. I asked her to pose with the two books, Lucky for Me, and Lucky Goes to Sea, but Penny doesn't like the camera pointing at her (as you can see by her nervous lip licking). 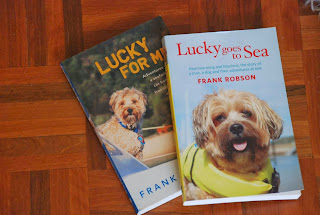 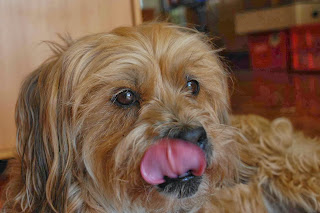 Penny's not really into reading books... 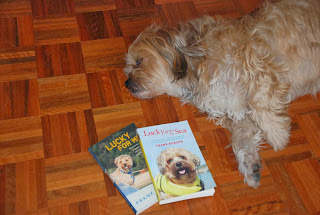