Slavenka has posted a link to a lovely photo of dogs in Rome jumping into the Tiber in a beach that is just for dogs!

Wow! Lucky dogs!
Posted by parlance at 20:07 8 comments: Links to this post

The other night we had another try at broadening Penny's raw feeding diet to include fish.

What was this weird stuff her bowl? Hmm...she carried it over to her eating mat to examine it.

And then the human tried to convince her it was fun...it would be a good reward for obedience...it was worth guarding from food-thieves.

In desperation, determined not to waste it, the human popped it into a saucepan with some hot water, lightly cooked it, and, hey presto! It must have tasted good.

woman with dog refuses to be airlifted from the bushfire

There's an article today in TheAge newspaper that has me wondering what I would have done if an inferno of flames was approaching my property, I was being airlifted out with my dog in my arms, and the dog jumped back down to the ground.

In Kinglake West, during the tragic February bushfires, Juliet Moore was attached to a police helicopter's winch, when her dog, Poncho, jumped out of her arms. Ms Moore asked to be released from the winch.

Eventually the police helicopter had to leave when it became unstable because of low oxygen levels in the air, and the police officer who was on the ground took a convoy of cars to try to reach safety. Ms Moore had a passenger in her car, and the passenger leaned out the window and led a horse by the halter.

The next car towed a horse float with two horses.

And the convoy was joined for part of the way by deer, koalas, kangaroos and lizards, all running alongside the cars.

When I read this story, I hoped and prayed I'll never be in this terrifying situation. It made me think about the fact that we are just one species of the many that share this one planet, but we are in a better position to influence what happens to our climate and our environment.

It's a big responsibility.
Posted by parlance at 09:24 5 comments: Links to this post

Penny took the mud treatment in Darebin Parklands today and I suppose her skin must be soft and lovely.
Of course, we don't really want to get close enough to check, because...she smells.

First she approached the treatment parlour. 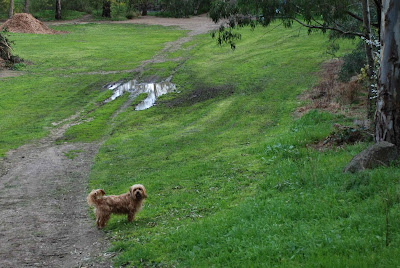 Then she coated herself. 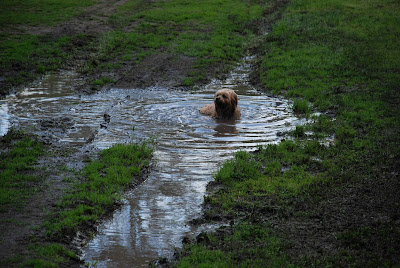 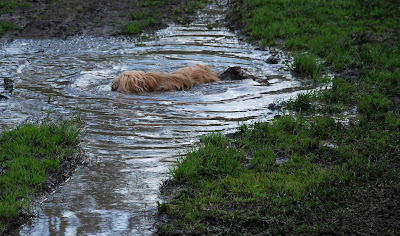 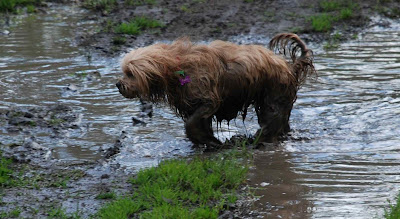 Then she took a grass massage. 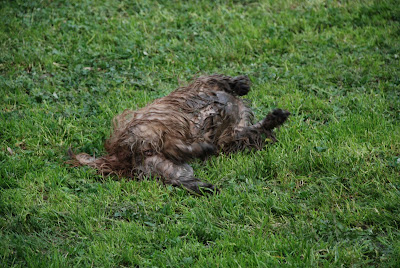 Next, a hair treatment - just a hint of colour around the ears. 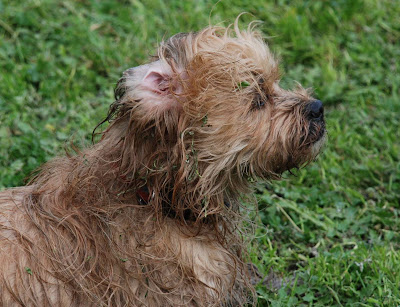 Followed by a quick dip in the filthy creek to smooth the treatment into her skin. 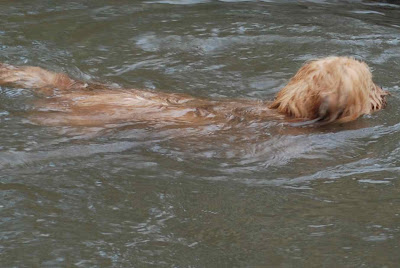 Posted by parlance at 19:00 4 comments: Links to this post

a dog teaches her human to meditate

JD and Max commented recently that dogs teach us to be in the moment. I totally agree. But sometimes I get so tied up in my own thoughts that I forget to listen to Penny's wisdom.

So today we went for a walk in windy Darebin Parklands to look for an object from nature that could serve as a focus for a meditation session. Penny was on the lookout for all sorts of things, but I didn't feel all that much drawn to contemplating rabbit poo, dog poo, wet muddy puddles or strands of tasty grass.

We met the ranger, Peter, and he told us to stay in the open today, because the Parklands were taking the brunt of the brutal winds we've had over the last few days, and trees were dropping branches.

However, we were still surprised to come across a whole tree that had keeled over. Only the other day we had looked at its beautiful dead symmetry against the sky, but today it lay shattered into pieces on the grass. 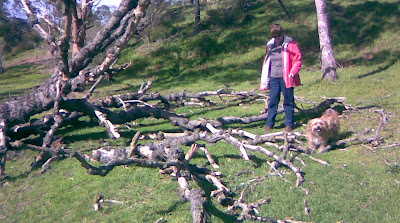 During the walk we did find some bits of bark, a dead stick and a pine cone that were beautiful, so I brought them home. 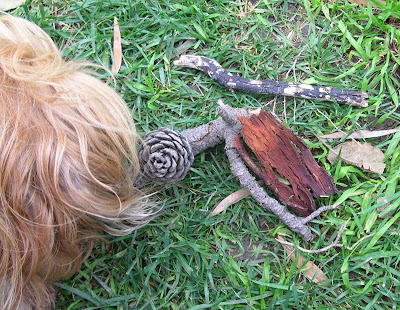 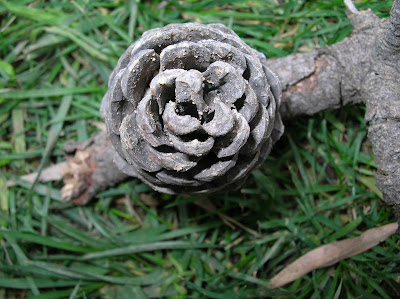 Posted by parlance at 14:43 No comments: Links to this post

an old dog learns to be happy

Scruffy, who visited us for the first time on 14th July, after he lost his best canine friend, came again today. His human loves to see him happy, but said to me, 'You can't teach an old dog new tricks." Well, that was an immediate challenge, and I said I could teach him to 'sit' within one minute.

Here he is after a couple of minutes. (He's the fluffy white dog.)

The lovely little even older dog is Bonnie, our regular visitor.
Posted by parlance at 15:56 7 comments: Links to this post

the snakes are out already

I know, I know. Snakes were here first. Snakes have a right to live. Snakes are protected by law.

But I still don't like walking where there are deadly snakes. And one of the local papers has an article this week saying the first snakes have been seen sunning themselves near here. Two sightings have reported them out along the Merri Creek.

Whatever happened to the old days when we had a proper winter?
Posted by parlance at 17:48 4 comments: Links to this post

Penny did well at her first ever flyball event, last Saturday. She's keen to chase a tennis ball (too keen, in some situations!), she loves grabbing a tug toy and she flies over jumps with great enthusiasm. So I guess the main issue for us will be whether her human can learn to play her part, and also to make sure Penny plays this new sport safely.

At our first session we learned that it's most important to conquer the turning technique before participating, so she can turn efficiently without any strain on her joints.

Here we are practising at home. Of course, as soon as I left the venue I forgot nearly everything the teacher had told us, so maybe our technique isn't too good.

But I think we got the basics right.

Posted by parlance at 18:20 4 comments: Links to this post 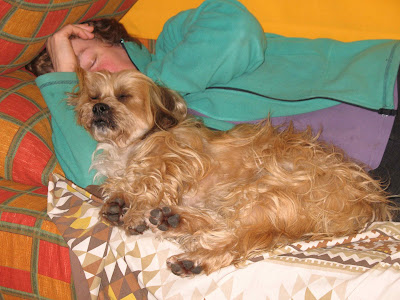 Sometimes the picture tells the story.
Posted by parlance at 21:07 15 comments: Links to this post

choosing names for our dogs

I've noticed many dogs around here with names that end in an 'ee' sound - Penny, of course, and Lucy, Darcy, Lucky - it seems to be a trend. I've wondered whether it's because, here in Australia, we tend to use that sound as the diminutive of a word. For instance, we say footy for football, barbie for barbecue, prezzie for present, and so on. Maybe the doggie (there I go!) names are a way of treating our dogs as pets, as familiar and comfortable animals to have around.

But I've just read that the most popular name (at least in the US) is Max - and that's a name I've heard around here. An article on Dog Blog reports the current trend in the US and the UK for giving dogs human-sounding names, as a recognition that they are part of the family. The article says

“Most people nowadays believe their animals feel and think — that, like us, they are conscious beings. That’s a far cry from olden days when dogs and cats had to sleep in the barn,” says anthropologist Mary Thurston, who has studied pets’ influence on the human psyche.

“It’s only logical that we would give them names traditionally reserved for humans, reflecting this new status as family members.”

A Toronto-based blogger, Michael Murray, is quoted as saying traditional dog names such as Fido or Spot "strip the animal of character." (I can't find a link to this blogger anywhere on the Net, so I can't link to him.)

I don't really agree with this opinion, as it's not only dogs that are named by characteristics such as loyalty (Fido) or visible characteristics, such as spots. What about the typical Australian habit of calling a redhead Bluey - or the naming of human babies to reflect a wish for the newborn child?

I don't know how many children grow into their names, but perhaps it's time we took more care in choosing for puppies.

We named Penny because she was a copper-colored puppy. It seems we might have considered more deeply, because her name means weaver, duck.

And she sure does like ducks. To look at, you understand - not to chase.
Posted by parlance at 20:52 13 comments: Links to this post

Penny and the little fishies in her food

Penny won't eat much fish, as I've mentioned previously, although we try to get her used to it. The other day I sneaked some whitebait into her bowl, mixing them in with a raw egg - which she loves.

It looked as if the experiment was a success. She worked busily at her bowl, making sounds that seemed to indicate enjoyment. And then, when she looked up for a rest...there they were, a nice collection of little fishies, carefully licked clean of the egg.


Maybe she should have been introduced to fish early in life, like these little cane corso puppies, only five weeks old and dealing with their first big Indian mackerel.

Posted by parlance at 20:40 4 comments: Links to this post