We returned to talk to the specialist veterinary surgeon last week to discuss Penny's torn cruciate ligament in her right knee and he believes nature is healing the problem without any necessity for surgical intervention. It's inevitable that Penny will get arthritis, sadly, but the surgery might result in worse arthritis than a natural healing.

We were so excited that we treated ourselves to a little picnic in a park near the vet hospital. Penny had been fasting, in anticipation of an operation, so we bought her some supermarket dogfood, which
we don't usually do. She loved it. And a cake and a hot drink each for the relieved humans. 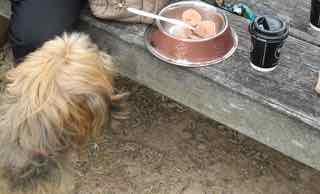 We'll go back to see the surgeon in two weeks' time to discuss it again. In the meantime we're taking her on short walks where she is encouraged to step out in a steady manner and exercise the leg without any twisting or turning.

I've looked back at my own blog post from Sunday 18 July 2010 and see that we tried to manage her first cruciate tear conservatively. On Thursday 22 July 2010 we were still trying to manage the situation with rest, and I was busy researching alternatives.

On Wednesday 8 September 2010 we opted for a traditional cruciate repair and began the slow process of her recovery.

What I didn't realise at that time was that when a traditional repair of the knee is performed, the nylon suture eventually breaks down and it's the build up of scar tissue that keeps the knee stable.

I've just been looking at Vet Surgery Central's diagrams of the extracapsular repair and it helps me understand what the surgeon has told us about Penny. It says:


Heavy suture material (monofilament nylon) is passed from the lateral labella to the tibial crest and tied in order to eliminate joint instability (drawer movement).
With time, scar tissue develops around the stifle joint which helps to stabilise the joint. The build up of scar tissue will also decrease the range of movement of the joint.

As I understand it, we have unintentionally practised 'conservative management' of Penny's injury by keeping her quiet for the last two months and restricting her walks to first five, then ten, and now fifteen minutes, on level surfaces and mostly on lead. We kept her so quiet because we were afraid she had cancer throughout her body. Terrifying, but since the second CT scan we are assuming that is not the case.

I'm encouraged by reading this post about a dog called Tucker who had a traditional cruciate repair on one leg and succeeded with conservative management on the second leg.

I'm particularly interested in this part of the story:


This second time around I did things a bit differently. I still kept him confined to controlled, leash walking when he needed to use the bathroom, but I also made it a point to walk a half a block or so each time we went out. My logic here was that it was important to keep the joint somewhat strong and mobile while his body was working [to] build up scar tissue and muscle around the torn ligament. I was careful to make sure that he did not get overly excited, jump and/or run, because I was sure that any strenuous activity or quick motion would tear the ligament for sure and set us back.

The blog author mentions the transition from NSAIDs to Yucca Root. I might investigate this product. They mention treatment with glucosamine and chondroitin supplements, which we give to Penny every day, and also omega oil to help with joint lubrication and reduce inflammation. We do that every day also.

Another point is to make sure there is no weight gain, and to try for weight loss if appropriate. Well, what with being on NSAIDs, which gave her diarrhoea, and getting less food because we didn't want to upset her stomach, Penny has lost some weight over this period. (Actually, we were rather scared when her weight went down to 14.6 kg/32 lb.) I must check what her weight is lately.

So, here's hoping she won't need an operation.

Penny's not worrying about it all, she's just enjoying the quiet life. 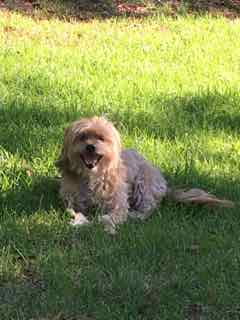 Today, after more than six weeks of anxiety, we received the welcome news that the second CT scan of Penny's body showed no changes in the 'spots' that had shown in the first CT scan four weeks ago, so the specialist vet has classified them as benign.

So now we need to keep resting Penny and give her a while to get over the anaesthetic from the last scan, and then it will be time to decide what to do about her torn cruciate ligament.

In the meantime, we are restricting walks to a gentle stroll in the evenings. We try to limit it to ten minutes, but if Penny seems happy we let it go a bit longer. Tonight we explored a new dog park near us. It was so tiny that in normal times we would have thought it unsatisfactory, but at the moment it suits us fine. 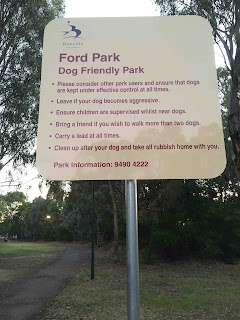 One way that Penny has been keeping herself occupied is in hunting for rats in the straw-bale vegie garden. 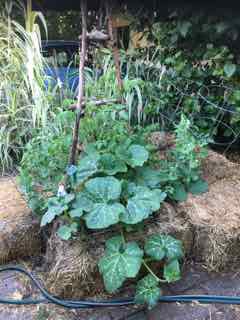 Sometimes when hunting rats you have to brush through quite a few spider webs, but that doesn't stop Penny staying on the job. 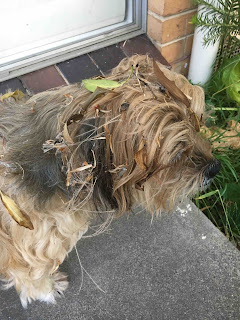