It's been complicated living with Penny lately. Not only are we dealing with intermittent lameness due to her injured cruciate ligament and consequent recovery from surgery, but she's also been very much bothered by skin irritation.

Even though we generally adhere to a raw diet, we took our vet's advice to try a totally non-allergenic diet, a Hill's food called z/d. We just hate feeding her this, but have strictly stuck to it for five weeks now. (The vet wanted us to try at least six weeks, and friends have told us that's standard for giving allergens time to get out of a dog's system.)

One of the problems has been that Penny doesn't like the food all that much. She eats it, but looks longingly at what we eat.

Also, I haven't felt like using it as rewards, as it has no great value to her. So that's been another problem with her deterioration in walking nicely on lead and generally behaving well. As Honey's human often reminds us, it's necessary to keep training right through a dog's life.

after all this time following the diet, I went to the vet to buy another bag of it last Friday, only to be told there's a supply problem and it's not available. I must say, I wasn't impressed, and went to other clinics to try to buy some. Eventually, having contacted eight clinics, I acknowledged that it didn't seem likely we could continue the therapeutic diet.

My own vet clinic had canned food, though - Hills' z/d cans. Lots of them. So I bought them, feeling as if we were sliding down the slippery slope to tooth problems and unhealthy diet.

The vet nurse told me it's possible to slice the canned food very thin and bake it in the oven, thus turning it into dry treats.

And, to top it off, the manager of our vet's other clinic had had the forethought to stock up on this food when she heard there were supply problems.

So, we're going to stick to the program for another few weeks and hope Penny's skin problems clear up.
Posted by parlance at 21:17 10 comments: Links to this post

at lillydale lake in lilydale with our dogs

Penny had a great day last Sunday with Cindy's walking group at Lillydale Lake - which, strangely, is in Lilydale.

We walked on lead for most of the time, but there was plenty of opportunity, also, to walk off lead 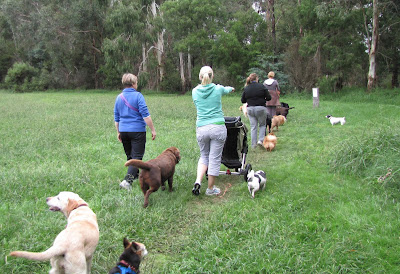 explore the water with other dogs (no, that's not Penny!) 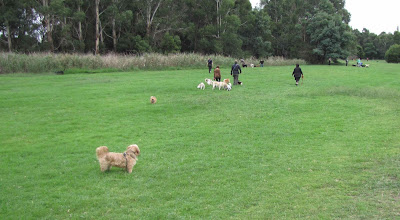 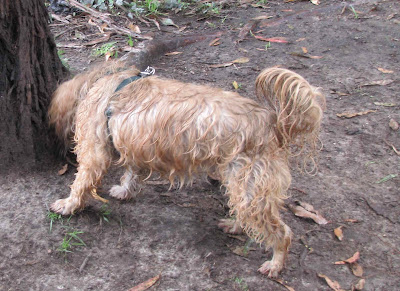 The next day she was in pain, not even putting her rear left leg to the ground! That's the one that had a cruciate operation last September.

I think the big problem is that, since her operation, training has gone out the window and she now pulls on the lead when walking with a group of dogs. The pulling puts strain on her hind legs.

Yesterday she rested, and we applied ice-packs to the knee intermittently throughout the day. Today she is walking on four legs, so it was back to slow ten-minute walks around the streets, but I'm not sure about her level of pain, so it's off to the vet first thing tomorrow morning.
Posted by parlance at 18:52 4 comments: Links to this post 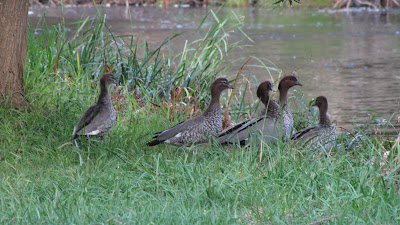 And I recalled how Penny had grazed that area, refusing to come when called - which is unusual. At the time it took me ages to realise she was eating the ducks' poo.

I met a local walking with his dog and he warned me not to let Penny eat duck poo, because it can spread botulism, and he said at all costs to avoid wombat poo because the wombats have a type of blood-borne mange that is incurable. Apart from comcern about Penny getting this mange, I feel sad if he's correct that most of the wombats around the Yarra Ranges have this mange.

I had a look on the net and came across an article that says even in wombats mange can be dealt with. Interestingly, it said that humans too are afflicted by one of the mange mites - but in humans we call it 'scabies'. It's not the same mite that affects dogs.

At any rate, Penny's night-time grass grazing worked its magic, and out came a nice greenish poo. There's no definite information around about why dogs eat grass, but this is one time when I feel sure the grass eating was because of an uncomfortable bowel.

Thank goodness she seemed fine in the morning!
Posted by parlance at 21:20 12 comments: Links to this post

in the hills with my dog

Penny is used to spending some time up in the Yarra Ranges, and mostly hangs around in the house waiting for a chance to go out on a walk or a swim. And up there, the Yarra is usually clean, unlike its muddy lower reaches at Warringal Park in Heidelberg. 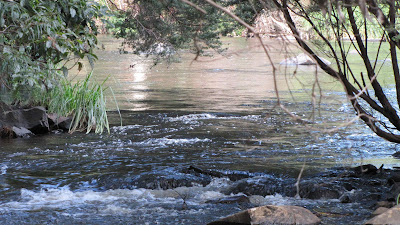 We usually cross the river at Warburton on the swinging bridge built by the Australian Army. 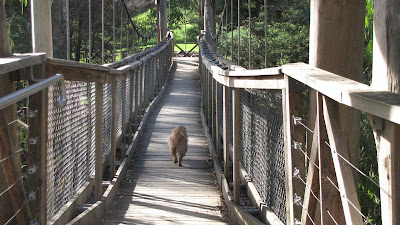 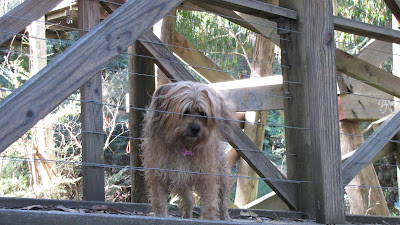 However, there is a home-grown attraction at our own place, now, because our neighbors have chooks - and they've situated the chicken run right beside our fence, just in the spot where the big branch fell from the mountain ash and crushed the top part of the fence.

Penny decided to sit and watch the chooks... 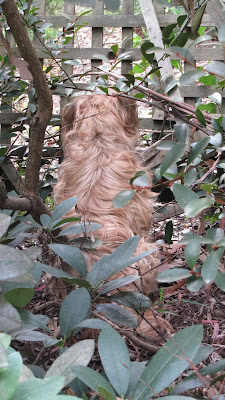 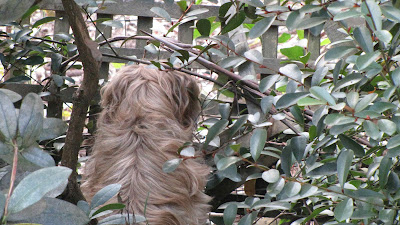 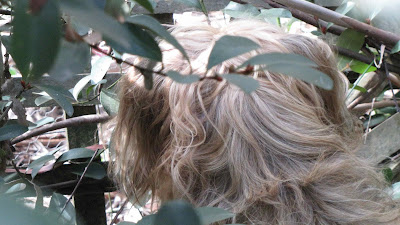 It's great to see her so calmly getting used to them, but until the fence is repaired, I won't be leaving her alone out there, that's for sure.
Posted by parlance at 11:51 4 comments: Links to this post

At Warringal Park and warnings about snakes

On an impulse, I drove Penny to Warringal Park the other day, because I wanted her to just mooch around rather than walk a distance. (She was still a little lame.) 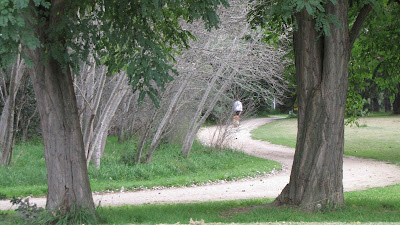 To my pleasant surprise, we were greeted immediately by an old dog-walking friend and her dog, even though we haven't been there for years. Penny and I were both pleased to see them. Sadly, I heard that five dogs have been bitten by snakes recently when they ventured near the banks of the river. As I understand it, they are all alive, but one is still fighting for her life. I hope she makes it and returns to good health.

Before I heard this scary news, Penny and I had been down to the river - the danger spot! The water was, as usual, brown - it's not for nothing The Yarra is known as 'the upside-down river' with the mud on the top. Penny swam for sticks and then enjoyed guarding them. 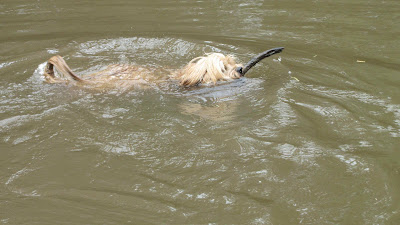 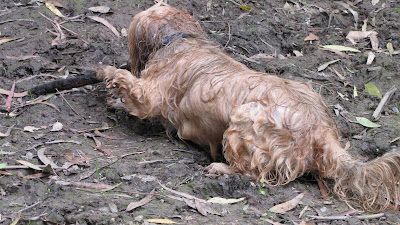 Revisiting an old haunt required a lot of sniffing, of course. 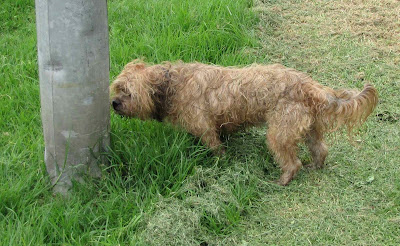 Posted by parlance at 20:55 2 comments: Links to this post

Penny has been taking it quietly lately, because she seems to be limping quite badly at times. We've been sticking to short street walks. I think I might have overdone it by taking her on a two-hour walk in the Upper Yarra Valley recently. (But she had a great time!).

We'll go to the physio next week to see how her recovery from cruciate surgery is going. And we've started doing her home therapy more regularly. I think we had become complacent, even though we have been told her leg will never be the same as it was before she injured it.

But today she spent her time rushing down the back steps to check out some intruder in the lush growth in our backyard - growth that is the happy result of all the lovely rain we've had lately.

I think we have rats in the garden once again. She stalked them (or it?) around the garden beds for ages, her slowly waving tail the usual indication that she was on the hunt. It was good to see she was using all four legs to go down the steps, but she did hop the last step on three legs.

Posted by parlance at 22:46 8 comments: Links to this post

Penny stayed home last Monday when I went for an excursion with my photography class, but the teacher's dog had the privilege of going with us. And why not, given that he's such a lovely, well-behaved canine, willing to mooch around in a relaxed fashion? 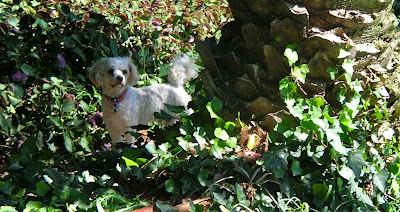 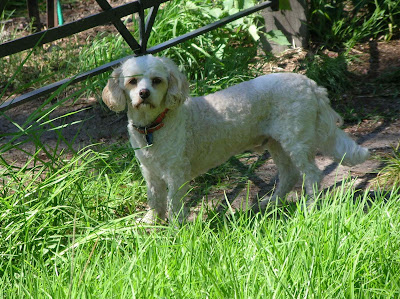 We learned how to put our cameras down low near the surface of a pond or a puddle and get a symmetrical photo of and object. I tried this rock and was happy with the result. 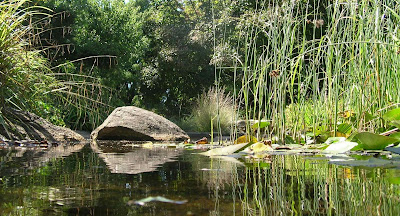 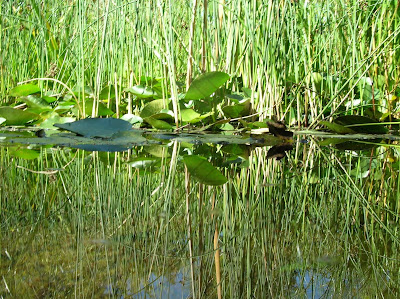 And Rocky himself was so photogenic. 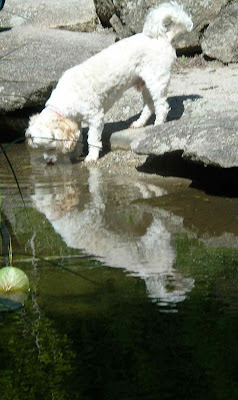 So, when Penny and I went down to the river at Yarra Bend, I tried out my new technique as she swam for her toy. 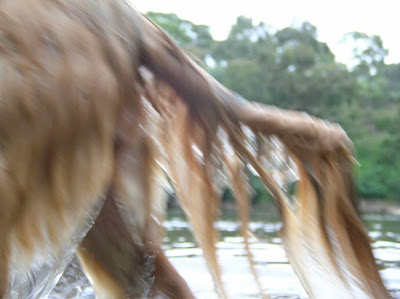 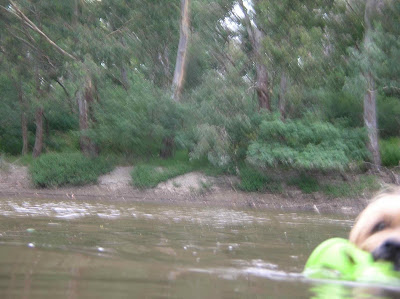 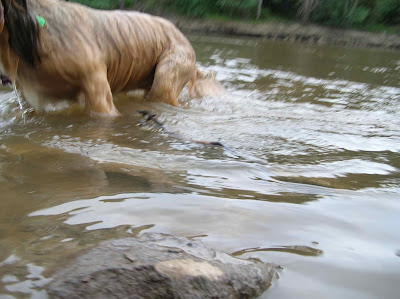 Hmm... Looks like I'll either have to learn to take photos more quickly or I'll have to slow Penny down!
Posted by parlance at 22:05 10 comments: Links to this post

dog joke from The Friday Funnies

Penny gets annoyed when dogs sniff her rear end, so I think she'd enjoy one of today's jokes from The Friday Funnies:

Q: What did one dog say to the other?

Yep, she does sit down if she notices a sniffer is approaching her from the rear.
Posted by parlance at 12:49 2 comments: Links to this post