What to feed the dog

I used to feed Penny only raw food, but nowadays we tend to mix raw and cooked. However, since her time in hospital with a bad attack of what seemed to be gastritis, we are super careful that she not get anything that might set back her recovery.

So it was helpful to get an email from the RSPCA tonight with a suggested feeding guide.

We feed her sardines, and I notice the guide says not to feed fish too often, so I'll take notice of that.
Posted by parlance at 22:15 2 comments: Links to this post

So far the new foldable pool ('buddy and belle' brand, made in China) is a great success. I had put it away, and it folded up really small, and fairly easily, though of course I couldn't' get it back into the original box. Who ever can?

It fitted comfortably into an ordinary cotton shopping bag, 42 cm square (about 17 inches). 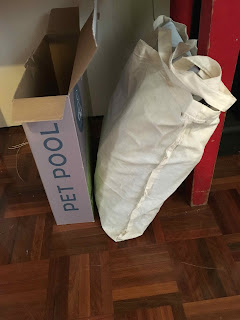 Today it's hot and the house is full of workmen replacing a damaged ceiling, so there's no cooling possible. It seemed like a good time to try the pool once again.

Penny doesn't do much jumping these days, due to a past operation on her left knee and to a degree of arthritis, but she leapt in and out today, having fun. We'll hope she doesn't pay the price tomorrow. 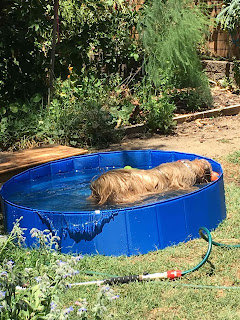 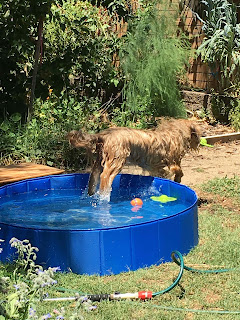 Posted by parlance at 15:45 6 comments: Links to this post

Penny has her walks at the crack of dawn these days. (Well, we try to get back home before 9 am, which is the time we have to slop some sun protection on the humans.)

Yesterday we went to Rosanna, and walked in the cool of the morning, but it was still nice to have a drink to rehydrate ourselves. I was struck by the difference between the 'landscape' around the tap, where dogs spill water (messy drinkers, all of them!) and the surrounds where the poor soil gets no water.

It's a great example of the difference sufficient water makes to the plants. 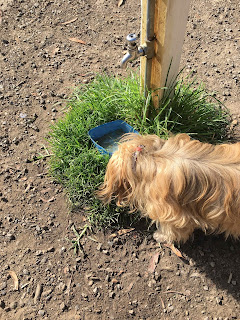 Posted by parlance at 20:15 6 comments: Links to this post

Penny was almost invisible recently, after she frolicked in a mud puddle, enjoying the rare experience of rain, and then rolled in the dry dirt where there used to be grass.

And now she's at it again, blending in to the indigenous grasses of another park. 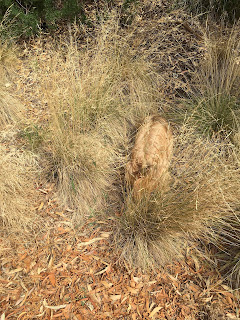 Isn't it lovely to see how the native grasses can cope with the current dry weather? Thank goodness for the people who work so hard to put in appropriate plants that can support wildlife. (Volunteers, for the most part.)

It's hard to keep non-native grassed areas alive now, with such a lack of moisture, and you can see in the next photo what a difference it makes if the area is watered. The more distant part has received water, in order that sporting events can go ahead. 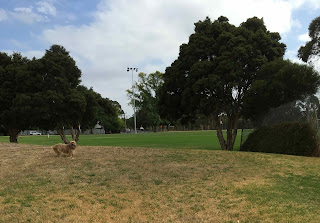 I used to be critical of the use of water on sporting grounds, until I went to a talk recently about how decisions are made when allocating our precious water resources. The speaker told us that in the awful Millennium Drought, suicide rates soared in many towns when sports grounds were allowed to go to ruin, and when consequently sports events were discontinued. The psychological value of such community events is incalculable.

I sure hope we're not creeping into another drought...
Posted by parlance at 23:01 6 comments: Links to this post