Grasses as allergens for dogs

When I was at the Diggers Botanic and Rare Plant Fair today (in the freezing rain and wind), I bought a gift for Penny. 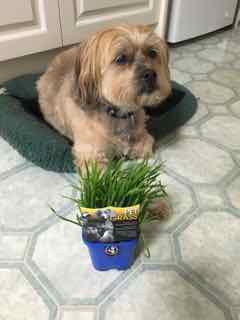 It was labelled as Pet Grass. I know Penny likes to eat grass, so I thought it was a good purchase. Here's the label:

(If the label's too hard to read in this photo, you can click on the photo and it will open in another window where it's easier to see.)

The name is: dactylis glomerata. 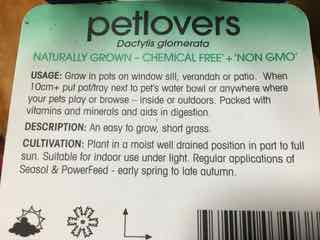 Always keen to collect information about plants, I Googled the name. And found, to my surprise, that the grass is an allergen for many dogs (and humans).

Nelco-Vet, in a brochure called Allergens and Your Pets, under the heading Orchard/Cocksfoot Grass, says:

the flowering heads are clustered in irregular, rounded shapes, coarse in texture, and resemble a thumb sticking out of the side of someone's hand. Widespread throughout the world, Orchard produces pollen that is well known for its hay fever causing properties in Europe and North America. It starts out in early spring and has tenacious re-growth after being grazed upon.

Well, that was a waste of four dollars. I thought of tossing it in the green bin for garden waste, but on second thoughts, I'll let it grow in a pot and cut the seedheads off.

Posted by parlance at 17:42 4 comments: Links to this post

Yesterday Penny went for one of her favourite walks, along the Yarra River at Warburton.

But what was this? A big mess at the entrance! 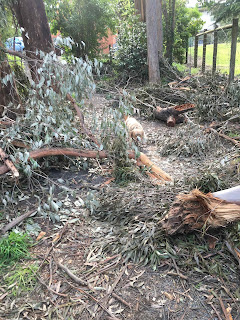 But no worries. Someone had been very busy clearing up the fallen trees after the big storm last weekend, so we could get through easily. 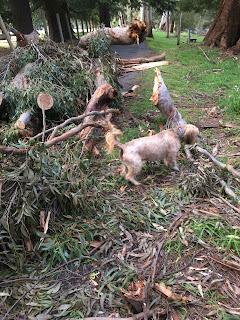 Many of the fallen trees were enormous. They must have been many decades old. 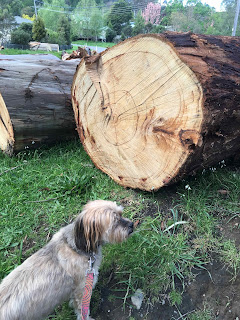 'Come away from this one,' I said to her, because it looked ready to fall the next time the wind blows. 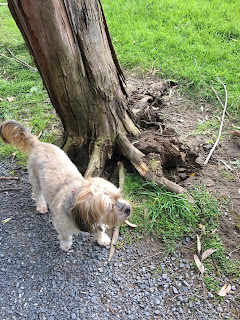 Every fallen tree we saw was a eucalypt. Here's Penny examining the roots of one of them. This one had fallen across the river. 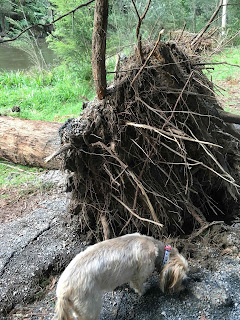 But here's something interesting... That tree was right beside a stand of Californian redwoods planted early last century. Not a one of them had fallen. (Can you see the fallen eucalypt across the path in the distance?) 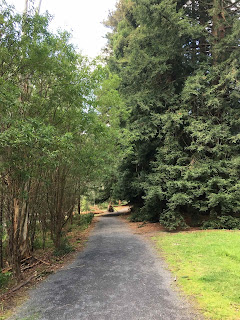 Yarra Views Blog is the only site I could find that has information about the trees beside the Yarra River in Warburton itself. The writer says these trees were planted by a group of American Seventh Day Adventists. I recall from a previous blog post of my own that they were planted about 1922, which makes them older than the ones at East Warburton, I think. (I'm not sure about that.)

I think this site, about the forests ofWarburton, is fascinating.
Posted by parlance at 04:06 2 comments: Links to this post

Getting ready for summer

Penny is rarely clipped, but we knew we'd better bite the bullet and do it, if we want to check for ticks, now that they are in Melbourne. 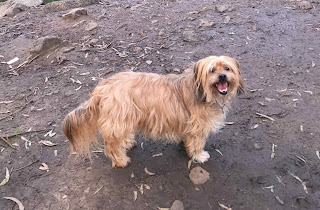 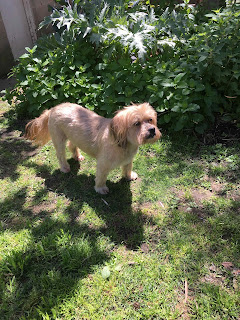 Waste not, want not - we put her fur in the compost. 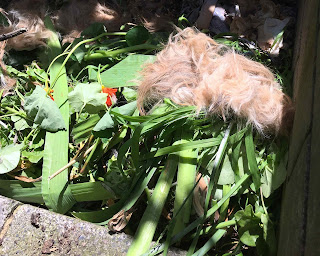 All of my composting books agree that pet hair is a great source of nitrogen. 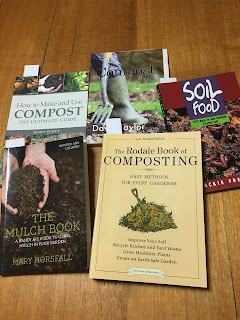 The 'Bible' of composting, The Rodale Book of Composting, says: Between 6 and 7 pounds of hair contain as much nitrogen as 100 to 200 pounds of manure. Like feathers, hair will decompose rapidly in a compost pile but only if well moistened and thoroughly mixed with an aerating material. Hair tends to pack down and shed water, so chopping or turning the pile regularly will hasten decay.


Hmm... after reading that, I realise I'd better get out there tomorrow and break up the clumps of hair.
Posted by parlance at 21:26 4 comments: Links to this post

Up until now we haven't worried about ticks attacking Penny, because they had not been reported in Melbourne. However, when we holidayed at Best Friend Retreat we put tick prevention on Penny, because we had heard the creatures were gradually encroaching into Victoria along the coast from the east. Penny had a bad reaction to Advantix, so I won't be using it again.

Which leaves us with a dilemma, because by all accounts the eastern paralysis tick has made it to Melbourne now. I guess we'll have to have her coat clipped shorter this year, and we'll have to check her regularly in the tick season.

We do have a tick removal tool, which a family traveller brought back from NewYork. We thought it was just a novelty until now, and when we looked at it, we'd feel so smug that we don't have to worry about ticks. What a pity we've now joined the majority of dog owners in having another thing to watch out for!

I've read that dog owners should keep the vegetation clipped in their yard. Not a hope of that here, because our garden is based on the 'food forest' concept. 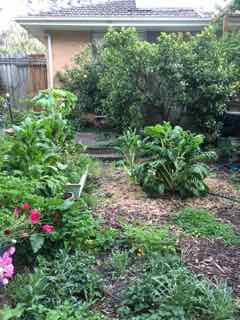 Posted by parlance at 20:01 4 comments: Links to this post