I've just taken the Dogster quiz, which I saw linked from Johann's blog. And I'm a...

I had to leave my email address at Dogster to get my results. Here's hoping I don't get a heap of junk mail. I'll be complaining bitterly if I do!
Posted by parlance at 23:03 4 comments:

Labels: dogs, fun, fun pets
In a comment on my last post about activities to keep Penny thinking, Jess the Dog Shopper mentioned a game where dogs have to fetch a toy that matches the one the human is holding. (At least, I think that's what she meant.)

Well, of course that was an excuse to pop into my favorite pet shop, Murphy's in Hawthorn, to buy a set of new toys. I could have bought a new copy of a toy we already have, but I thought it would be better to get two new ones so they could age together, with the same appearance and smell.

Two toys looked good, so I bought a pair of each. 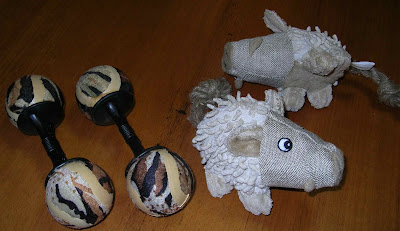 I was attracted to the little animal toys because the label said 'eco naturals' but when I got them home and looked, there was no information on the label about why they should be called 'natural'. And they're made in China. Seeing I have the greatest respect for Murphys as an ethical business, I'll assume the toys are as good as they look.

Penny loved the little creatures. They seem to have a squeaker and what might be a little crackly bottle inside. However, I don't let her have toys unsupervised, unless they are specifically 'home alone' toys like Kongs.

Anyway, back to the game. As I've learned from reading Honey's blog, I started with the simplest version of the game. Penny sat in the kitchen while I hid one little creature-toy. I came back with the other little creature in my hand, held it near Penny's nose so she could sniff it, and said 'Find this one'.

She already knows to wait in the kitchen after I've held a treat or a toy near her nose, waiting for me to hide it at the other end of the house. But this task is different, in that she sees me with a duplicate of what she's meant to find.

I was amazed. She shot off into the other end of the house and came back with the matching toy. Then she waited for her reward - the exactly identical one I was holding!

I guess it's a reward because she wants the one I have.

At last, at long last, we have a game that doesn't involve food. Hooray!

After we had played a few times with the little creatures, we played with the dumbell-ball toys.

Next step will be to put two different toys at the other end of the house and see whether she can bring the correct one back. But we won't move to that step until she's had lots of success with this simpler version.
Posted by parlance at 21:50 6 comments:

Serendipity (and Happy, of course) sent me the link for this video of a talking dog. It's hilarious! I had to listen three times.

Thanks! You made my evening.

I might be crazy, but it seems to me the dog IS talking, not just repeating sounds it has been taught.
Posted by parlance at 22:34 No comments:

After watching more of the BBC television programme, 'The Secret Life of Dogs', I was amazed by the canine genius who has a vocabulary of more than three hundred words. Betsy can bring on command a huge array of named objects. And, if you watch the video clip, you will see that she can even conceptualise from a scale model of an object to the thing itself, and even from a photograph, which I wouldn't have believed if I hadn't seen it on the BBC.

Now, Penny isn't a genius, that's for sure. But, until she had surgery on her cruciate ligament and we stopped most of her activities, she was using her brain for tricks, doggie dancing and training, every week, if not every day.

When we were told she needed to take care with the leg, we began to restrict her activities. We eventually resumed walking, and now swimming, but we forgot about the intellectual stimulation she needs.

So, it's back to training for Penny. Here's a video of our usual amateurish style of 'kitchen training'. We're challenging ourselves to increase Penny's vocabulary and I reckon by the time she's 110 (human) years old, she should know as many words as Betsy.

dogs can read our faces

I'm watching a BBC show called 'The Secret Life of Dogs'. One of the fascinating parts is about the theory that dogs have developed the ability to read the emotions shown in the human face. In experiments, dogs were looking left, at the right side of a human face shown on a screen.

I didn't know that we don't show our emotions symmetrically - apparently the left and right side of our faces take different positions. When we look at another person we tend to look to our left, at the right side of that person's face. And dogs do the same thing, even though they don't look towards the right side of another dog's face when they meet it. In other words, dogs have developed the ability to read our faces, as they have evolved with us. Here's a clip of that part of the show. I felt a little disturbed by the apparatus on the muzzle and head of the dog in study at the University of Lincoln, but the dog did appear quite happy and wasn't restrained, so I guess it was used to the apparatus. The part about facial recognition starts at the 4:46 mark on the clip.

At this site you can see a list of the different 'chapters' of the programme, but there are only two clips - and they won't work for me here in Australia.
Posted by parlance at 20:38 3 comments:

Penny meets some old friends in the Australian bush

The day started with a quick dip in the little pool Cindy had provided.

First you wait in line for your turn. 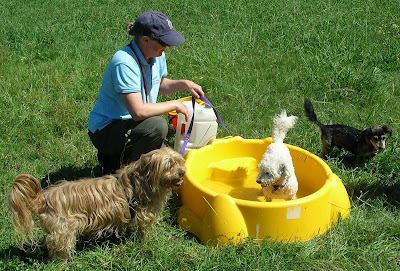 Then Cindy gives you some personal attention. 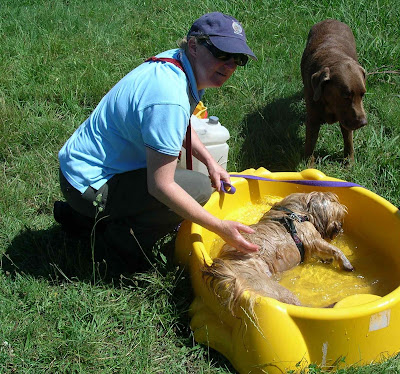 And then you return the favor by shaking some nice cooling water onto Cindy. 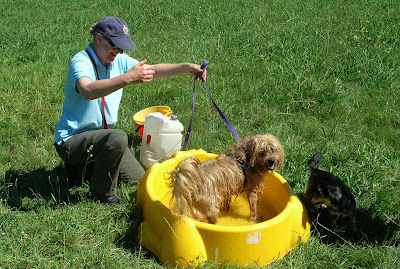 And then it's off through the Aussie bush for a stroll.

(Apologies for the terrible video. It was hard to keep up with Penny, who was ecstatic to be back with the group.)
Posted by parlance at 22:24 2 comments:

I was looking through some notes I took at a recent class and read that water-retaining crystals are not organic, and therefore it would be better to use coco coir instead. Yes, I thought, I've been doing the right thing, buying the lovely organic potting mix from Bulleen Art and Garden.

Whoa! Momentary backtrack. I've been using cocoa products in my garden? Haven't there been stories on the Net of dogs dying after finding cocoa mulch attractive and eating it?

A little bit of research and I can relax:

First, following a link from Fully Vetted, I arrived at an article on the American Veterinary Medicine Association site that says there are no canine deaths definitely attributable to eating cocoa bean mulch.

The article concludes, however

Dr. Hansen recommends that pet owners avoid use of cocoa bean shell mulch in landscaping accessible to unsupervised dogs, or at least use it cautiously around dogs with indiscriminate eating habits. The odds of dogs dying from eating the fresh mulch are low, but those suspected of ingesting it should be examined by a veterinarian.

Second, a phone call to Bulleen Art and Garden and a subsequent look at their website got me the information that their potting mix doesn't in fact have cocoa bean mulch in it.

And you know the silliest thing about it all?

My notes recommended COCO coir, not COCOA mulch. One little letter of the alphabet to cause so much thought and research.
Posted by parlance at 17:18 6 comments:

On the other hand, much modern art is ephemeral, so maybe she's philosophical about it.

Reminds me of one of the dogs on The Portuguese Water Blog who has been secretly lining up the big stuffed toys when no-one is looking. More modern art?

Perhaps we underestimate our dogs.
Posted by parlance at 17:06 2 comments:

It's that time of year once more - the time when Penny collects fruit from the plum tree - or, as I suspect she thinks of it, the tennis ball tree.

As the years pass, we relax a little about her fruit collecting, because she seems to just want to have it, rather than eat it. However, the fruit will disappear into the compost bin soon. 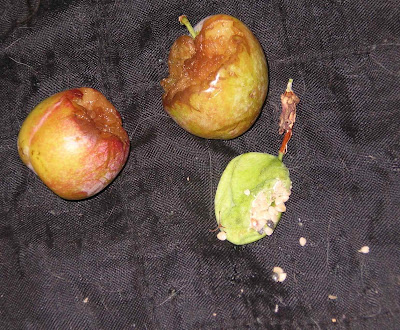 The usual crop of bird-pecked plums has been added to with a rat-chewed passionfruit. (Yep, we have rats in the garden, which is playing havoc with my resolution to kill no living creature. Earlier this year Penny did kill one rat, and now that she's recovered from her cruciate surgery, she's out looking for them once more, but I wouldn't really want to see her kill one.)
Posted by parlance at 12:11 4 comments:

I've been reading a newsletter from Fully Vetted, about chocolate.

And I'm horrified by how little cocoa powder it would take to kill Penny.

I knew chocolate was dangerous and I knew cocoa powder was worse than chocolate, but I didn't know how little of it would create an emergency. The article has a link to this interactive page where you put in your dog's weight and find out how much chocolate would be a problem, varying from diarrhoea to death.

We drink cocoa every day, morning and night. So we have to be extra careful from now on!
Posted by parlance at 20:57 8 comments:

a dog swims to start the new year

It was a wonderful way for Penny to start the new year - she swam at her old favorite spot in the Yarra river. We were a bit nervous about her first free swim since her cruciate surgery, but she seemed to take it in her stride - hmm...mixed metaphor there! 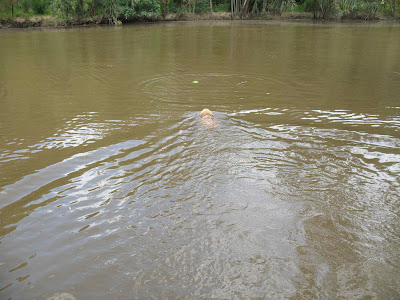 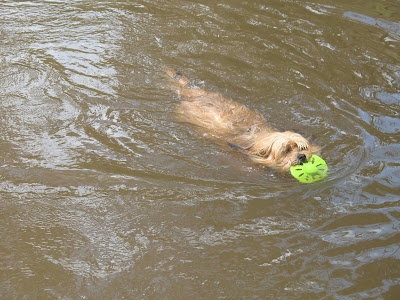 We are following the advice of our canine physiotherapist regarding Penny's recovery, and only introduce one new activity at a time, so that if she suffers a setback we will know what caused it.

However, this evening she seems fine after her swim.

For the last month we've been swimming twice weekly at Dogs in Motion, and Penny has built up to swimming for thirty minutes, so I felt fairly confident she would cope with a short swim in the river, but it was still a bit scary seeing her go out there. Thank goodness we didn't have to jump in and rescue her.
Posted by parlance at 21:23 2 comments: