Having enjoyed watching Penny swim at the indoor pool at Kepala the other day, I thought we'd head off there again today, and seeing it was a warm sunny day I booked the outdoor pool. I think it's a very good bargain to be able to have the whole pool for thirty minutes and only pay $8. 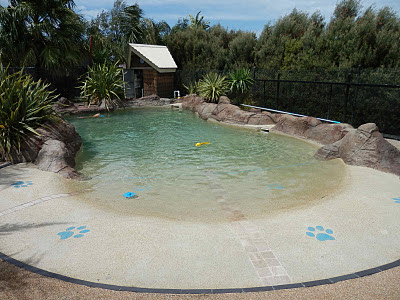 Here's a dog's eye view of the water. Inviting! 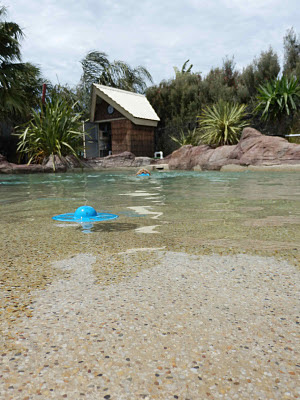 I slapped on plenty of sunblock, because this is the time of the year when we get burned, after a winter of not having to take note of the UV levels. However, when I got there I was pleasantly surprised to discover that Penny was happy to swim around fetching her toys and all I had to do was sit in the shade and watch, occasionally tossing her toys in to the water. As long as the toys were floating she was determined to fetch them all back to dry land.

Here she is, working hard to collect them all. It's rather tricky, because as soon as she gets one to the shore and heads out for the next one, the wash from her passing sweeps it back out into the water. But she did it eventually. 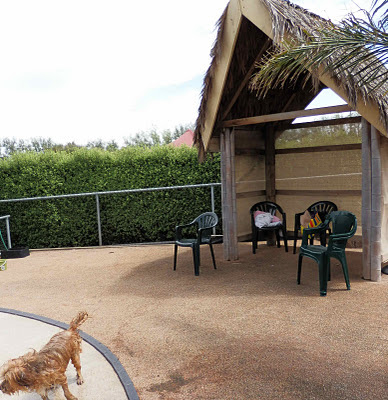 We believe it's important to keep up Penny's level of fitness, especially as she had her knee operated on last year. She had the traditional repair of her cruciate ligament, and for about seven months she swam regularly, often twice a week.
Now that we have more confidence that she is recovering well, we've returned to some of our previous activities. The long-awaited return to Cindy's Allsports class has been the highlight of our week. So it was disappointing the see that she had a slight limp after last weekend's class.
It was a hard decision to stop going to the Allsports class, but we will rest from it for a while to make sure she's okay.
So, back to the swimming...
I decided to take her to Kepala Canine Resort, because it's a bit closer than the other pool we've attended for about a year. Also, Penny can play in the water rather than just do therapeutic laps.
One of the things I love about Kepala's indoor pool is the mural. It makes me feel relaxed just to lean back on the fence and look at it. 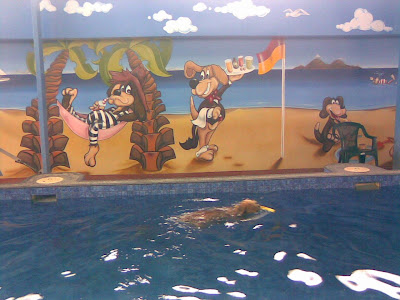 I also like the fact that the pool is raised above the level of the floor, so I can walk around with Penny and encourage her to swim by racing her for her floating toys. She gets up a real speed when I'm hurrying around the edge to grab the toy. The entry is easy for her, too. There's a raised platform for entry:

She's supposed to enter by the ramp to the right of this photo - although there's a gentle slope, dogs need to be confident enough to push off into deep water when they reach the bottom of the slope. Definitely not a problem for water-loving Penny.

She thinks that's a pretty good place to come out of the water, actually. (But about half the time she did come out at the other end, the correct place for emerging. It depended on which ramp was closer when she reached the toy.) 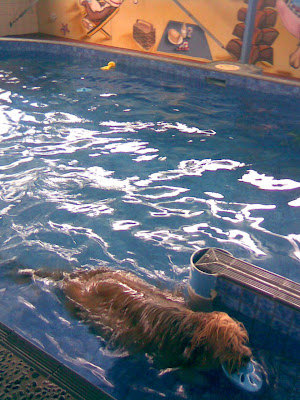 It's entertaining to throw more than one toy in the pool and watch her organising the retrieval. Eventually she came up with the idea of swimming for one, depositing it on the side, and going back for the next. 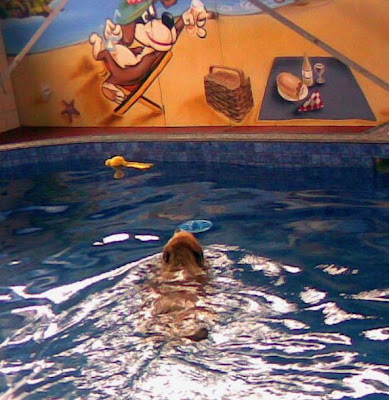 She always collected her favorite first, of course - the beloved Whirlwheel. 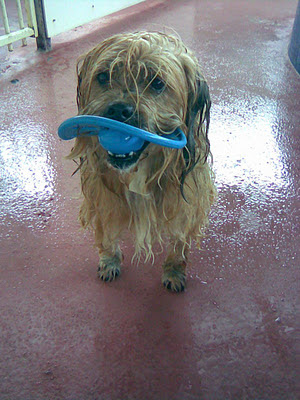 It was great to discover that her AussieDog Slapathong floats, too!
Posted by parlance at 18:41 13 comments: Links to this post

Having a dog makes you get out of the house. Sometimes it feels like a bother to have to go, but once you're on the way, it becomes a pleasure.

Today was one of those days when it's an absolute pleasure to even think of setting out. The sun was shining, not too hot, and the local gardens beckoned us to come and see.

After all the years of drought, I still can't get used to the lush growth all around. 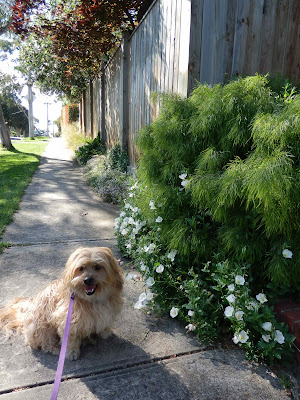 It's the best year I can remember for irises. 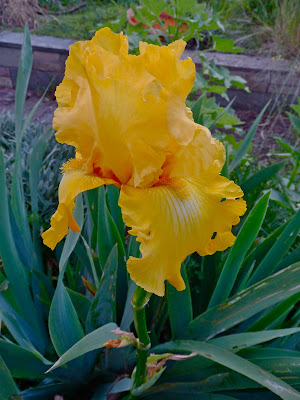 It was quite hot, so Penny seemed happy to come back home after a short amble around the streets, to sit at the front window and watch the world go by. 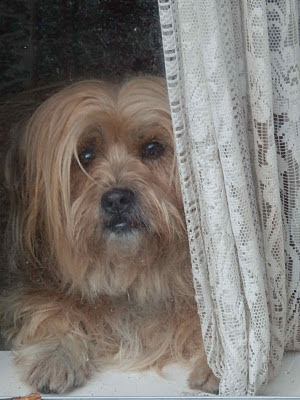 Posted by parlance at 20:51 7 comments: Links to this post

A new Japanese discount store called Tokuya has opened near us, and it's quite an adventure to shop there, because all the packaging is in Japanese. A friend and I came away with a collection of 'treasures' this afternoon - some of my items were dog-related, of course, or I wouldn't be writing about them here, lol. Their website is also a treasure trove - of hilarious English. But who am I to laugh, when I can't speak more than one word of Japanese? Well, maybe two, with awful pronunciation...

Anyway, back to the dog-related goods. 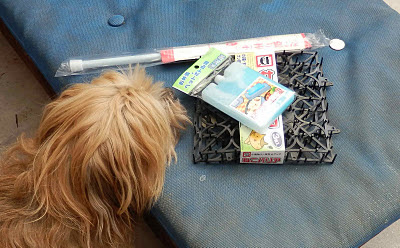 The first one is what I guessed to be plastic spikes to place around seedlings so Penny won't walk on them. Wonderful! 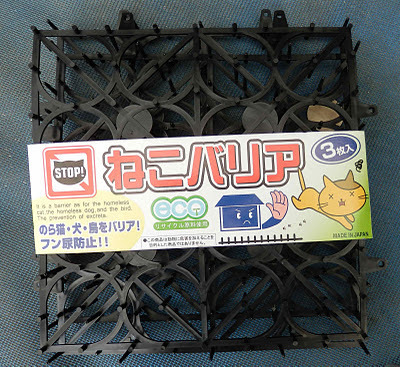 Great packaging - the message is clear. (I think...)
Here they are in position. 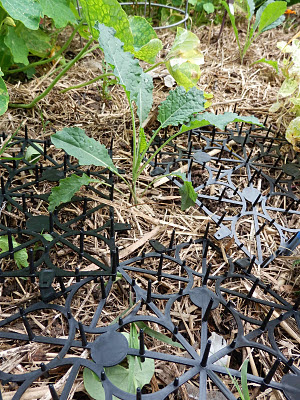 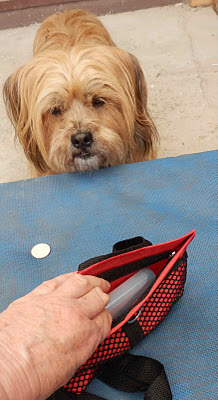 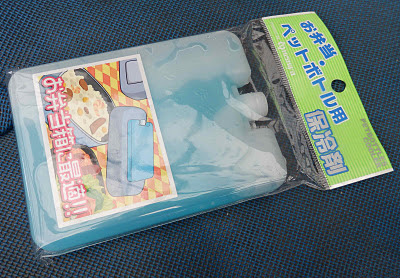 The third is an expanding pole. I guess it's for hanging things in a small space. But it will make a good target stick.

We tried it out in the backyard. The sticks come in lots of lengths. This was the smallest, I think. (Please excuse the terrible dog-handling technique. I can see I'm out of practice. We'd better start doing some targeting once more.)

Posted by parlance at 21:16 8 comments: Links to this post

I had a sore throat for most of the last week, and one of the ways I dealt with it was to rest for a while each afternoon in bed, in the belief that rest is always helpful in making a good recovery from illness. Penny loved the fact that she was allowed to curl up with me - she's not normally allowed on beds.

It did occur to me to wonder whether Penny might catch my sore throat, but I thought that was not possible. Now that I'm feeling better, I've looked on the Net and, to my surprise, discovered that dogs can catch a sore throat from us humans - but not vice versa. She's looking healthy and happy today, so I assume it didn't happen!

And that's not the only dog-connection to sore throats that I came across. The old name for a severe sore throat was quinsy. And that word came from Greek roots meaning dog collar or dog strangling. More about this at my word blog.

Now, that I can understand! If Penny is walking on lead and spots something irresistibly fascinating, she goes for it, whether or not she's being strangled by her collar and lead. From the gargling sounds I'd say she suffers a temporary quinsy.

It's the same root word that underlies the idea of cynicism.
Posted by parlance at 13:42 8 comments: Links to this post