It's just too hot to do anything today.

Penny had a couple of ice blocks made of juiced vegetables earlier. She has plenty of water available. Thank goodness the power hasn't gone off, so we have the evaporative cooling on. And a fan. 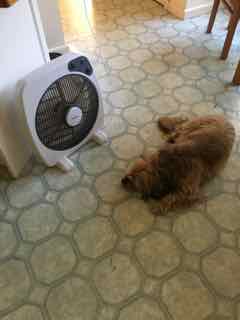 She had a walk early this morning, followed by a bath in cool water.

Penny has us looking after her, but the poor creatures that share our world are suffering today. The Little Ravens were sitting near the doggy bowl of water, with their beaks open. I put a hose dripping into another container, but they didn't go near it. I think perhaps it wasn't in the open enough, so they couldn't tell whether predators were nearby. (Not that there were likely to be many predators out in 40 degree heat.)
Posted by parlance at 18:45 2 comments: Links to this post

Poor Penny. After her lovely day on Thursday cornering a rat and eating her bone, yesterday she snaffled a piece of plastic from under some meat and had to go to the vet so they could induce her to vomit it up. She's okay now, but was pretty unhappy when she came home. 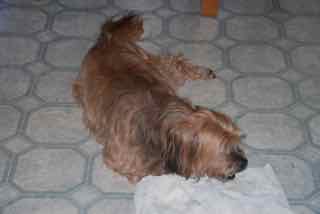 We do have some washing soda crystals on hand to provoke vomiting in a case of poisoning, but on reading this veterinary advice, I'm sure glad our own vet was open and could do it for us.

For one thing, our vet had to administer a second medication to stop her continuing to vomit, and that would have been impossible for us to do at home.

The above link has some useful advice. For one thing, it's necessary in a case of poisoning to assess whether you might do more harm than good to induce vomiting if the poisonous substance is corrosive.

Secondly, there's some good advice about using dishwashing liquid to wash off a substance on her skin. We had to do that some years ago when she had a bad reaction to Advantix, a topical tick medication.

Posted by parlance at 14:02 3 comments: Links to this post

Hunting a rat and eating a bone

Penny was outside and the humans were inside, and there came a peremptory bark. Just one. The sort of bark that says, 'Come here. Please...'

So out I went. Her tail was lashing from side to side, so I knew she had cornered some unfortunate little creature. Okay, I don't like the rats eating our produce, but neither am I particularly fond of seeing Penny kill another creature. So two humans turned on its side the planter where the rat was hiding and it shot off into the garden.

Penny didn't see it go, so she checked and rechecked for a while. 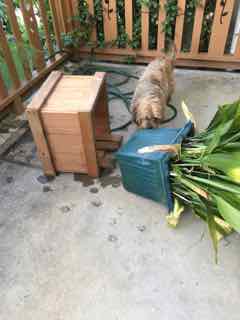 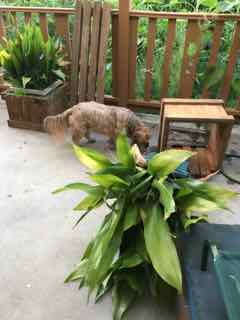 Hmm, maybe it had gone into the other planter. Nope, not there. 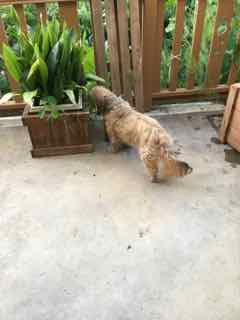 Where could that darned thing be? 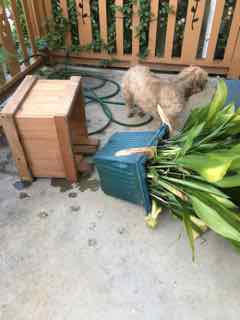 Oh, I'll just dig up that old bone I buried a couple of days ago and enjoy that. It doesn't matter that it's covered in dirt and gravel, I'm sure I've earned such a tasty reward. 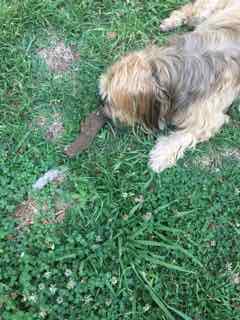 All the best for 2018 to all my readers and blogging pals!

I haven't written anything for a while, but Penny has been getting on with life much in her usual way, albeit more slowly now that she is a senior citizen.

We've moved Penny onto a raw diet, after much consideration, and so far she seems well. Her coat is glossy and she is interested in life.

We're giving a limited range of muscle meats. We started with kangaroo, which has the reputation of being the idea meat for dogs, but I'm concerned that my neighbour told me this industry is not regulated well and the babies are often left to die after hunters kill the kangaroos. I'll have to research this more. It's hard to find meat that is ethically sourced.

We had stopped with the kangaroo anyway, because of the dark, runny poos that Penny was doing. Lots of sites on the internet say that this can be expected with a change to kangaroo, but it was still scary, as I couldn't distinguish definitely that Penny was not bleeding somewhere in the upper digestive system.

We moved to veal (yes, another ethically  problematic meat!) and beef, which has led to better bowel motions. We're lucky that a shop has opened in our neighbourhood, providing a huge selection of meats, some with ground bone, some with organ meat, and some with shredded vegetables.

We also give Digestavite, Vitamin C, turmeric, antibiobotanical, home-juiced vegetables and omega oil. We added goat kefir for a few weeks, but I think that doesn't suit her digestive system, so we've stopped that one. For most of her life we've been giving her Glyde for her joints.

Today we've started her on rabbit as a muscle meat, and the naturopath who runs the pet supply shop says this is a very good meat for Penny, because it contains organ meat and bone.

So far so good. The aim is to have a couple of meals a week that consist of a meaty bone, but she tends to simply bury any bone we give her. She then goes back for it a few days later, when it smells delightful to her - but disgusting to us. So bone-eating is still a work-in-progress.