Penny is a regular grass eater, so we let lots of weedy grass grow in our yard, but in particular we have one long pot of so-called 'cat and dog grass' for her to use.

About a year ago I bought a pot of 'pet grass' and then researched it online, finally coming to the conclusion that I shouldn't have purchased it because it's an allergen for dogs.

By January this year, however,  I concluded that it had been a good purchase, because she's made good use of the grass.

So today I noticed the grass is in bloom. 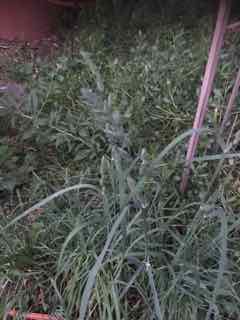 I've cut off the seedheads. The grass may die, I suppose, now that it has bloomed. But I'll certainly buy another pot of it, if so. 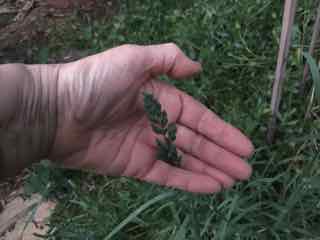 The grass is dactylis glomerata.
Posted by parlance at 22:00 2 comments: Links to this post

I've been giving Penny a 'dob' of goat milk kefir with each meal lately, in an effort to improve her gut health and thus her immune system.

So far there are no problems, even though I accidentally dropped in more than a 'dob' yesterday.

Two of the humans in our household drink kefir ourselves every day (home made, a very easy process) and feel it's doing us good, but we wouldn't have given it to Penny without the say-so of a canine specialist. However, when I saw it at the canine naturopath's shop I trusted her to have researched it well.

This article is one of many online promoting the benefits of kefir for dogs.

However, this  article suggests water kefir may be better than dairy kefir. I haven't tried making that myself, and the naturopath doesn't sell it, so that may be something to look into in the future.

I'm interested that the same article mentions sauerkraut. I've seen sauerkraut in the fridge at the naturopaths's shop, but she doesn't make it with salty water. She says dogs don't need salt. (I'm not sure I understood that correctly. I'll check next time I'm there.)

Skepvet has looked at studies dealing with the use of probiotic supplements for cats and dogs, and I find that site interesting. But that's supplements, not actual foods like sauerkraut and kefir. The site says,  'There is no high-quality, consistent evidence for most suggested uses of probiotics.'

On the other hand, my doctor recommends the use of probiotics after antibiotic usage (in me, a human), and I suppose at least some of the studies on that topic were conducted on animals.
Posted by parlance at 17:45 2 comments: Links to this post

Wow! It's been more than a month since I posted.

We're still keeping an eye on Penny's joint issues, trying to make sure she's not in pain. Also, she's begun licking herself again, because of what we assume are seasonal allergies.

We tried Apoquel, on our vet's recommendation, and the results were instant. By the next day she had stopped licking herself. However, on reading this article about the other effects of apoquel use, we decided to discontinue it, given that Penny's itch is not too bad.

We're trying our vet's idea of bathing her feet and perineal area every time we come in from a walk, and so far the itching seems under control.

One of the main reasons we didn't want her on apoquel for too long is that she already has lots of lipomas on her body, and some warts on her head. So we knew we'd worry excessively about the possibility of her developing more lumps because of the treatment.

So, it was particularly interesting to run across Penny's littermate in the park yesterday, the second time in thirteen years we've met him.

He, too, has lumps. He, too, has warts. And, to top it off, he scooted around on the grass as the humans chatted.

It was such a relief to see that these are not huge problems, that the other human doesn't get as worried as I do. Penny's brother was obviously happy and well, even with these similar issues.

One little tip I'll try is to trim Penny's tail like her brother's is done, so we can wash her effectively, and to make the application of ointments easier. 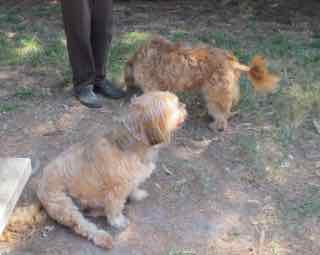 Penny is sitting with her rear leg stuck out, and her brother doesn't seem to have the same joint problems, so I suppose our participation in energetic sports may have given her problems. But she loved her agility and her flyball, so here's hoping it was worth it.

The two dogs didn't spend much time socialising. I  wonder if, after thirteen years, they even remember each other? 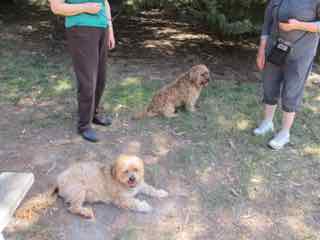 Posted by parlance at 19:11 2 comments: Links to this post