When we go out walking, we sometimes drop something when Penny's not looking, and then act as if we're distressed, saying, 'Where is it?', and Penny races back to show us where the 'lost' article is.

I thought of this trick as I watched the cute little KLM beagle racing around the airport to return lost items to passengers, and thought it was lovely.

After that, I had a look around the Net and discovered there's no such dog helping out in KLM's lost-and-found department. It's just a publicity stunt.

But I still loved the clip. I've watched it three times already.
Posted by parlance at 19:10 5 comments:

Penny and I go out to the garden each night after dinner. I don't know when this routine started, but I do know she's got me well-trained. A few lengthy stares from her have me getting to my feet and unlocking the back door.

Penny inspects the garden and has a wee, and I look for slugs and snails and destroy them! We garden organically, so I use the collect-and-squash method. But what about those earwigs that are eating our baby plants? It's been quite a dilemma, because the little critters are too quick to be collected, and I'm too squeamish to stand on them, anyway.

Well, here's our new earwig trap, just set up today, as per the instructions on Deep Green Permaculture. 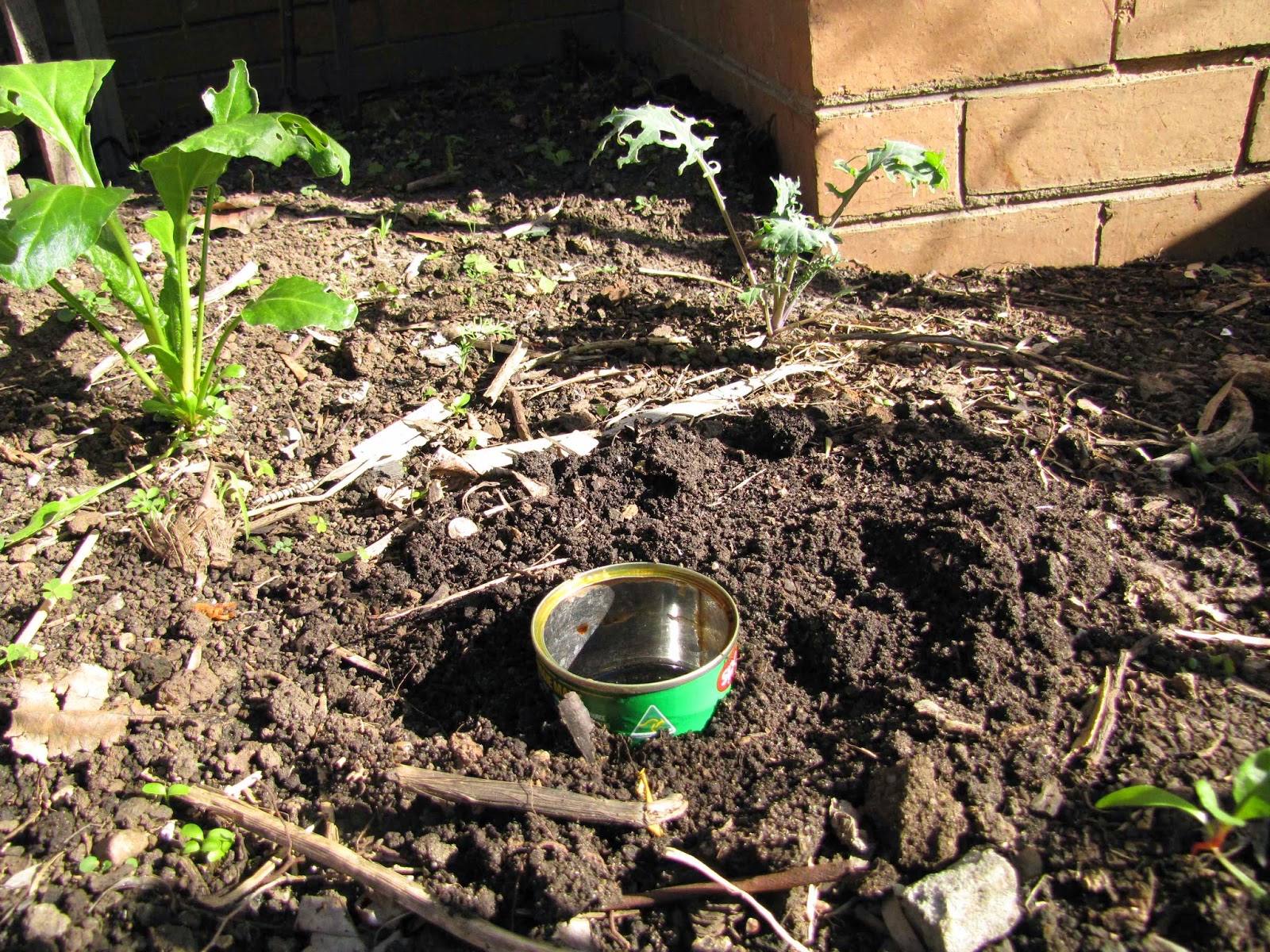 Given that the ingredients are soy sauce, oil and water, with a drop of detergent to break the surface tension, I thought the instructions to cover the trap were timely. I've used a heavy bit of paver, hoping that Penny, who loves oily food, won't be inclined to push the paver aside and taste the bait in the trap. 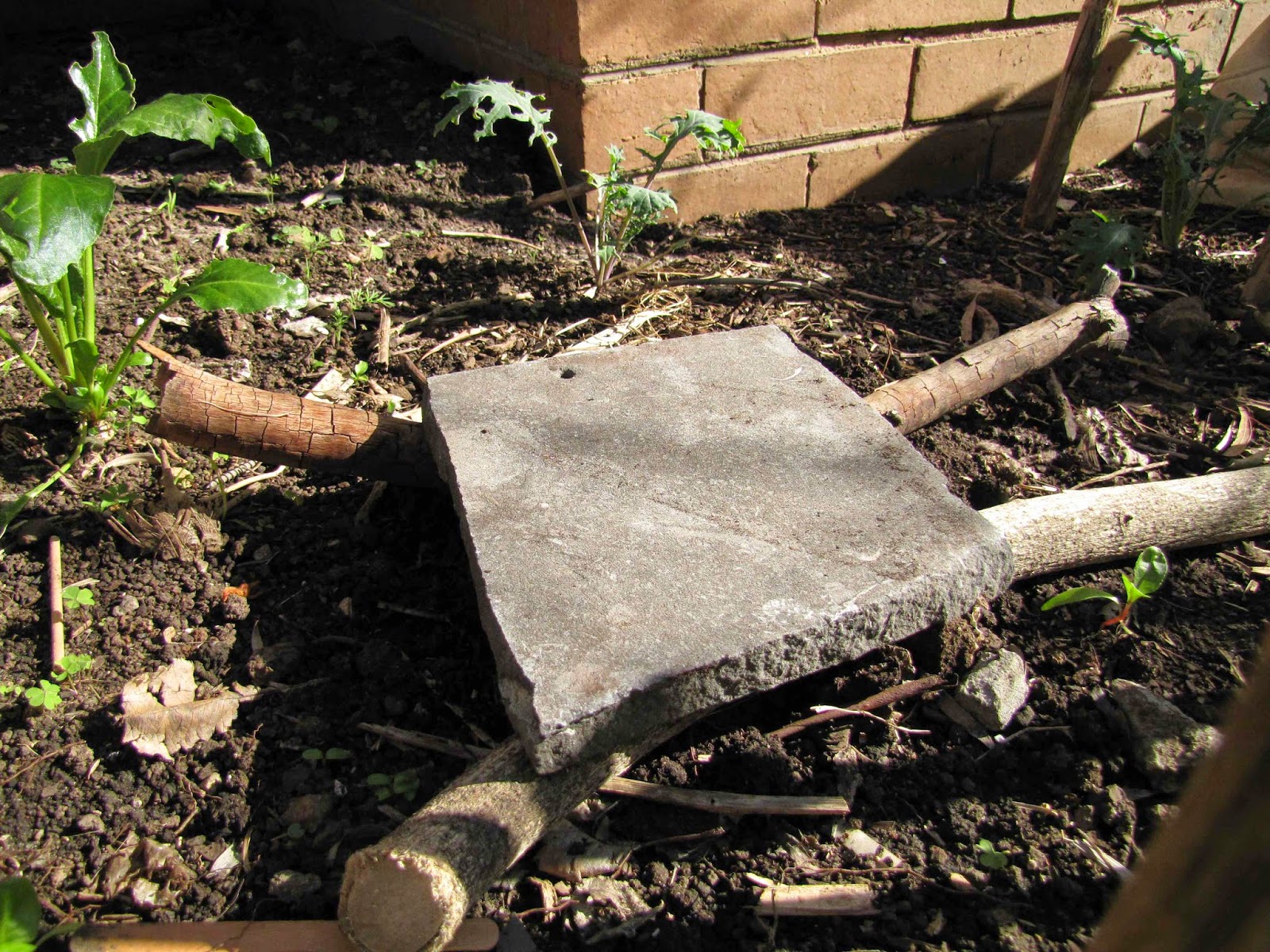 The whole kit and caboodle is surrounded by the flimsy fence I put up when I buried lots of delicious rotten bokashi compost in this area, so I hope that will be an extra deterrent to Penny. She's good about respecting barriers. Well, usually... 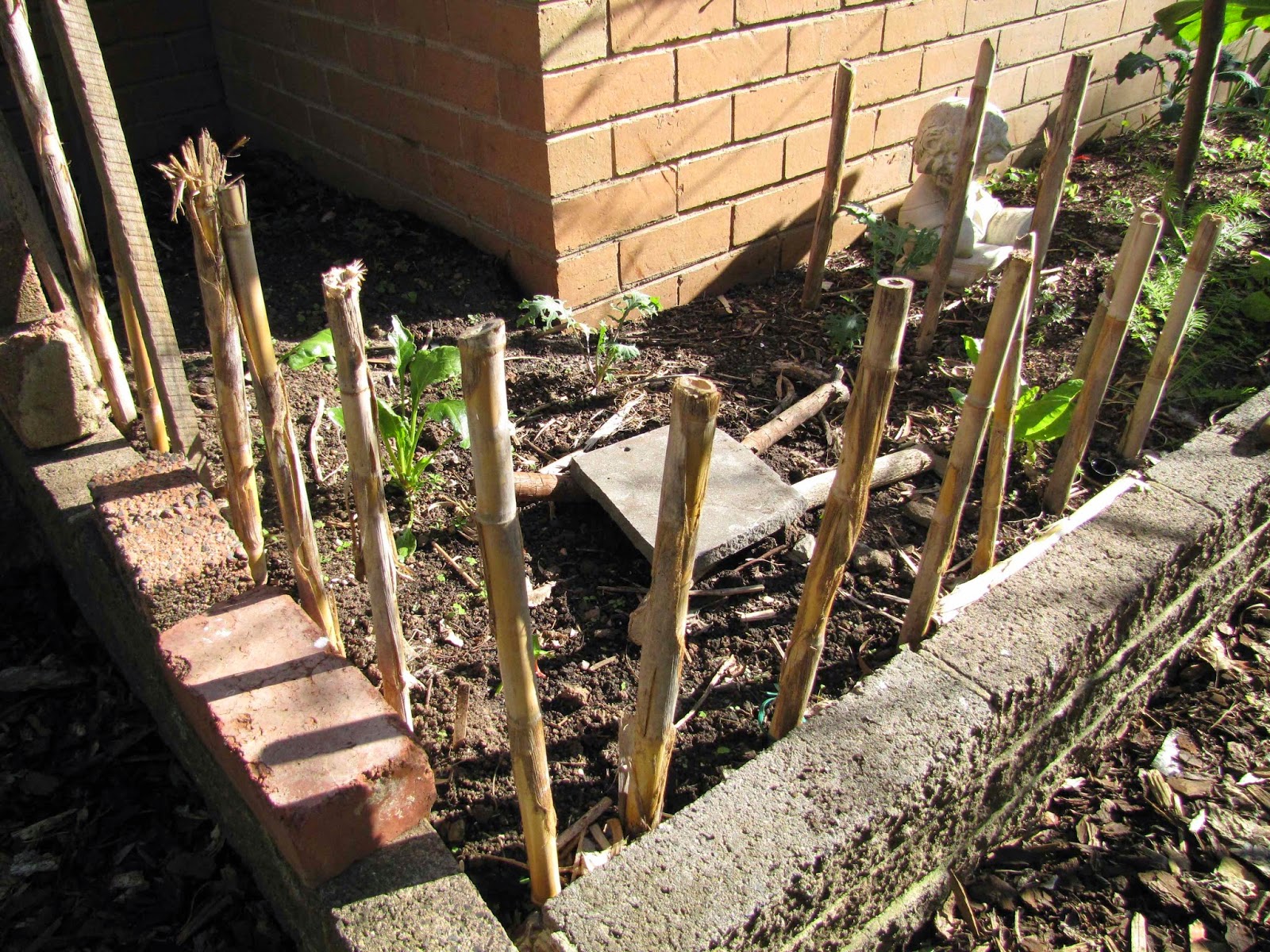 Bowen therapy for skin conditions and for joint aches and pains

Another pleasant trip to Yarra Glen today for Penny's Bowen treatment and for Reiki. We go there regularly.

And I'd better confess up front that her human - me! - has a wonderful Bowen session too, and loves it. (After all, it's my duty to check out what Penny's experiencing, isn't it?)

Penny's featuring on the Facebook page for the therapy studio - Bow-Rei Me. Doesn't she look relaxed and happy?

I'm optimistic that the therapy is not only making a difference to her joint pains, but also helpful to her itchy skin.
Posted by parlance at 23:59 2 comments:

Police estimate there were around twenty thousand people at the huge rally in Melbourne today. We gathered to tell our government that we do care about the environment and that we - the voters - demand they take out insurance against disaster by supporting sustainable energy use.

The organisers said they believed there were thirty thousand at the rally.

Whichever number you believe, it was a lot of people standing up for the environment. 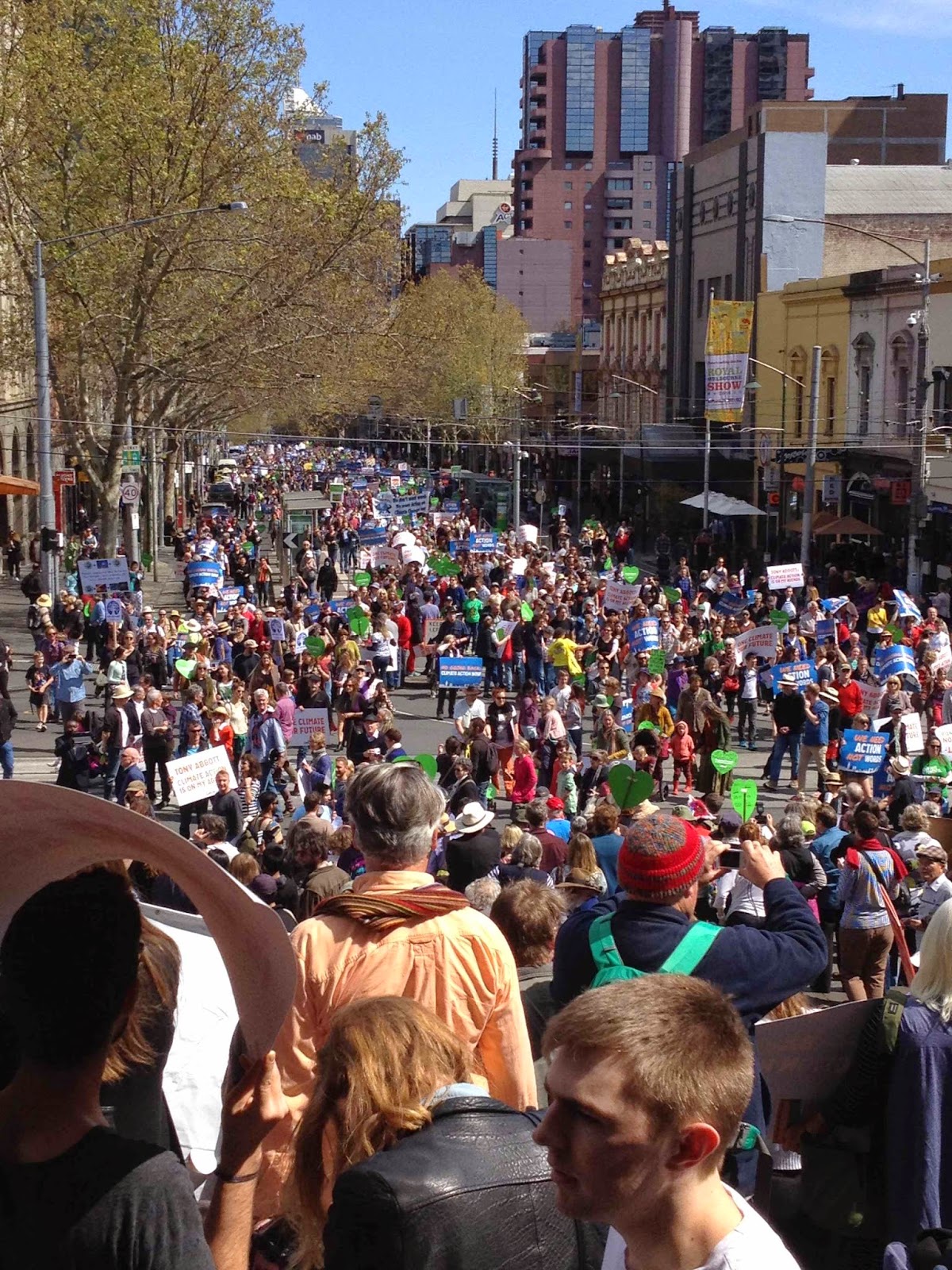 And there were dogs, too! 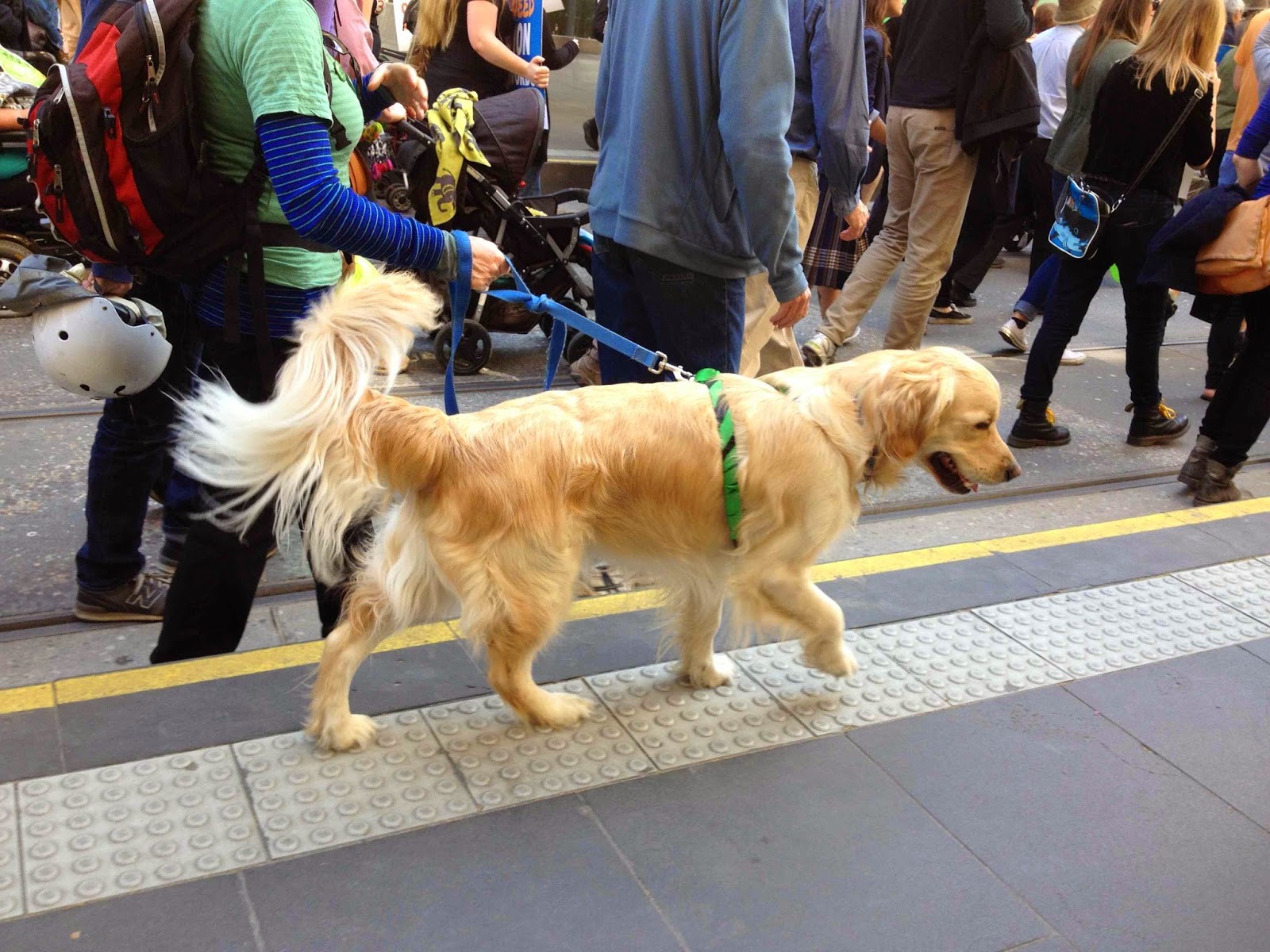 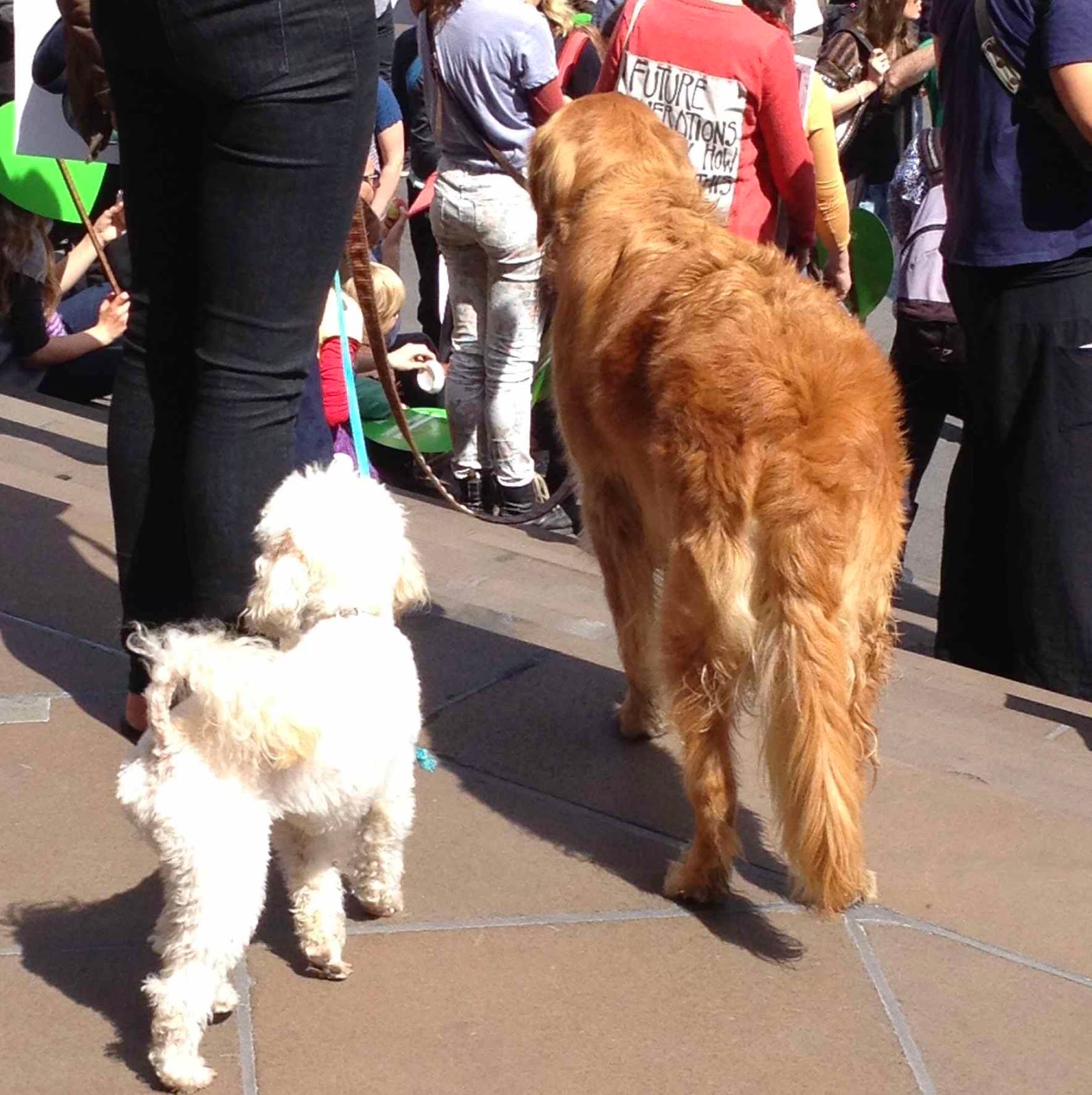 When I travelled to Central Australia recently, Penny, of course, stayed home.

The area around Uluru and Kata Tjuta is beautiful and is not a desert, as I had thought. It is a semi-arid landscape and has supported an ancient and living culture from time immemorial. 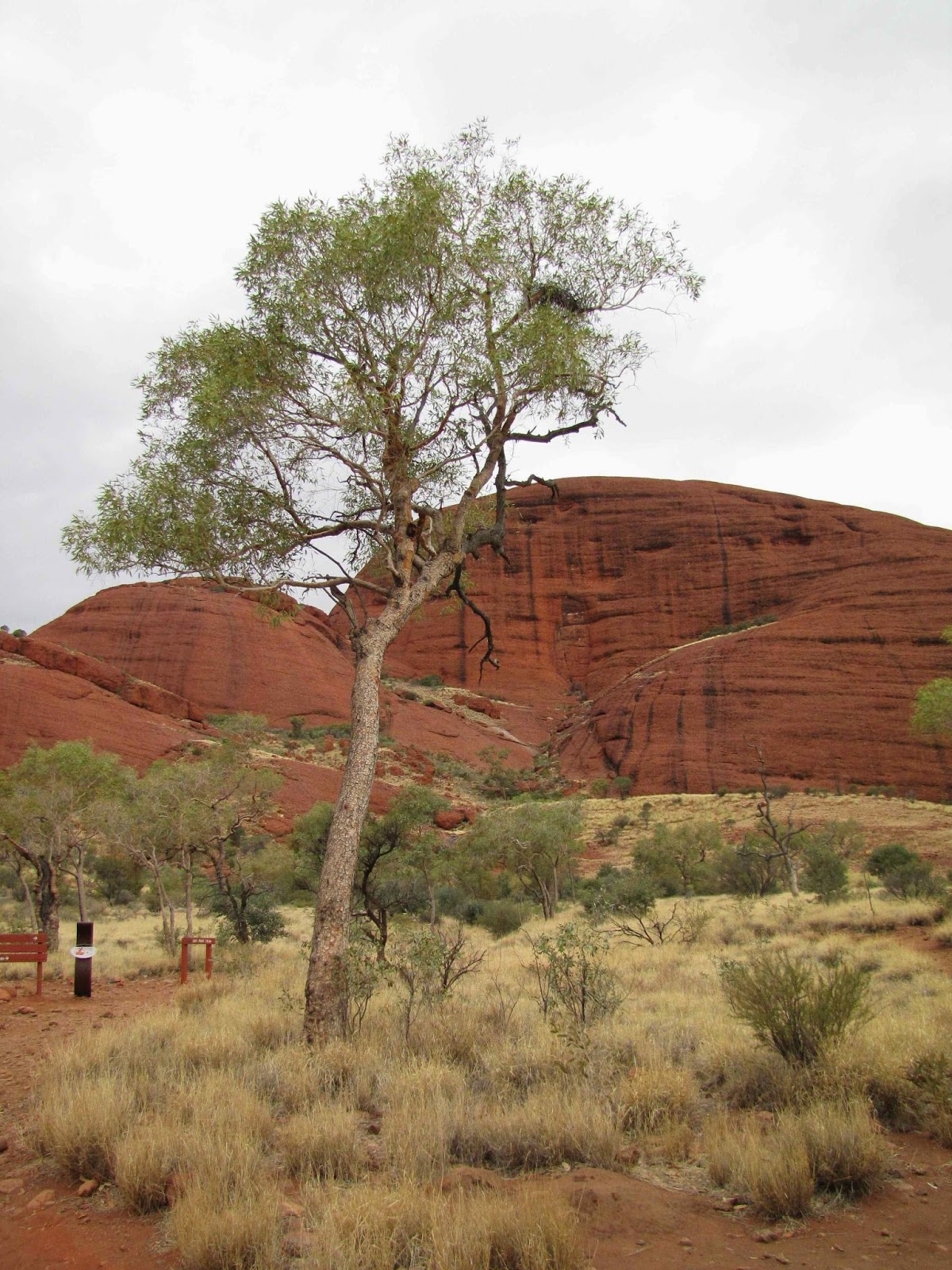 One of the most enjoyable activities I took part in was a dinner in the bush, called The Sounds of Silence. My friend and I arrived in a mundane way, on a tour bus, so we were thrilled to see another group arriving... 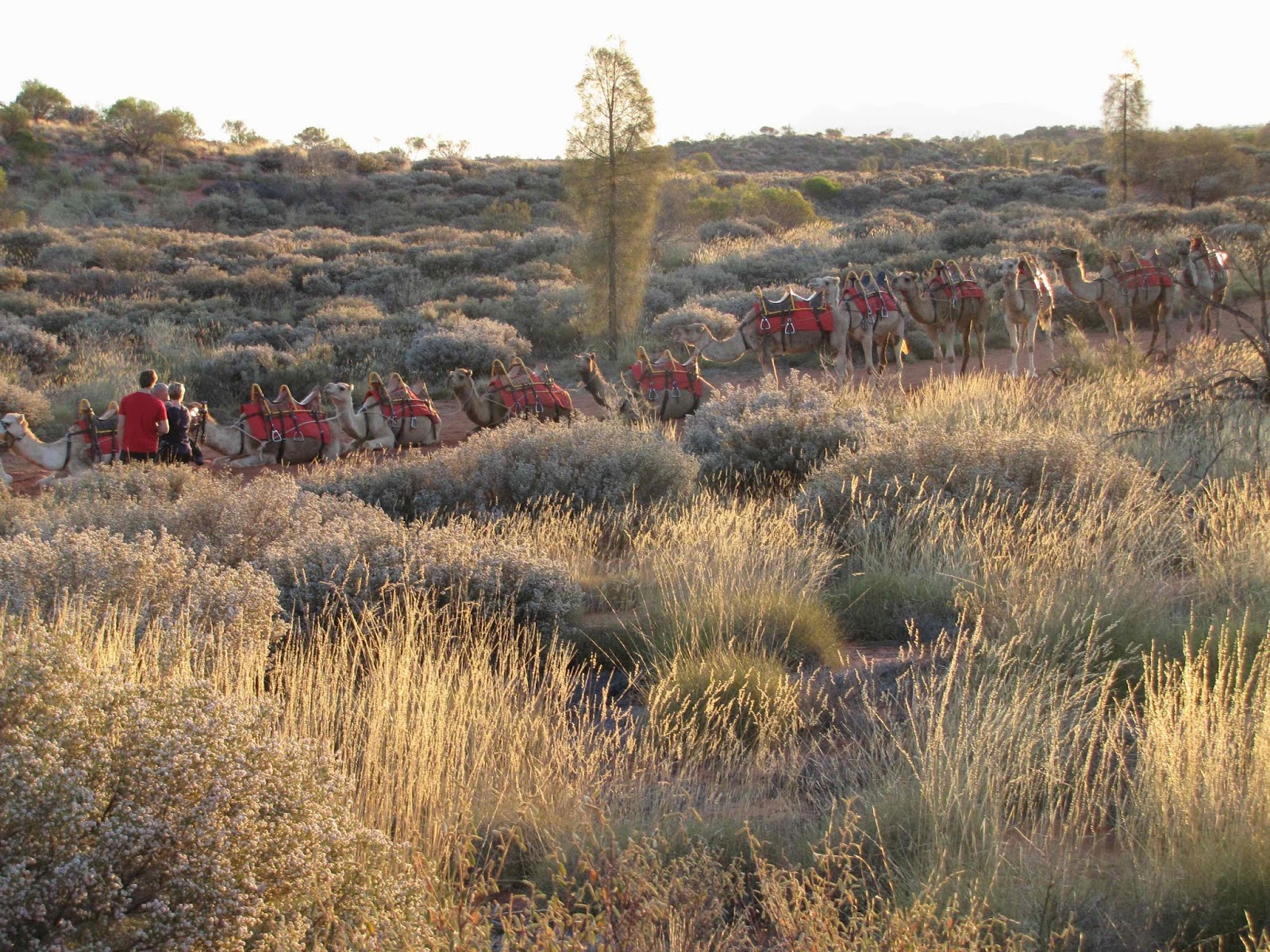 The leaders of all the tours we did gave us lots of information about the camels who roam free in the centre of this continent. Basically, they don't belong there, but some farmers are now turning from running cattle to herding camels. Apparently the camels here are remarkably disease-free compared to camels in other parts of the world and many are exported to The Middle East.

We were told again and again that one way to control the overpopulation of camels might be to use them for meat, so I was interested to see this packet of dog treats for sale here in Melbourne, at Murphy Brothers. 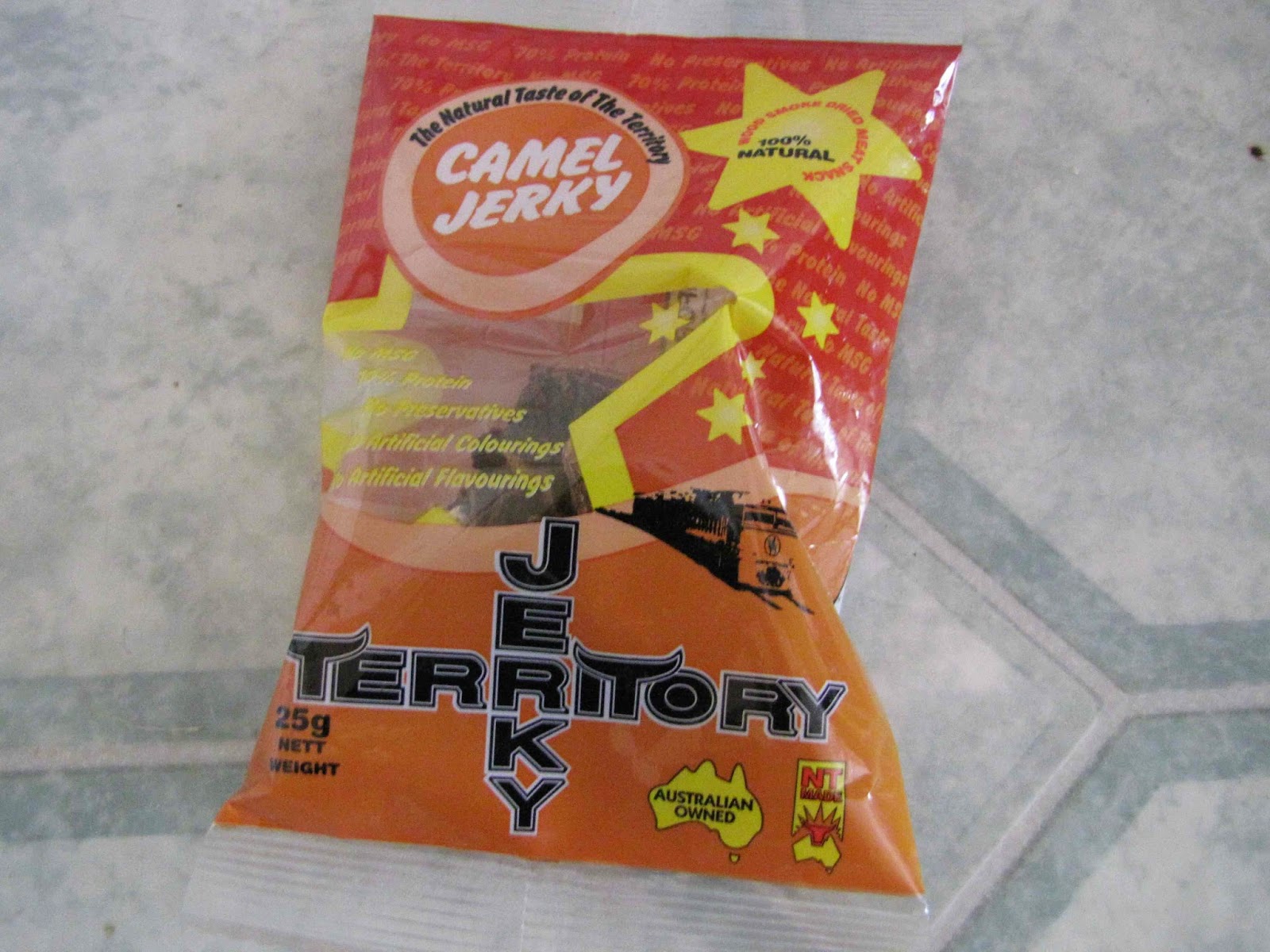 Penny thought the treats smelled rather good, and when I gave her some, she gobbled them up! 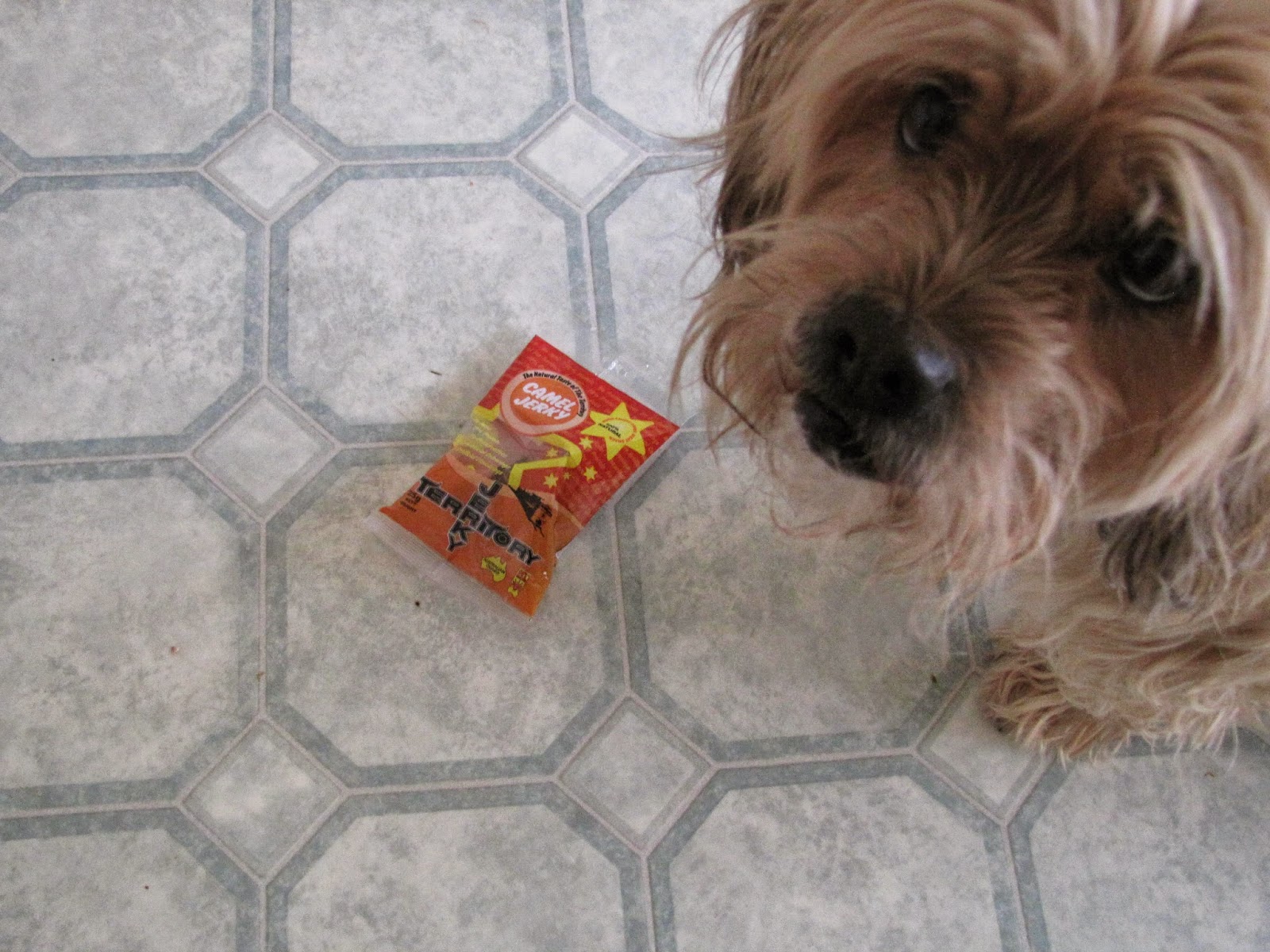 I haven't had the heart to blog recently, because we've been frightfully worried about a lump in Penny's neck. But we've just had good news. Well, sort of good...

When we noticed the lump, we thought it might be yet another lipoma. (She has three or more, now, but we don't intend to put her through the trauma of surgery unless necessary, so we're simply observing them.) There are lots of sites on the internet with information about how common lipomas are in older dogs. This is one site, and it suggests that all lumps need to be investigated before deciding on a watch-and-wait approach.

However, we - and the vet - thought this lump felt strange, so even though a needle aspiration seemed to indicate it was a cyst with some infection in it, he suggested surgery to remove it. We agreed.

Penny started on antibiotics to settle the infection and duly had her surgery. On the day, we waited for the phone call to say she was fine. But when the phone call came, the vet nurse suggested we make an appointment to talk to the vet as we collected her. Little alarm bells went off, so both her humans went together, to give each other moral support.

The long and the short of it was that the vet had found the lump sitting around a major blood vessel, so he stopped the surgery, having taken a piece off the lump. It was sent off for a biopsy and we waited...

We kept Penny beside us every moment of the first couple of days, to check she didn't scratch at the stitches, which pretty much she didn't. 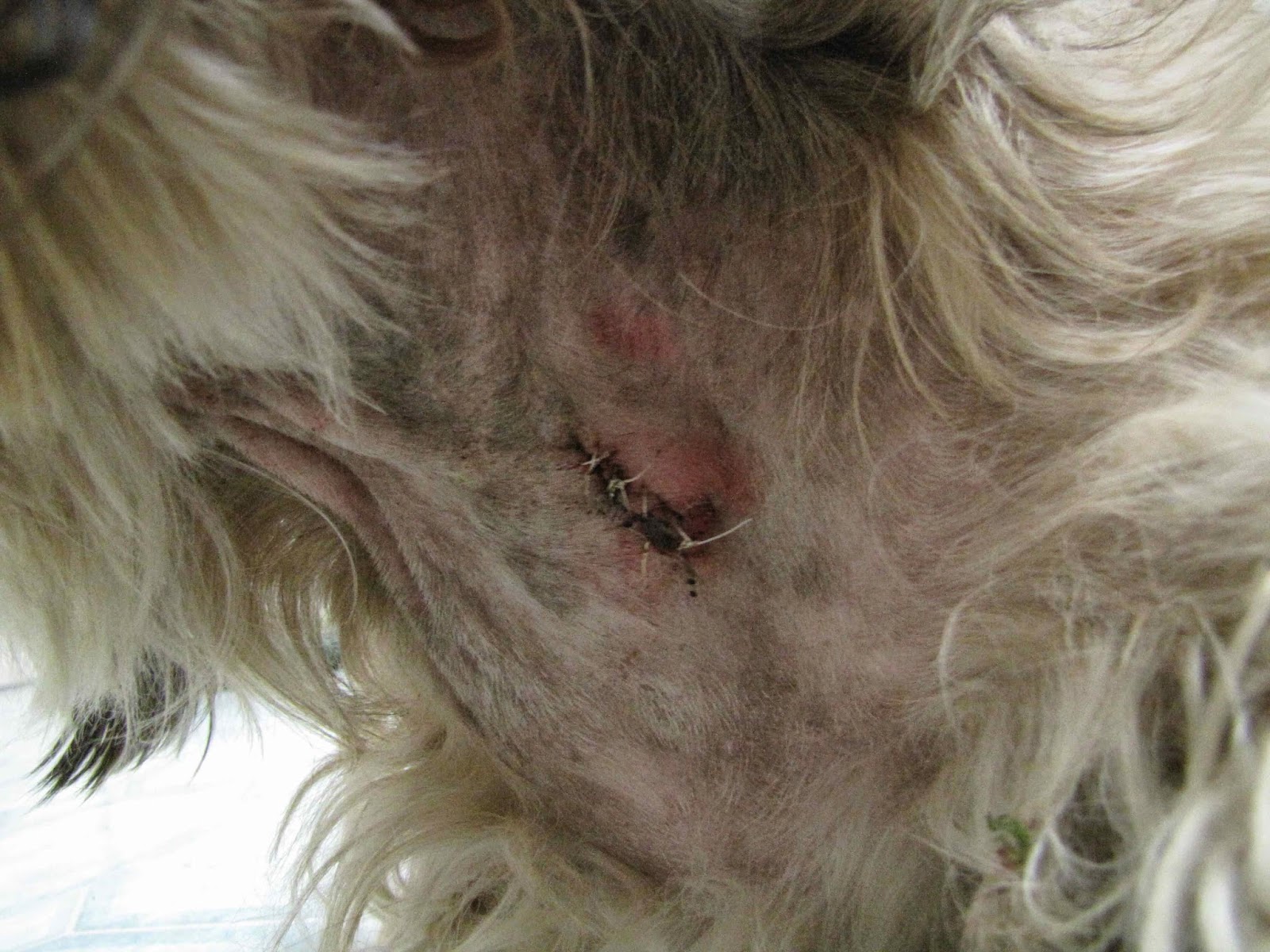 She even got to sleep beside one of her humans, which doesn't normally happen. Like the Princess and the Pea, she reclined on a tower of soft mats. 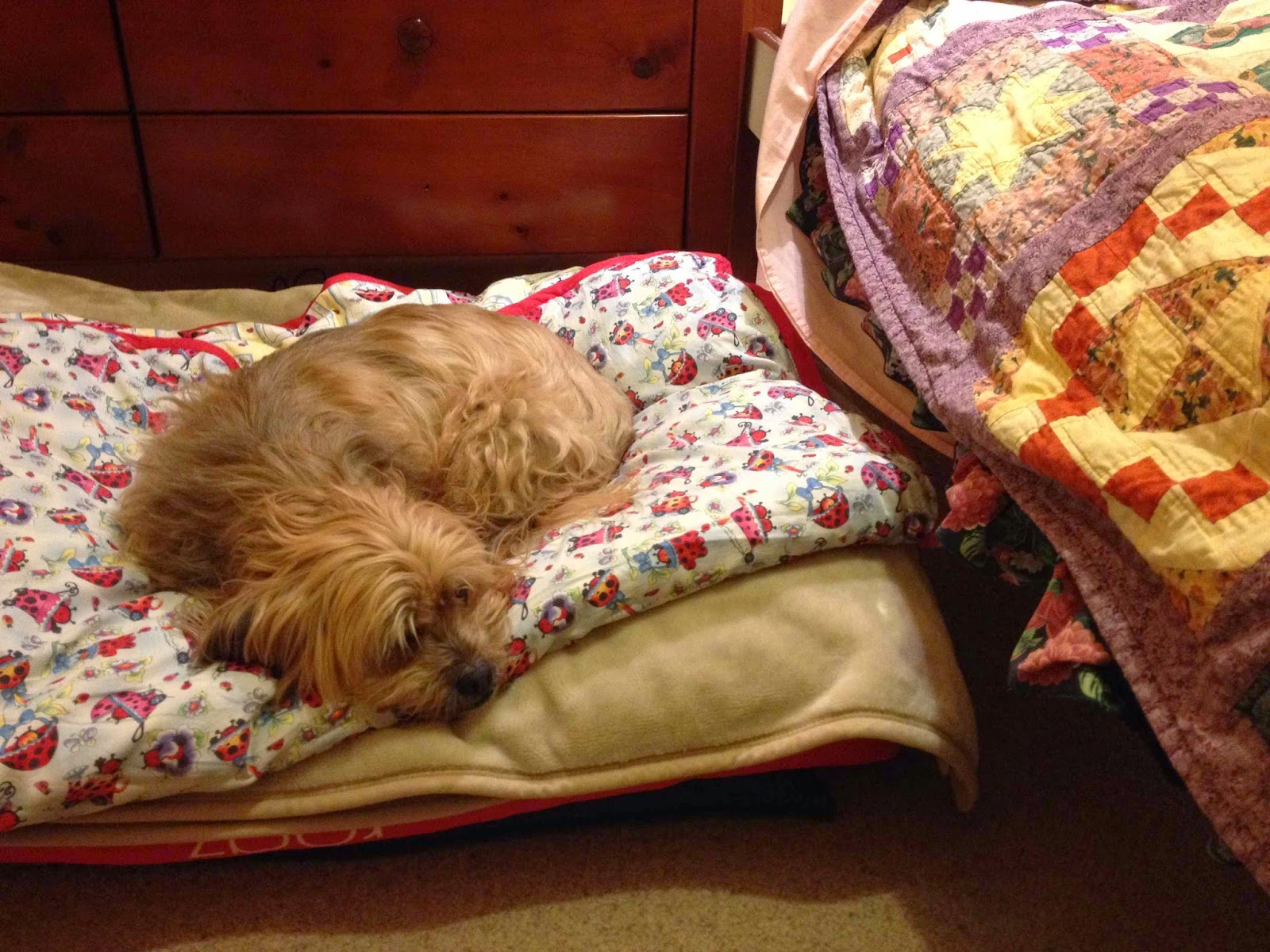 Today we've learned that the part biopsied is a lipoma, and, to use the vet's words in the reassuring phone message he left for us, basically 'harmless' and 'benign'.

But it's still beside that blood vessel - the jugular - and it showed two different results in testing, lipoma and cyst.

I called in to discuss it with the vet, and was impressed with the amount of time he spent explaining to me what the situation is. We'll be keeping an eye on it, checking it every month to see if it is growing. I asked if it might grow inside where we can't check it, but the vet said it will grow out, if at all. He said not to check it more frequently than once a month, because we might become too accustomed to it and not notice a change.

Here's hoping all will be well.