the result of a dog eating grass

Penny was eating heaps of grass on Sunday (and she had been grazing since Friday) so we discontinued her pain medication - Previcox - having read that it can cause nausea. Interesting discussion on this  drug here. I generally would trust a specialist vet over unmoderated discussion on the internet, but I'm glad we stopped this pain relief and I won't allow her to have it again, if possible.

And this morning - Tuesday - when we first got up from bed, we were greeted with this in the house! 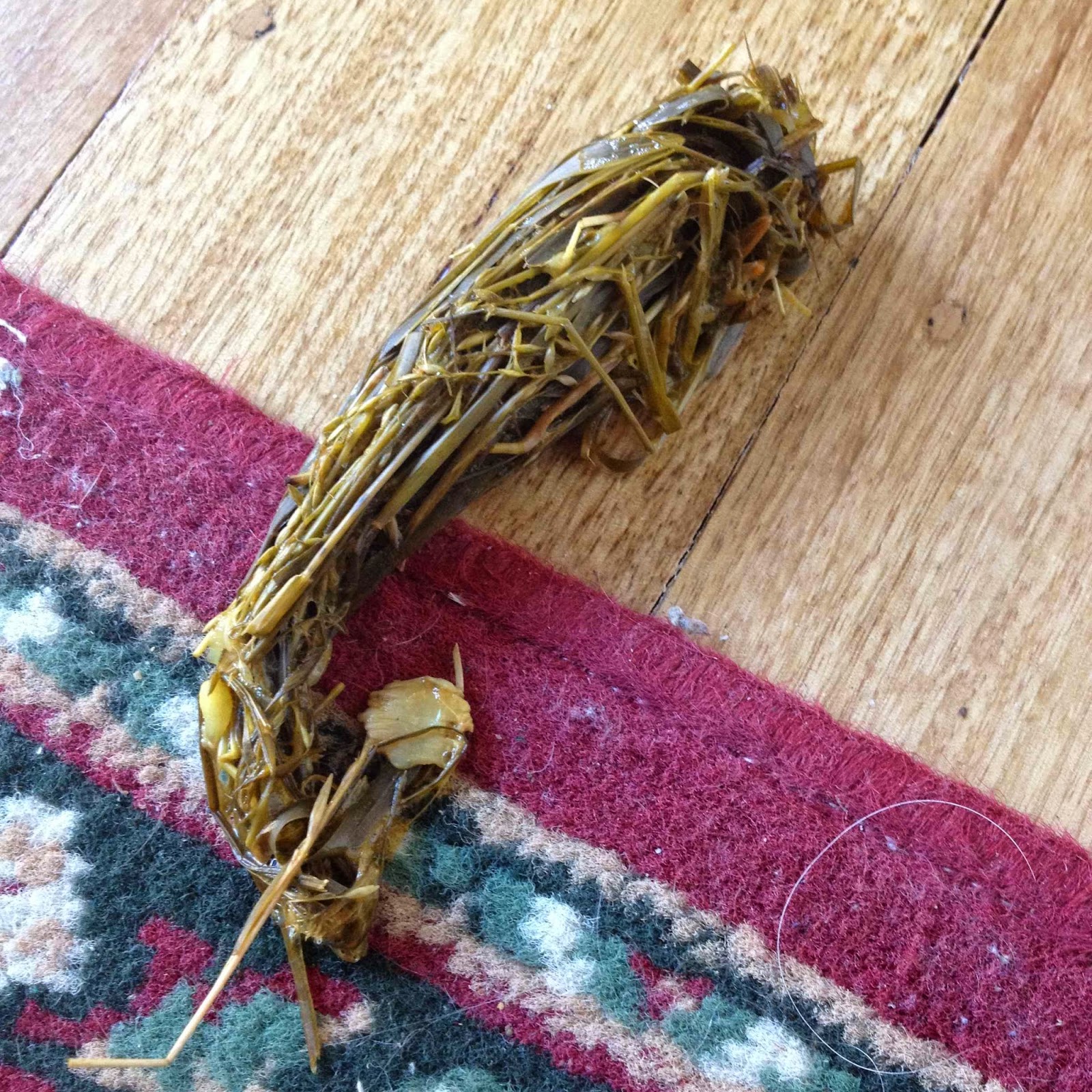 We don't know which end it came out of, but tend to think it was the rear end, because we weren't woken by the retching and other horrible noises that usually accompany a vomit. On the other hand, she has in the past produced things like this from either end.

At all events, she is lively and happy today, though she still has a bit of a cough when she plays energetically with her toys.

Posted by parlance at 20:17 6 comments: Links to this post

Poor Penny is probably not feeling too well, to judge by the amount of grass she ate today. She has always been a grass-eater, but today's grazing took more of her time than usual.

I'm hoping it's not a side-effect of the Doxycycline she was prescribed for her symptoms accompanying her cough, because she still has the cough and there are a few days to go.

On the other hand, it may be an unwanted effect of the Previcox she's taking as pain relief after her surgery last Thursday. I'll ring the vet hospital tomorrow and ask if it seems reasonable to stop giving her this drug, seeing she seems to be comfortable and the wound is healing well. I notice that vomiting is a common side effect.

I guess it's one advantage of having an 'edible forest garden', which involves having lots of plants and not fussing too much about so-called 'weeds' - there is plenty of grass for Penny to graze. 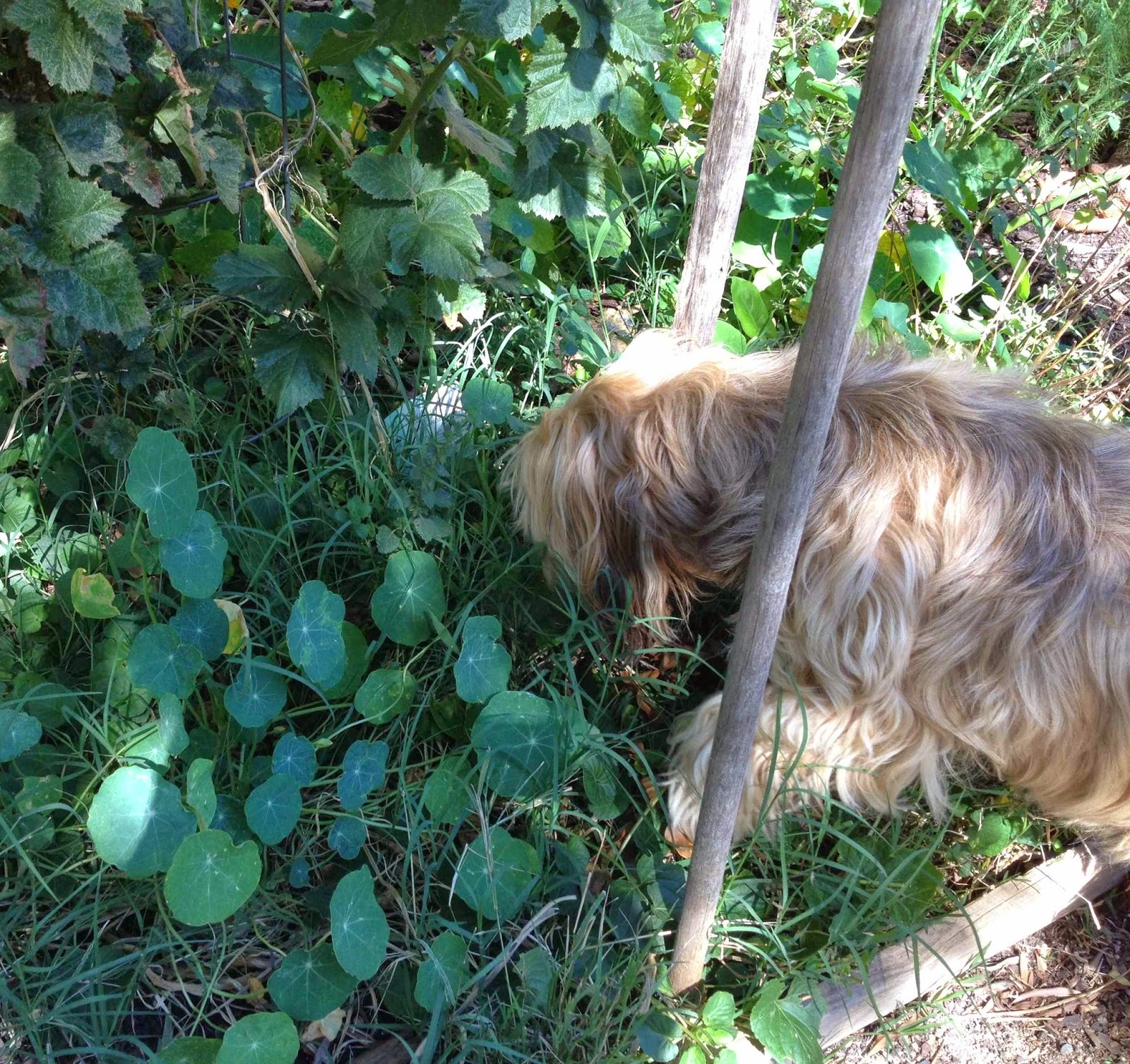 I have in the past tried to see which grasses Penny likes to eat when she's not well, sometimes without much success, but this time I definitely saw her trying out panic veldt grass, because when she came inside she had a seed stalk stuck in her teeth, lol. (Apologies for the blurry photo.) 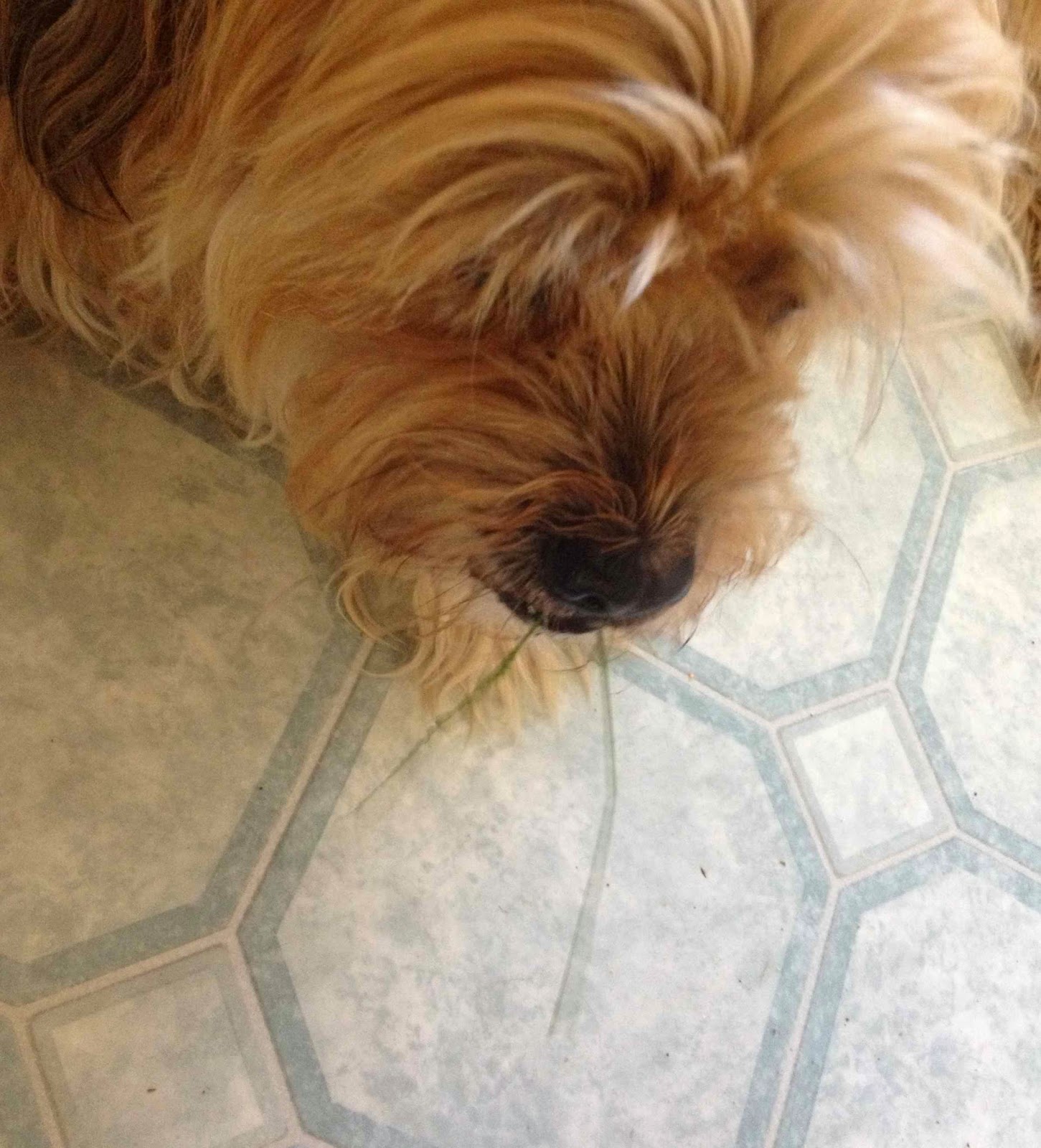 Posted by parlance at 22:47 3 comments: Links to this post

those darned lipomas scare us

For about six months we've been worried about a lipoma in Penny's neck. We tried to be optimistic about it, but our local vet thought he should take it out. However, he decided that because it was so close to her carotid artery, he should stop the operation and we should wait and see what it did.

It's been simmering in our minds as a generalised anxiety, and when I took her to the vet yesterday to talk about her cough, of course he also re-examined her lipoma and thought it was time to consult a specialist surgeon. (We've been going to our local vet each month, BTW, to keep a check on it.)  I was concerned that it might be pressing on something in her neck and making her cough.

We were fortunate to get a specialist appointment for today.

Off we went, Penny most concerned that her worst fears had finally come true and her humans had forgotten to feed her. Of course, it was only because the specialist centre told us not to give  her food in case they operated.

Well, they did. And it was great news. The lump was a simple lipoma, not invasive, as everyone who examined it previously thought was possible.

And now she's home, having got rid of this worrisome growth. She has four more lumps that we know of,  but the surgeon examined them and said it should be okay to leave them alone.

When she arrived home, she was tuckered out, but managed to make her way to the kitchen when she heard dinner being prepared. 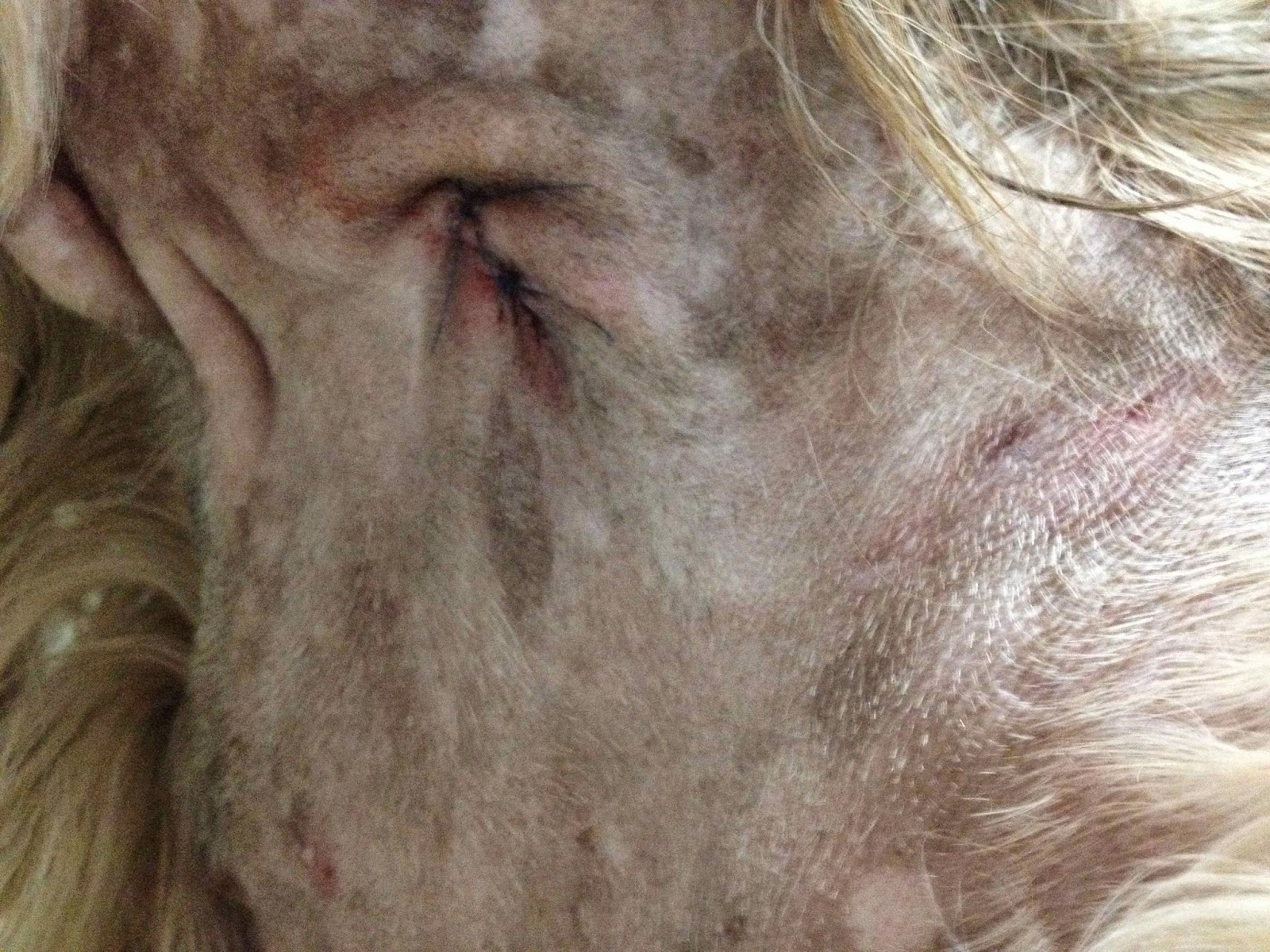 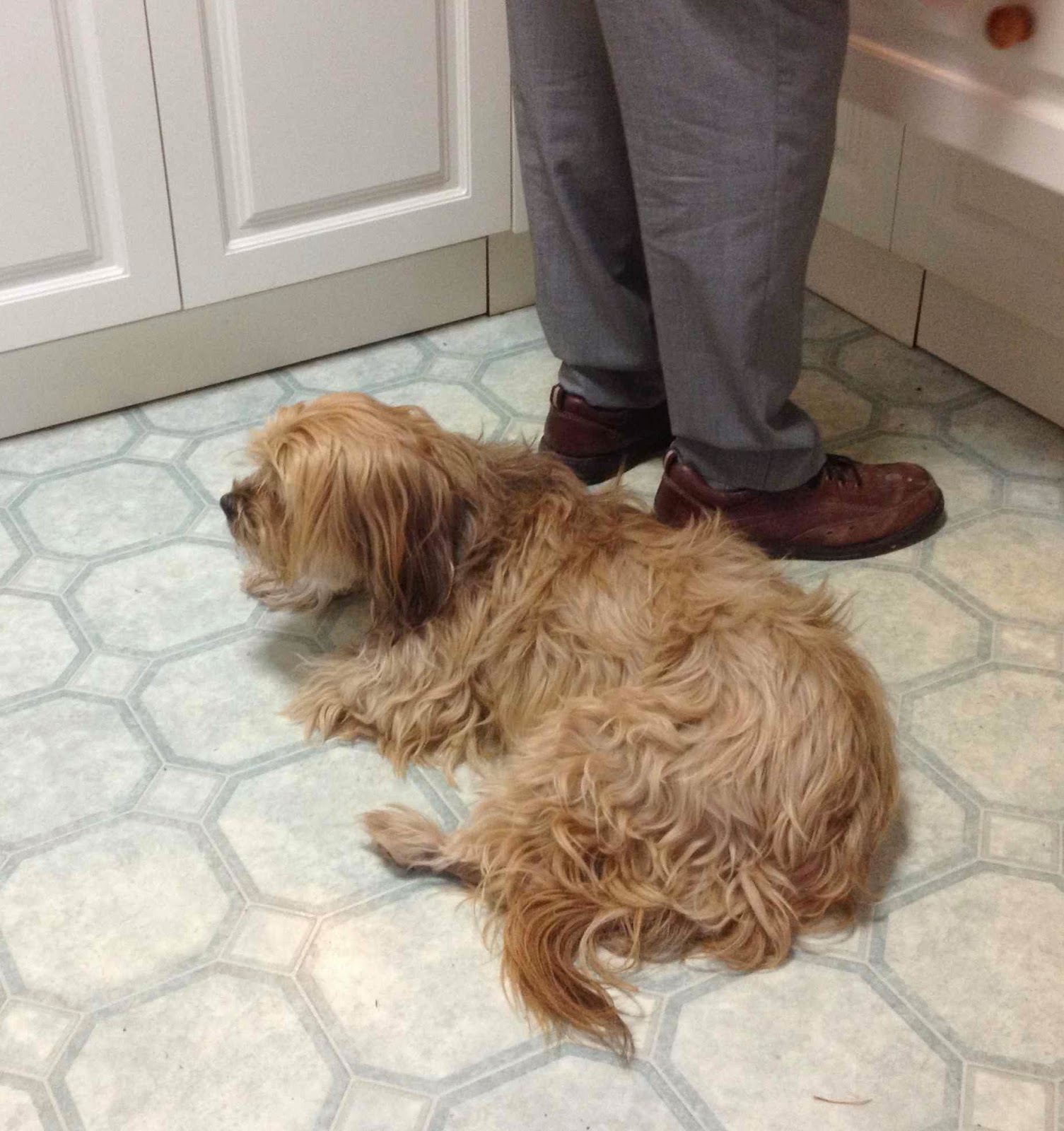 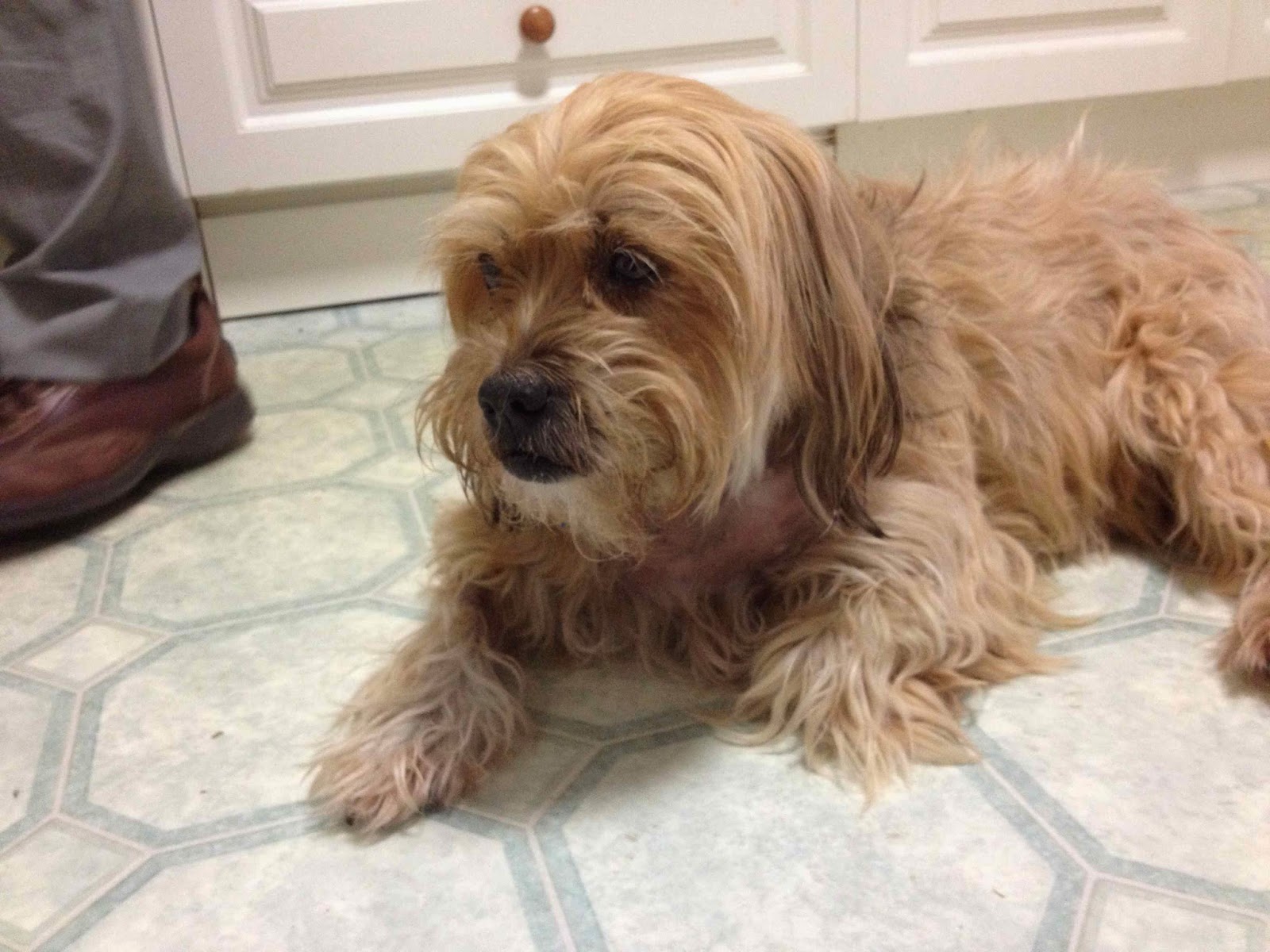 I cooked up a nice bowl of soft-boiled rice, carrot and chicken, and we gave her a small serving.
(Yes, you'll notice I burned the pot in all the stress of the moment, but her meal was not burnt.) 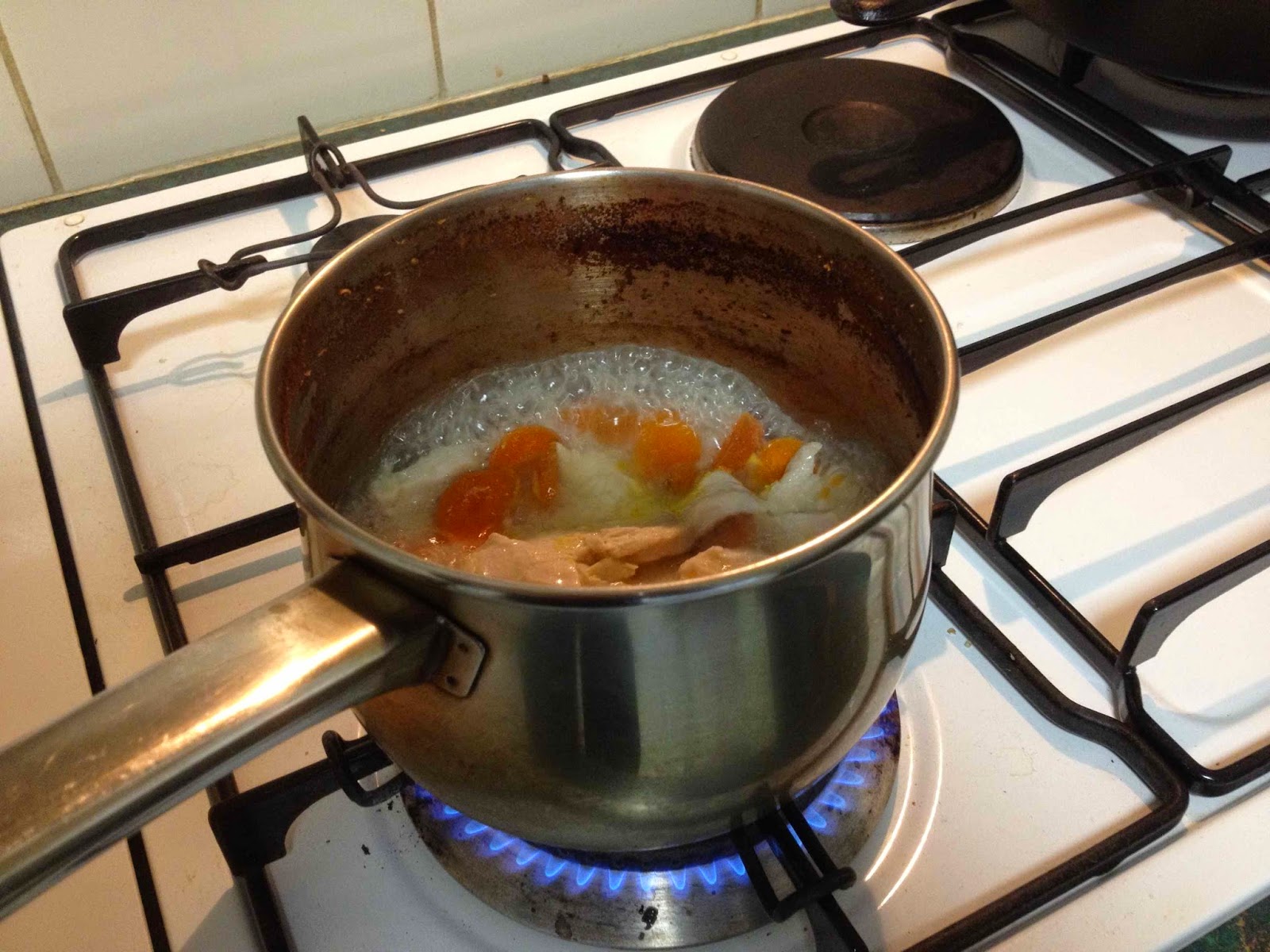 She tucked into the delicious meal and even had the energy to check around the outside of the bowl to make sure she hadn't spilled any. 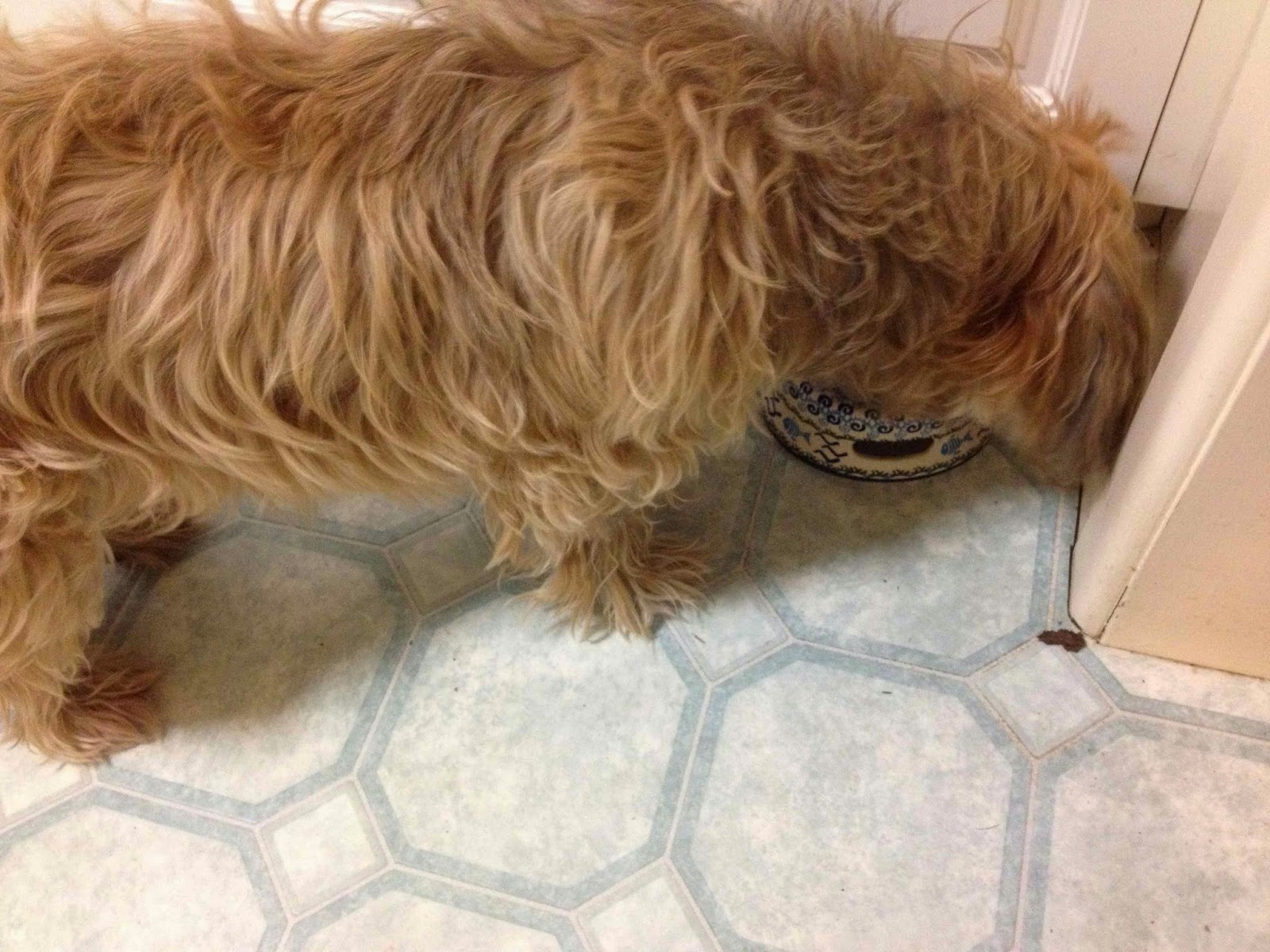 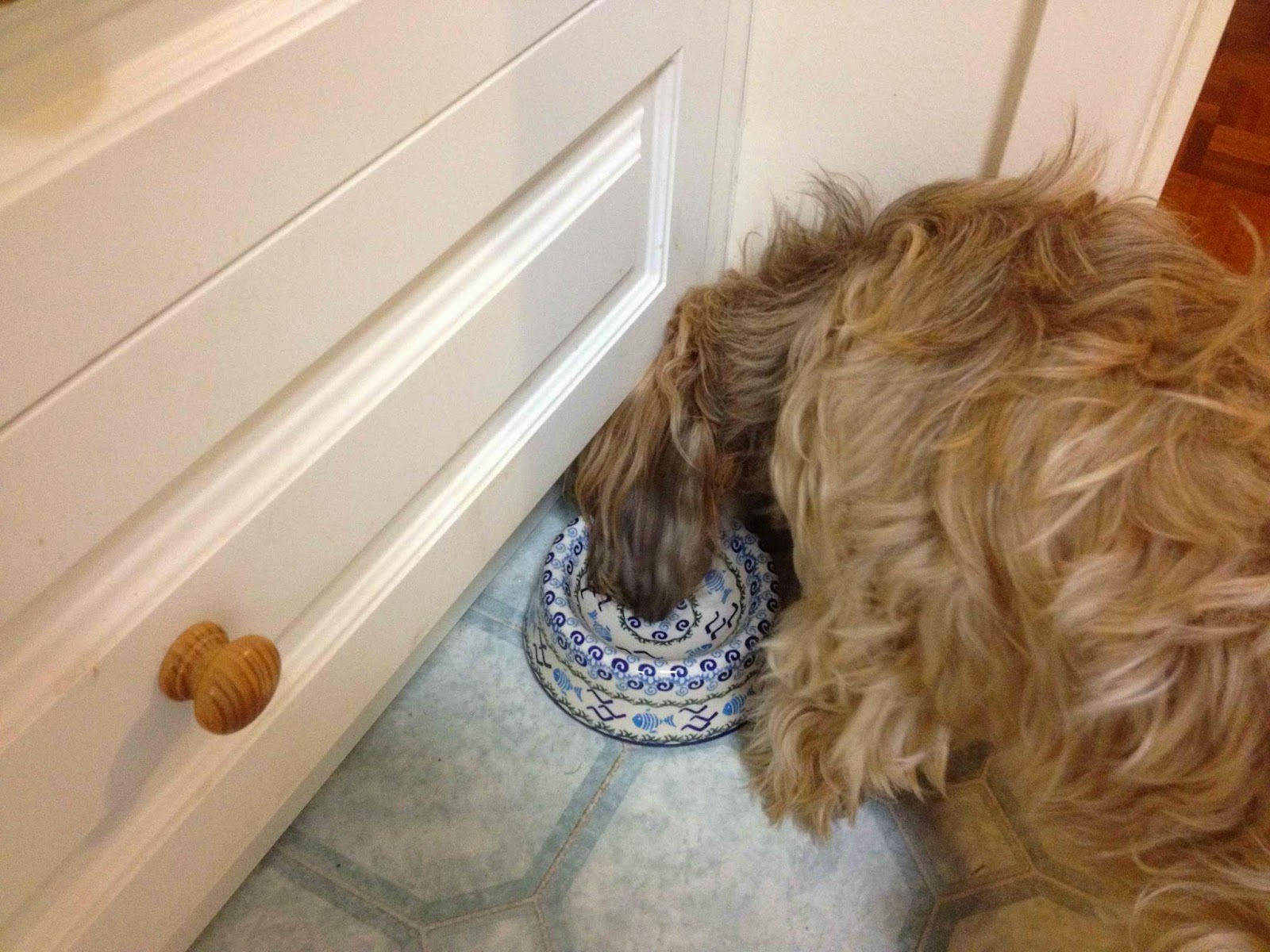 During the evening we fed her the rest of the meal, in two separate serves. She certainly hasn't lost her appetite so far.

Now it's a matter of keeping her comfortable and checking she doesn't scratch at the stitches. She didn't after the last operation on this lipoma, so here's hoping.

Oh, and the cough... well, she had so many (expensive!) preparatory checks today that we now know there is some bronchitis, so she'll continue on the doxycycline and we'll hope the bronchitis will clear up.

Posted by parlance at 22:12 4 comments: Links to this post

are probiotics good for dogs?

Penny's been prescribed doxycycline for her cough, so I wondered whether to give it with food. A site about human medications says having food in the stomach makes it less effective, but a dog-related site says always give it with food. Why does life have to be so complicated?

I'll play safe and give it with food.

Antibiotics destroy good bacteria with the bad, so when I take them myself, I use probiotics. I think I'll look around for a dog probiotic.

Yesterday Penny alarmed us by throwing up her breakfast, some hours after she ate it. On reflection, I think this was because I put some apple cider vinegar in her food, hoping to improve her possible kennel cough.

She had small meals of boiled chicken and rice last night and this morning and seems to be fine as far as her appetite and digestion are concerned. I won't be trying any more apple cider vinegar, but I'll continue with a quarter teaspoon of top-grade manuka honey for the next couple of days.

We've gone on no walks the last two days, and I think the rest is helping her. Because of renovations on the house, she had plenty to keep her occupied, checking out the tradesmen and saying hello as they arrived, so I don't think she was bored.

She has pretty much not coughed at all today, so tomorrow we'll take a short stroll around the streets, keeping away from other dogs. (On the other hand, Penny has only one speed on walks, and it's not a stroll, more like a race to find as much discarded food as possible, as quickly as possible, with quick rushes towards interesting smells on the bases of trees and shrubs and poles. But we'll try to keep it restful and healthful.) 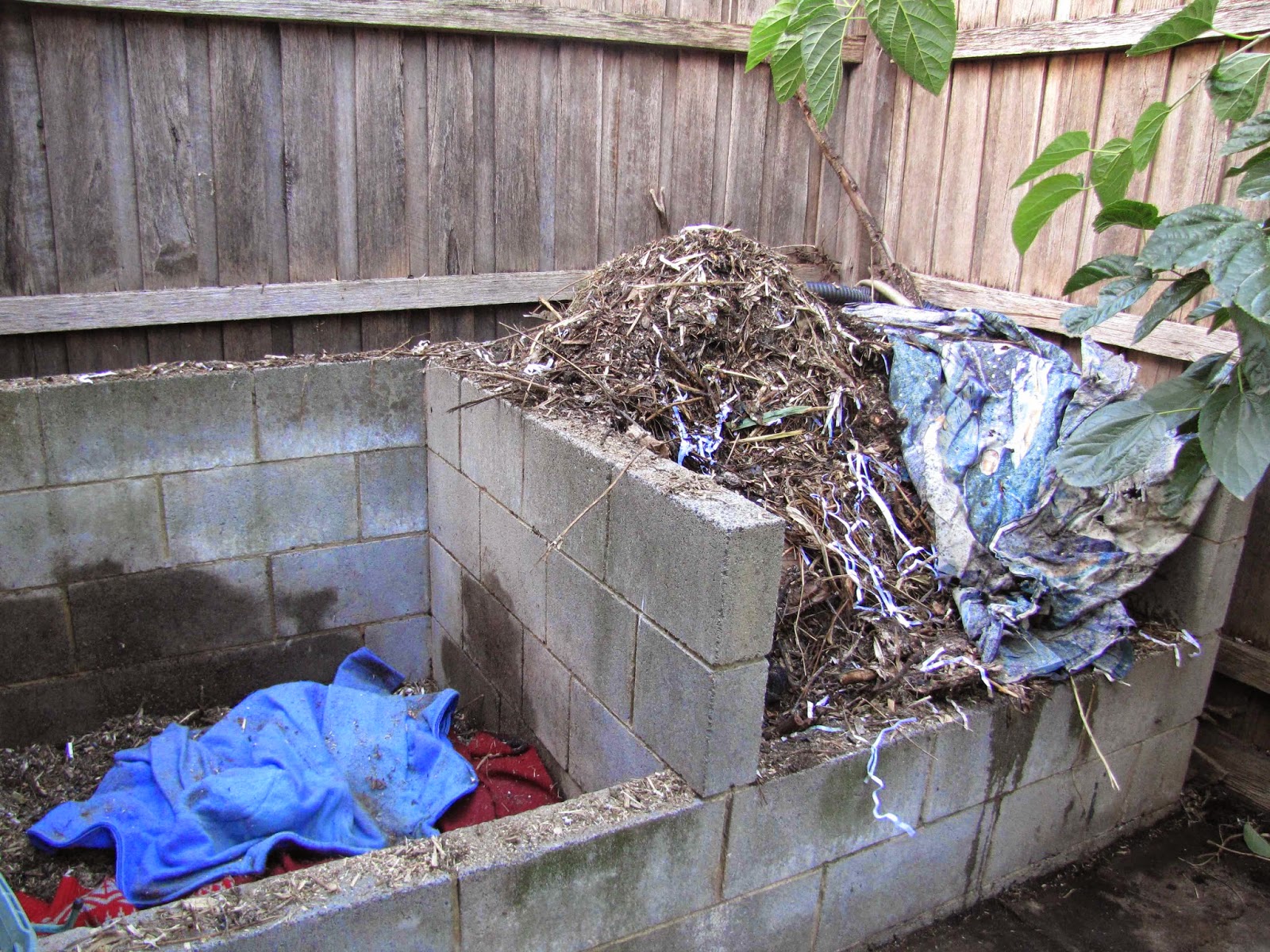 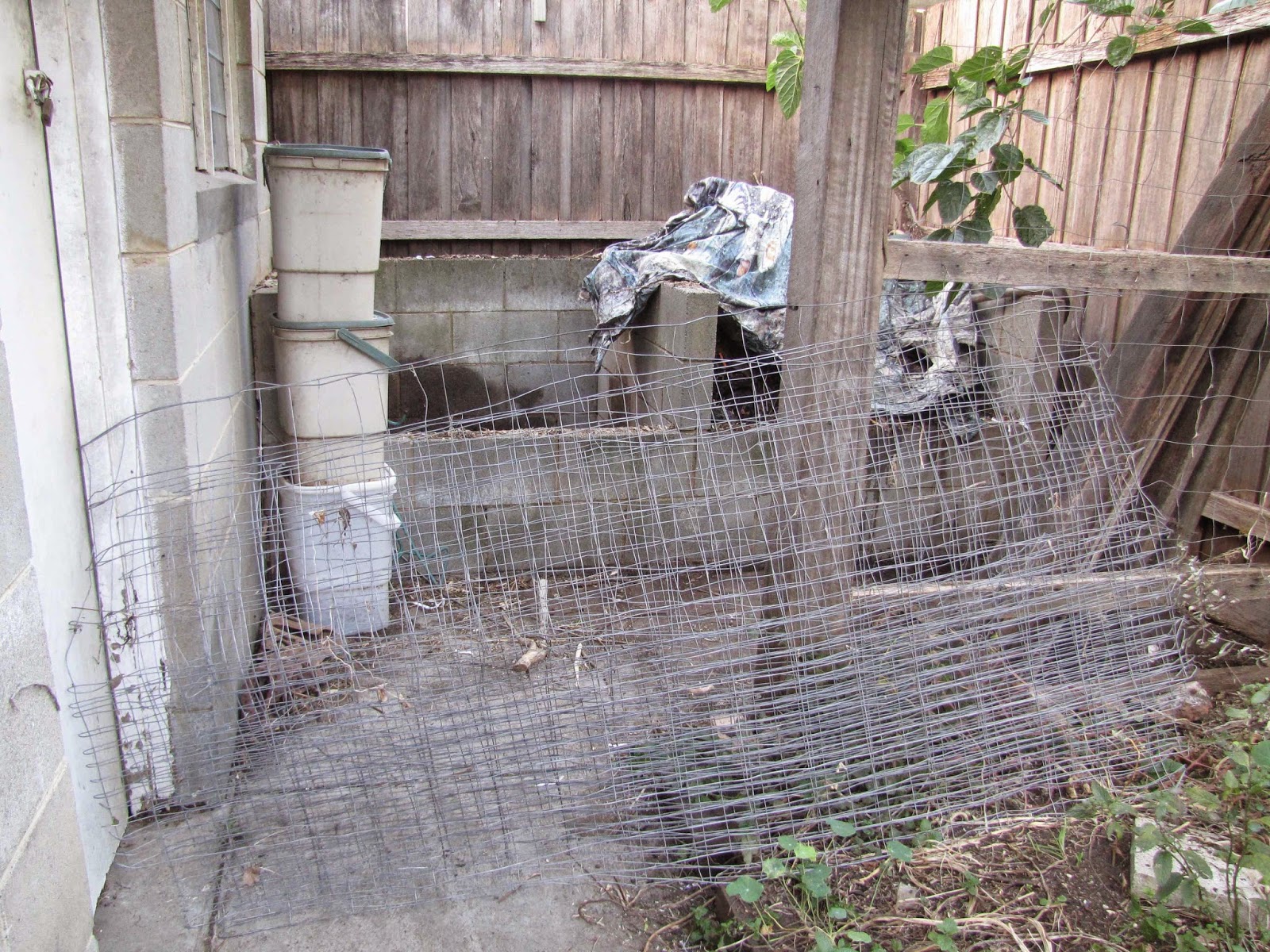 Posted by parlance at 21:14 3 comments: Links to this post

Penny has a cough. Again...

I had a look at a clip that shows the difference between a heart-related cough and kennel cough and I'm glad to say her cough seems more like the latter.

It's not a bad cough, so we're not going to the vet yet, but if it's worse tomorrow we'll get her checked. In the meantime, we're going for only short strolls, aiming to stay away from other dogs in case Penny's contagious, and also to let her rest and recover.

I'm trying a remedy suggested to us by a tradesman who was here today, and who is a dog lover. (BTW, we do wonder whether the cough is a result of months of home renovations and the consequent dust.)

After he suggested honey and vinegar, I looked at America's Blue Lacy Dog Blog, which has an article on natural remedies for kennel cough. We're giving Penny a little bit of - super expensive! - Manuka honey and putting a touch of apple cider vinegar in her water. The woman in the health food shop said the vinegar is better than most, because it has 'the mother' in the bottom of the bottle.

On reading more, I gather that there's some thought that we shouldn't give too much honey to dogs, so I guess we'll only try it for a couple of days, and assess her stools and her general health. After all, it's wonderful stuff for humans, so it won't go to waste.

There's a great deal of information about honey and about its benefits and dangers for dogs here.
Posted by parlance at 20:07 6 comments: Links to this post

solution to the free acrostic puzzle

I've realised I forgot to tell you the solution to the free acrostic I posted on January 30. Apologies for taking so long!

By the way, we're not sure whether to  call this a crostic, an anacrostic, or even an acrostic. But who cares? The puzzle's the thing, not the terminology. (I hope you agree.)

The novel was Curse of the Scarab, by H Y Hanna.

The short extract from this enjoyable book was:

The grey tabby disappeared into a towering bush, which seemed to have grown straight into the back wall of the house. Looking closer, Honey realised that it in fact concealed a huge gap where the crumbling wall had fallen away.

You'll notice that the first letters of the solutions, reading down, spell out the name of the author and the title of the novel.

I hope you had fun if you did it!
Posted by parlance at 14:21 No comments: Links to this post

How lovely this is! I just received this photo from The Cup and Mug Polish pottery shop. I have to go over and have a closer look. 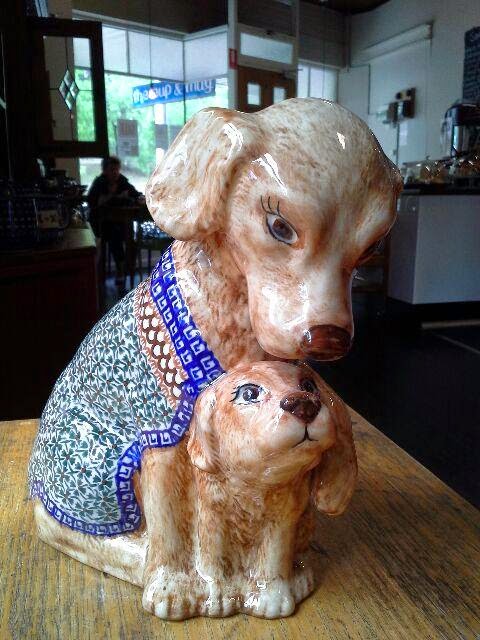 I wonder how big it is? And what it costs?
Posted by parlance at 15:49 2 comments: Links to this post

dogs are so patient

I loved this  clip of a - presumably domesticated - squirrel hiding a nut in the fur of a Bernese Mountain Dog.

Posted by parlance at 12:32 4 comments: Links to this post