A mystery has been solved.

A few weeks ago a night-time intruder came to our garden and dug up my pak choy seedlings. Or was it an intruder?

This week Penny has been inside and out with a foul-smelling 'thing' she's dug up from the garden. We can't figure out what it is, but when she chews on it, red meat is revealed. (No one's going close, to check it out.) The most probable explanation is that it's a piece of rabbit torso. Sometimes the taste of rabbit is too strong for her and it needs to be buried for a few days to ripen to a deliciousness we can't appreciate.

As I tippy-toed along behind to see where she would rebury it, all was revealed. She's the culprit who dug up the seedlings, burying her treasure.

I didn't see where she's buried it this time, but here's hoping this little fence will keep her away from it if it's in the same spot. I figure the meat will be a nice fertiliser for the rainbow chard and purple podded Dutch peas that grow nearby. 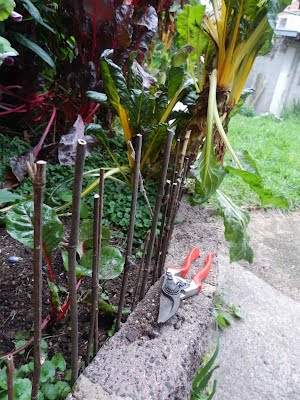 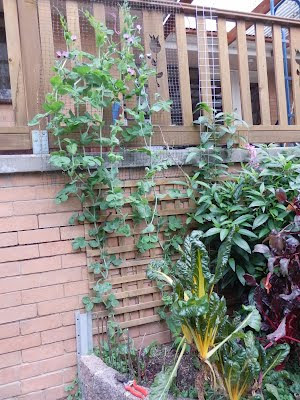 I  try to be philosophical about digging, because she's a dog, after all, but I'll be disappointed if she disturbs the roots of the gorgeous peas. 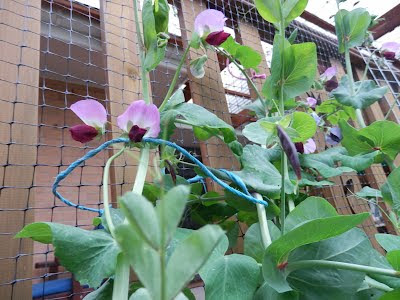 I was interested to see that there are only two known contagious cancers. One is in Tasmanian devils and the other, surprisingly to me, is in dogs and wolves.

The idea of cancer being contagious is mind-bendingly scary. Thank goodness it's a rare occurrence.

Here's an encouraging little clip about the steps being taken to try to prevent the extinction of the Tasmanian devil.

Science Daily says this type of cancer is less likely to be fatal in dogs than in Tasmanian devils. (Sadly, it's always fatal in devils.)
Posted by parlance at 22:22 No comments: Links to this post

a dog waits for the command to eat

Penny has always waited for a release command before starting her food, and she will also allow us to take the bowl away during her meal - probably because that only happens when we are adding to her meal, because we've forgotten something that was supposed to be in the bowl.

But she sure gives us those 'puppy eyes' to tell us to get on with the job if we make her wait too long.

I can't usually get such candid shots of her, because she doesn't like the big 'eye' of the camera pointing at her, and usually turns her head away. I got this clear shot by using a phone instead of a camera. 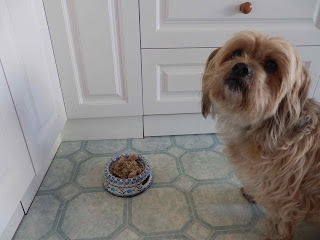 I've mentioned previously that I really like this new bowl, which I bought from The Cup & Mug, because it's solidly made, and easy to keep clean. 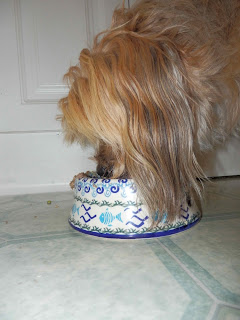 You can see how it didn't move shift on the floor when Penny changed position to clean up those pesky little bits of food that escaped down the side of the bowl. 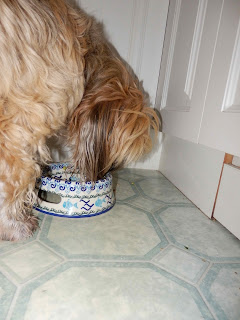 Posted by parlance at 05:00 2 comments: Links to this post

Penny stayed home last Sunday while I visited the Rupertswood mansion at Sunbury. I was having High Tea, in the huge, sumptous dining room.

When I saw the fantastic stained glass panels, made by Urie and Fergeson, in 1874-676, I naturally thought of Penny. 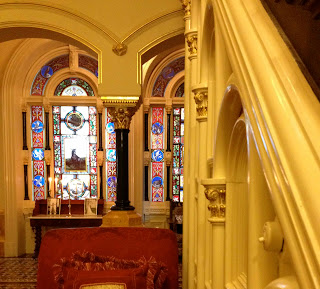 These close-ups might explain why I thought of her. Somebody involved in the design of this window sure loved dogs! 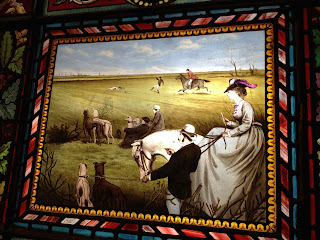 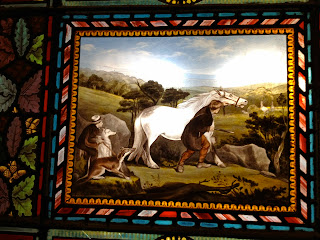 There were some lovely stained glass pictures of Australian animals, of course. 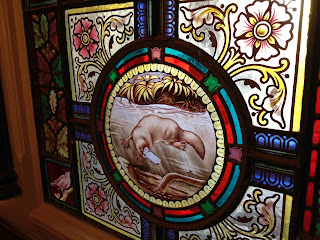 Here's another view of the windows, with a person in front to show the scale. 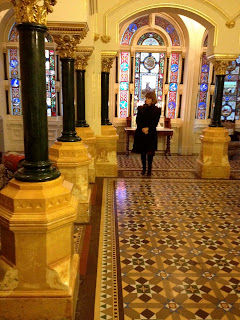 Posted by parlance at 22:10 6 comments: Links to this post

rescuing a drowning butterfly while walking the dog

While Penny was enjoying one of her walks on The Ninety Mile Beach in Gippsland last week, I spotted something bright at the edge of the water. It seemed to be a dead butterfly but, to my excitement, when I splashed into the waves to lift it gently, it moved.

I carried it up to the sand dunes beyond the reach of high tide and put it on a small flowering plant. 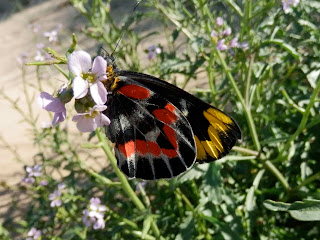 A little research on the Net has shown it to be an Imperial White.

How beautiful it is!
Posted by parlance at 10:00 10 comments: Links to this post

watching the big dogs in the surf

Penny might admire Cindy's chocolate lab, Byron, but she knows when she can't keep up with him. When we walked on The Ninety Mile Beach last week, she didn't try to follow him into the surf. She left this game to the big dogs. 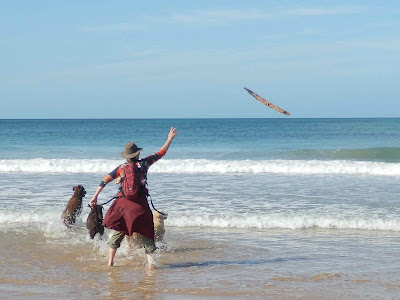 This was serious swimming, knowing how to time the waves to get out to the big sticks Cindy and others were tossing. (Can you see Byron's head in the water as he swims out to find the stick?) 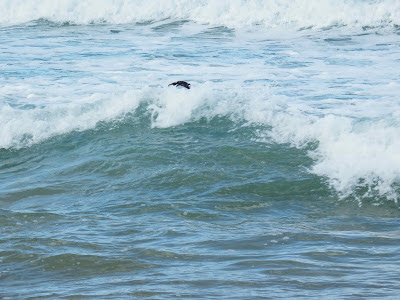 Penny was happy to watch. 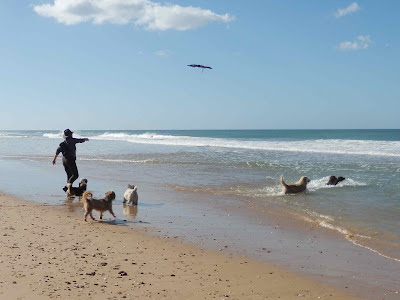 Posted by parlance at 04:00 4 comments: Links to this post

Penny's never been a great digger, so it was quite a surprise recently when she started digging a hole at the beach. On that occasion she was with Byron, Cindy's chocolate lab. Penny thinks Byron is the smartest, best leader in the world, so I think she may have decided to copy him.

Well, during one of our recent walks on The Ninety Mile Beach, she outdid herself, copying Byron's trick of digging a hole to bury a tennis ball (or a stick). 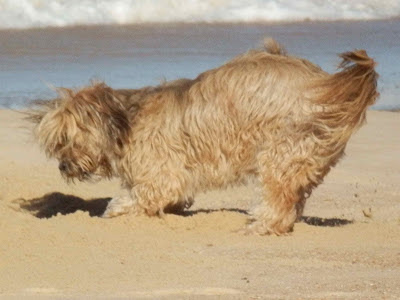 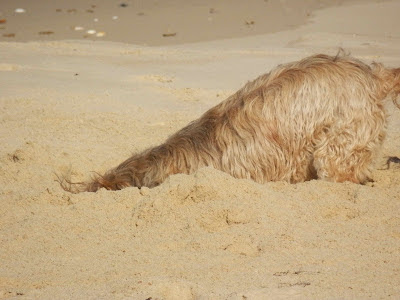 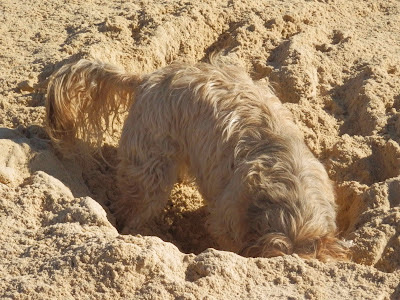 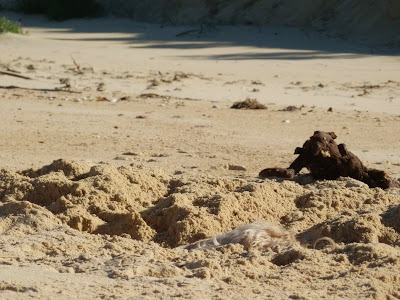 until she was satisfied. 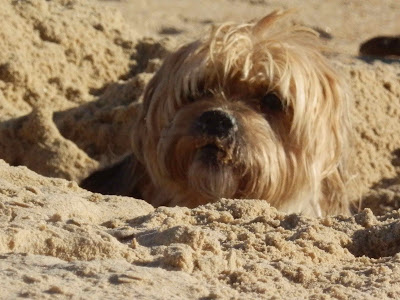 at the Ninety Mile beach

Penny spent a few days last week at Best Friend Retreat in Gippsland with some of her friends from Cindy's walking group. The holiday camp is delightful, as I've written about before. Early autumn mornings in the huge fenced yard were a wonderful contrast to busy city life... 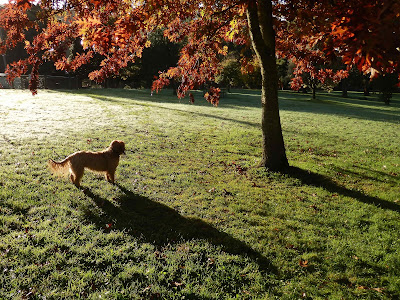 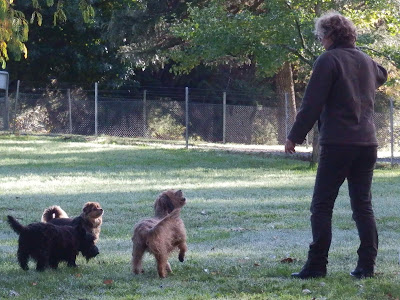 But the highlight of the stay - from my point of view, certainly -  was the hours-long walk on the Ninety Mile Beach each day. 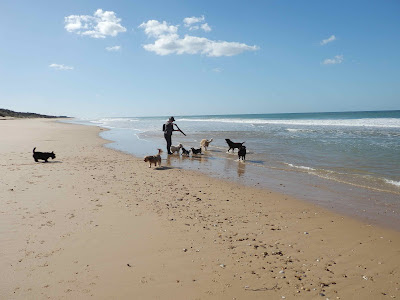 Posted by parlance at 21:45 8 comments: Links to this post

Penny tippy-toes along the O'Shannassy Aqueduct Trail at Warburton

Yesterday, as as a friend and I walked along the O'Shannassy Aqueduct Trail on the hills near Warburton, we discussed the fact that Penny is never happy to walk towards Dee Road. As usual, she began to lag behind, and raced to the front of the group once we turned back towards Yuonga Road. Whenever we walk on this trail, Penny is unhappy. But whenever we turn in the other direction, onto the newer section towards Cement Creek, her tail goes up and she prances along in front. I've frequently wondered whether there's something about the place that makes her feel uneasy, something about the actual ground underfoot. Therefore, I was quite interested to read this piece of history:

Since its completion in 1914, the aqueduct experienced several failures, two of which occurred between Dee Road, Millgrove and Yuonga Road, Warburton. The construction of an open steel flume section of channel and the picturesque Dee Slip Bridge remain today and serve as a strong reminder of the challenges the aqueduct faced.

Looking around, I came across a Shire of Yarra Ranges document about landslips in the area. Most interesting. I guess Penny may be feeling something we humans cannot. But I don't think the footfalls of two humans and one 15 kilo dog are going to cause any problems. Seeing it's one of the most beautiful spots I've seen anywhere in the world, Penny will just have to tippy-toe along there with us. 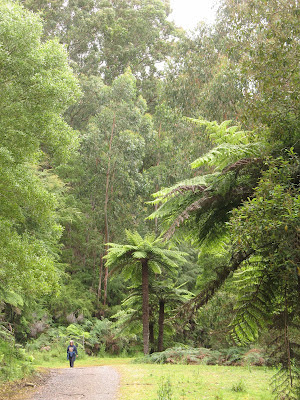 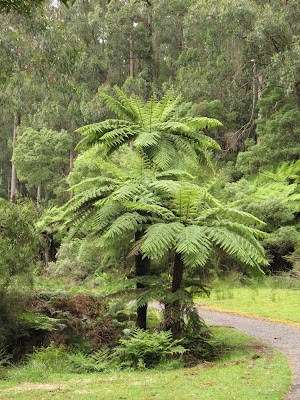 Posted by parlance at 00:02 No comments: Links to this post

Given that I don't even know what a pump is, I looked for a definition and found this one:

Pumps are one of the most popular styles of women's shoes, and they're also one of the most difficult to define. In their most basic form, pumps have closed backs, and low-cut fronts that hit closer to the toes than they do the top of the foot.

I leave it to you to decide whether Penny seems to be wearing pumps: 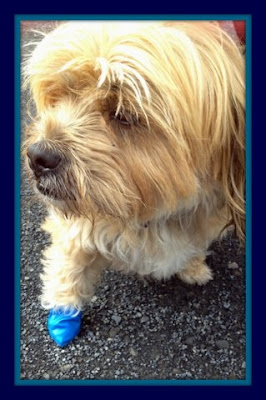 What actually happened was that as Penny walked, the Pawz shoe, which looks like nothing so much as a deflated balloon, folded itself around her foot. It seems that as the rubber ages, it gets kind of sticky, like old balloons do. Whatever the reason, Penny finds the shoe comfortable and it protects her foot.
Posted by parlance at 23:04 6 comments: Links to this post