Penny was watching from inside the front door as I weeded the front garden this afternoon; she doesn't get out the front because we don't have a fence along the street. I was pulling out a plant that looked like choko and I wanted to make sure I wasn't discarding a useful plant, so I took a well-earned break and searched on the internet 'plant with milky sap looks like choko'.

I'm glad I did, because this plant definitely has to go. It is poisonous to animals and harmful to people. A Weed Fact Sheet from the New South Wales Government says,

It is suspected to be poisonous to cattle, poultry and dogs. The sap can cause skin irritation and severe allergic reactions in susceptible people.

I guess I'm not a susceptible person, because I've pulled out heaps of these plants, in our own garden and on weeding sessions in Darebin Parklands. Confession time - I'm really, really silly, because I sometimes garden without gloves.

After I read the scary stuff I washed the sticky gooey stuff off my arms and hands and donned gloves. The Fact Sheet says to dispose of the seed pods by bagging them and 'disposing of them safely', so I thought I shouldn't put the plant in the green waste bin. I put the whole thing in the rubbish bin.

Now, it may be a weed, but what's a weed after all, except a plant that we don't want to see growing where it does? I know Peter, the Ranger in Darebin Parklands, hates this particular weed and the Fact Sheet certainly shows what a pest it would be in our lovely bushland oasis.

It is also becoming more widespread in southern Victoria, particularly in and near Melbourne...
they reduce indigenous biodiversity. They do this by degrading the homes or habitat of indigenous plants and animals, thus
contributing to the extinction crisis both locally and globally.

BUT... it's so beautiful if you open the fruit. 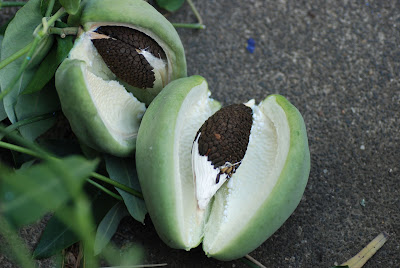 I know I'm not the only one who thinks so, because I found a flickr member who took a picture of the beautiful seeds, one that captures the iridescence of the hairy tops, as I couldn't do.
Posted by parlance at 20:18

Mom says that plant doesn't look familiar to her!
Gram says that the butterfly picture was given to gramp by a man from Japan!

Love ya lots,
Maggie and Mitch

I'm sorry to hear Penny was unwell last week. I hope she is all better now. They're a worry these dogs of ours.
As for that plant, I haven't seen it around these parts. It may be too cold for it.

Hi, Noah. You were certainly looking very handsome when I visited your blog today. The plant is moth plant, by the way. I forgot to write its name in the post.

Thanks for the info about the wonderful butterfly picture, Maggie and Mitch.