I came home from last week's flyball practice downhearted, because I was starting to wonder whether it suits Penny's temperament.

We had won a ribbon, though.

Here is Penny with the ribbon she won at the RACV Australia Day flyball competition. 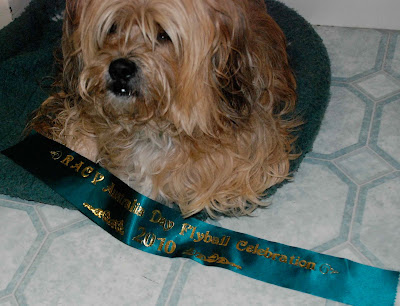 I thought maybe, just maybe, she looks a little embarrassed in this shot. We did come third, but it was the lowest division and there were only three teams in that division. But, hey! a ribbon is a ribbon and you have to celebrate.

But today has restored my enthusiasm, because Penny ran a clean run every time except once, and given that she ran about 21 times, that's pretty good. We actually won one heat and were super happy about that, and then later...da dum!... we won an event.

Which meant that this time, although we once again came third, we weren't last, because there were FOUR teams in our section! 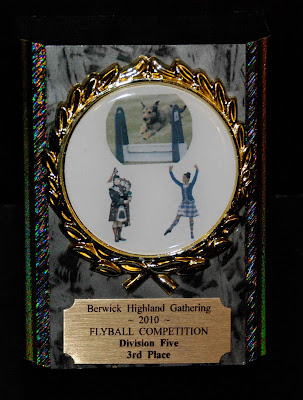 Towards the end Penny was going rather slowly, probably because she was tired.

Or, was she just tired of running backwards and forwards? Magically she came to life after the competition was over and raced around the empty oval chasing the great little squeaky toy she won as a prize. And when she ran into the creek to retrieve it she seemed energetic again.

Very mysterious.
Posted by parlance at 21:19

Oh, Penny-poo. You got tired, furiend? I love getting myself exhausted and then crashing for long naps, and I don't even get awards. Great job my furiend. Congratulations.
Twink!

Twink, it's not just Penny who's tired at the end of a flyball event.

Been struggling to catch up with visiting blogs so am just catching up on your posts now!

Yay for Penny! I think a ribbon is a great achievement - whatever the place!

But I do know what you mean about feeling downhearted...I often feel like that about Honey! I think it's harder when you've got a dog that doesn't live just to "Work" and whose motivation in life often involves doing their own thing (or not doing anything at all, as in Honey's case) and who also gets easily bored if asked to repeat the same thing too many times (whereas working breeds don't! I think their slighlty OCD natures helps in this respect!). But I think if we gave up at the first disappointment or hurdle, we wouldn't be here and our dogs wouldn't enjoy as fulfilled a life as they do! Besides, isn't the feeling of achievement wonderful when you DO manage to engage them and they do perform well? :-)

Hsin-Yi, I agree completely. There are two strands to it for me, and from reading your blog I think it's the same for you - one, I actually want to enjoy myself, but the second thing is that I won't do an activity if I don't think it's good for Penny. We can get through the occasional reluctance to engage with the activity, but if she really doesn't enjoy it I don't see the point in continuing. She seems to have enjoyed flyball practice the other night, though, so I'm quite hopeful once again.