It was very exciting that Penny was involved in a photoshoot for a local newspaper last weekend. Here's a clipping from the paper, the HeraldSun, with Penny's picture at the bottom of the page. I wish they had put the photo online, so I could link to it, but the photo was only in the hardcopy edition. Isn't the photo at the top spectacular? It's one of her teammates in our flyball club. 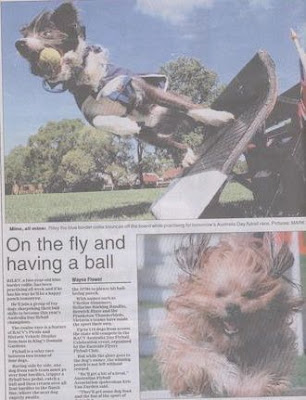 The photo was part of an article describing the Australia Day celebrations in Melbourne, part of which was a flyball race.

Penny took part today and I think she had fun. But after a couple of races she decided it would be more enjoyable to wander around and say hello to some of the thousands of spectators.

Here's a photo of two teams lined up, to give an idea of the temptation that would face a friendly dog who loves meeting new people. Thousands to choose from!

There's an important line marked down the centre of the arena and the rule is - don't cross that line or you will get a yellow card and your team will lose the heat. Penny, running in the right-hand lane, crossed, presumably because the most interesting people were down there in the left hand corner. 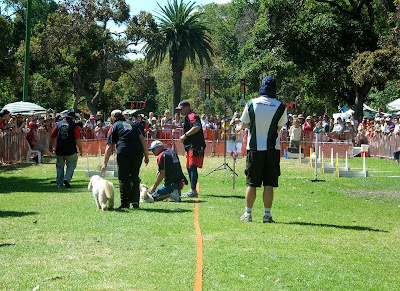 And she crossed again! TWO yellow cards. And everyone who knew more that I did about the sport was telling me the horrible consequences of a third cross. Not to mention letting the team down!

So it was back to rest in her crate, under the tents that were set up in the shade of the trees. 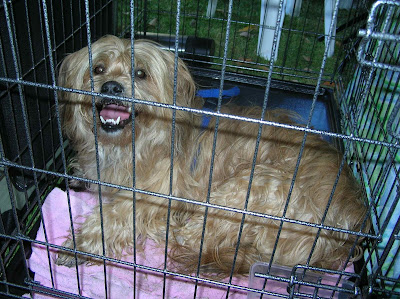 We were in the 'sin bin' for three heats, and then the pressure was on me to encourage her to go over the four jumps, collect the ball - and come back. Well, she went for a little stroll at the end where the ball was, but thankfully didn't cross the important middle line and we were allowed to try again.

After that all her heats were okay, but slow.

Dear Penny, now that you're famous, will you still remember your ol' furiends? Cool photo. Can't you ask our human to scan it better? :) If I were you, I'd turn it into a mural, but I'm not vain
Twink!

What great photos in the papers!

I would so love to try flyball with Honey but not sure I could find a suitable place to try it, not to mention that she'd probably be too big for the course and wouldn't be able to work out why she needs to jump over the hurdles on the way back (why do anything the hard way when you can do it the lazy way - is the Great Dane motto!)...anyway, in this heat at the moment, I wouldn't even want to watch it!! :-)

Penny you champ..now featuring in the newspaper! She is one cool dog..congrats

Honey, it can be very hot here at the moment, too. I seem to have got into flyball just when the weather is terrible. It's a long day, also. Leave home at five and Penny spends a lot of the day in her crate. I think Honey wouldn't like that.