Lately people have been asking me whether Penny can see, when her hair falls over her face. In general, I like her to have a fringe in summer, to give her some protection from the harsh effects of the sun on her eyes. Here she is looking pretty hot on our weekly off-lead walk with Cindy at Coldstream last Saturday. (I hope it's cooler tomorrow!) 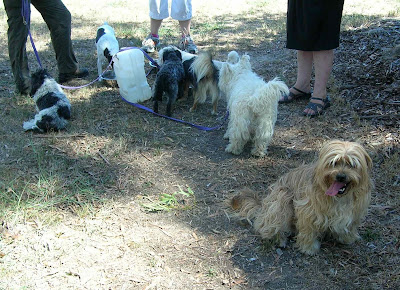 Cindy suggested to me that I could thin Penny's coat by using thinning shears, so I've been trying it out. I've come across lots of sites showing how to style either human hair or canine hair using these tools.

So far I've just experimented with desensitising her to scissors, as she's never been trimmed at home with scissors before. I've trimmed around her rear end and tried to get rid of some of the bulk on her legs.

It's a 'work in progress', but I'm keen to learn more because Penny doesn't really like going to the groomers and I can't just let her hair grow indefinitely. (She seems to have the maltese every-growing coat, though her heritage is a bit suspect. She simply doesn't look like what she's supposed to be - a maltese X shih tzu.)

I've got Dog Grooming for Dummies on reserve at the local library, so I'm hoping to turn into an expert when I read it. Hmm...not very likely. But one book that I've already got from the library has good information. It's the incredibly heavy Dog Bible. My hands got tired holding it up!

It's a fantastic book, though, with information about all sorts of things - dog genetics and history, dogs in religion and folklore or popular culture, dogs and the law, health, daily care, breeds, diet, training, fun activities, and, of course, grooming - to name just a few of the topics covered.

I think I'll have to buy it, because I want to have it on hand all the time.
Posted by parlance at 22:59

Two Pitties in the City said...

My hairdresser thins my hair. I can tell you it does make a world of difference.

Mom uses thinning shears on us at times and they work very well!
We think you're adorable with your longer fur, Penny!

Love ya lots
Maggie and Mitch

I just need to locate a hair curler that will work in Paris and I got a grooming lesson. Oh, well. If my opinion counts, I love your fringe, Penny.
Twink!

Schwang, I'm assuming you mean a hairdresser for human hair, lol, seeing the two dogs have such lovely short coats.
I loved th video clip about the pears, by the way.

Maggie and Mitch, I guess I'll just have to practise. My idea in using thinning shears is to let Penny keep her lovely long coat but to try to let her cool down a bit.

Twink, you are such a fashionista that Penny says thanks for the compliment.

You'll have to ask Melissa next week at class!! She is a dog groomer and I'm sure she'd be happy to give you some tips. She teases us about the way we clip Cody, but we dont care, Cody is just our little mutt!

Doozer, when I saw Cody I thought she looked beautiful, but I guess I'm no judge of dog grooming, lol. Since this post Penny has had one professional grooming session, so she can see more clearly now.