Penny's asleep on her special chair as I write this, and for the first time in living memory she is too tired to have any dinner.

She's exhausted after a satisfying two days with Richard Curtis, at a seminar on canine freestyle and heelwork to music. Richard is the first person to train two different dogs to win the Crufts freestyle final, with Disco in 2006 and Pogo in 2010. I'm so glad he accepted an invitation to come to Australia.

To me the weekend was wonderful because Richard is not only a successful trainer but also a gifted teacher. At the seminar there were thirty handlers with dogs and a group of people observing without their dogs present, and I believe everyone had a great time. The sessions were highly organised and instructions clear and everyone had a chance to learn at her own level - a credit to the ability of the teacher.

I was nervous before I went on Saturday morning, because I know I am inhibited at the best of times, but more so in front of others. However, by mid-morning on that day I was feeling relaxed and successful. And that's amazing! Penny doesn't like being with me when I get tense, so my enjoyment of the seminar helped her to focus really well. 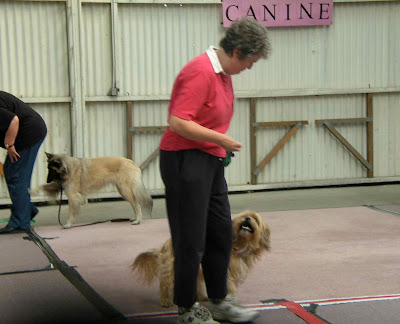 We worked in two groups of fifteen dogs and handlers, so there was an opportunity to listen to instructions and practise them straight away with the dog, followed by a time to observe the second group doing similar activities and take notes.

I think this is a great teaching method.

At one stage when my group was practising a movement and I couldn't work out my left from my right Richard was very patient. Eventually even the the people sitting along the side began trying to help me, calling, "Turn left! Left!" By this stage I'd virtually forgotten there even was a word called "left" in the English language. And then Richard put me out of my misery by standing in front of me and saying calmly, "Turn towards me."

The other thing I liked was working without our dogs, practising moves and short routines.

I've taken pages of notes, but without consulting them, the main points that I'll be looking at in my own training are:

Practise in many different places.

Save the high-value treats for the times that matter.

Practise frequently with a cane or other object in my hands.

I need Penny to be good at responding to verbal cues (especially important if she is working behind me).

Penny shouldn't be so focused on my hand, because there are many times when my hand will not be available for a signal.

The last three points became clear when Richard asked us to do a round of the room, incorporating a couple of simple moves - whilst keeping our arms folded! Penny walked beside me looking amazed that I wasn't giving any signals. 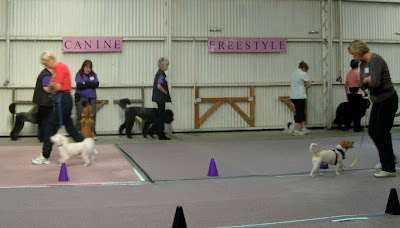 I feel so enthusiastic after the seminar that I could make this a long, long post, but I'll save more for another day.
Posted by parlance at 21:54

I've watched the video of Richard and Disco so many times. It makes me smile every time. What fun they seem to be having together.

Sue, his love for his dogs came through so strongly! I was really grateful that he would come all the way to Australia. I only hope when he's finished in Brisbane (where he's going next, I think) that he can fly back to Britain okay. (No flights at the moment, because of the Icelandic volcano)

I've been wanting to read & comment on these posts for ages but have been having broadband problems - and then we were away at our own Richard Curtis camp!!

first of all, yes, he got away OK - and is safely back in England now. And yes, we had a brilliant time too - and are also exhausted from all the mental stimulation. It WAS wonderfully organised & structured and he's a great teacher. I only got to work Honey on one of the days as there were too many dogs but it was still very useful and interesting spectating! I'll be posting about our experience soon!

I've been wondering whether you went, Hsin-Yi. I thought you were intending to do so.

I'm looking forward to your posts.