Penny and the Australian Grand Prix

That's to say, she was close to it. We headed off to visit a friend who lives near the St Kilda beachfront, and discovered there's an off-lead dog beach right in front of her apartment. The plan was for Penny and one human to play on the beach while the other human visited her friend.

Wasn't going to happen! Penny was upset that one of the pack had gone missing and spent the first forty minutes tracking up and down alongside the busy roadway. I took her to the beach, but was afraid to let her off-lead as she was so obsessed with finding the lost pack member.

All this was accompanied by the roar of racing cars and the shriek of overflying jets as The Roulettes put on a magnificent display. Penny took no notice. (She has experienced a low fly-over in her flyball days, when our event had to stop because the Roulettes were diving just over the Botanical Gardens where we were racing.)

And the weather was cold! Hooray! After the hottest start to autumn Melbourne has experienced (since detailed records have been kept), I'm loving the cold, wet weather. Not the best day for the beach, but the kite boarders seemed to be having a ball. 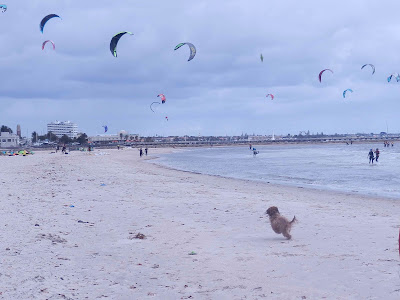 And, best of all, we let Penny run around, jump into the waves, chase balls - once the pack was reunited, she lightened up enough to have fun - and she isn't limping the next day!

We'll go and have the third of her weekly cartrophen injection tomorrow.As Honey's human commented on my post a few days ago, this medication is as much about prevention as cure, so we're not expecting sudden results.
Posted by parlance at 11:59

We are just loving that picture! What a fun day for you, Penny!

The kite picture is pawsome.

Thanks, Lassie and Benjie, and Mitch and Molly! It was a pleasure to see Penny running once again.