we explore new places when we have a dog

Feeling excited that Penny's paws are fine now, I decided she could cope with a longer walk today. We stayed mainly on grass, at one of our favorite places, Willsmere Park in Kew.

However, it seemed a good idea to test Penny out on a hard surface, so we went in a new direction, out of the park and along the shared path towards Fairfield. We had to stay on lead. I tried to get Penny to mostly walk on the edge, on the soft soil there, but she insisted on walking on the concrete surface itself.

When she was on the actual path, we had to keep our ears cocked for the sound of a speeding cyclist coming from behind. As the sign suggested, some warned us with a ringing of their bells, like this courteous guy who passed us so quickly I could hardly get a picture of him.

But this rude fellow raced up behind us with no warning.


It was great to get back onto the nice soft walking path into Willsmere... 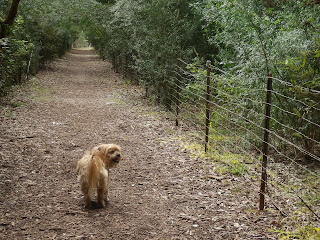 and back into the park itself. 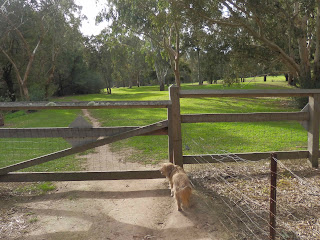 We get out and about so much more with dogs!

Stop on by for a visit
Kari
http://dogisgodinreverse.com/

Yeah, some cyclists want you to keep your dog under control but give no indication that they are there! And they go FAST, so I suppose ringing the bell is useless for them, they are upon you before you have time to react.

Kari, you are so right. Since having Penny come to live with me, I have explored many places around my own neighborhood and further afield.

Mary, I still think they could ring their bell loudly and further back. But I see what you mean about their thinking it's not worth it. After all, we were out of his way and off to one side.

Our overseas visitors left this morning so we're FINALLY starting to catch up!!! :-) Looks like you've been keeping busy - I'm glad your sore paws seem to be getting better and you're able to get out & explore new places again!

HI, Honey
Nice to see you around once more. We've been keeping up with your blog and know how busy Hsin-Yi has been.