Today Penny and I set out for a new walking place, the Plenty River Trail. It's a beautiful area and I had mentally marked it for exploration. Because I had an appointment nearby, and it's a cool day, I thought Penny could walk for an hour and rest afterwards in the car while I went to my appointment. 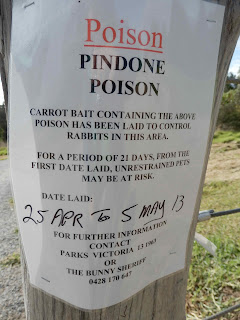 I thought we'd be fine, because the poison was in carrots and I couldn't see any carrots around. And Penny was on a wide path and on lead. But as we continued, I became nervous about whether she might scoff the little heaps of rabbit poo along the edge of the path. She loves herbivore poo - possum, kangaroo, and most delicious of all, wombat poo.

So we turned back and looked for a different place. 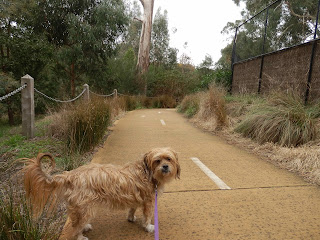 We saw some nice edible indigenous plants, too. (Not that Penny fancies them. We have them in our own yard and she has never nibbled them.) We saw kangaroo apples... 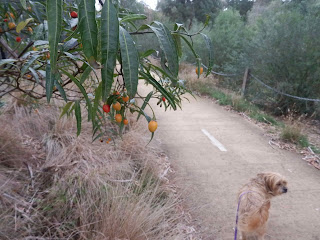 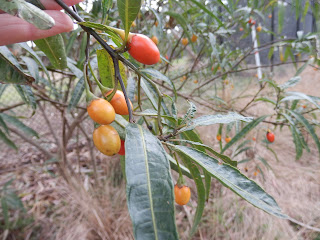 and what I think is berry saltbush. 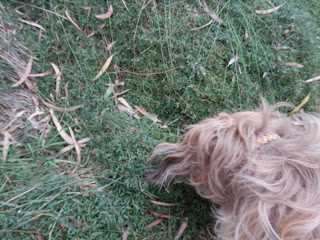 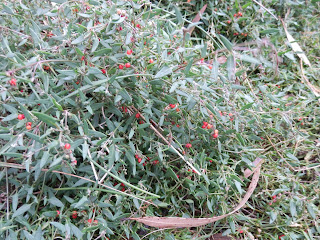 We also looked at some kangaroo grass. 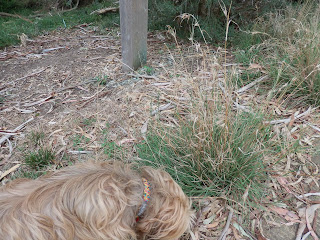 All of which was interesting for me, but not much fun for Penny, so after my appointment and her wait in the car, we headed off to Warringal Parklands, which was much more enjoyable for her. But more about that next time...

Those kangaroo apples look delicious, Penny, and it looks like you can just reach up and grab one off the tree!

Love ya lots♥
Mitch and Molly

Mitch and Molly, to be quite honest, I think the kangaroo apples taste horrible. But they are edible. Maybe I just don't know how to prepare this indigenous food properly

Are they called kangaroo apples because kangaroos eat them?

Mary, you sent me off on an exploration of the internet. It appears they are called that because the leaves look like the footprint of a kangaroo. But this photo I've taken might be of a related plant, also called kangaroo apple, which has leaves that don't look like kangaroo footprints. Strange...

I think I'll blog about it on my other blog, wordsallaround. blogspot.com.au