Penny doesn't care what kind of little plants she's running across, as long as her feet don't get caught in the cracks in the dry ground. (Yes, that blur in the distance is her.) 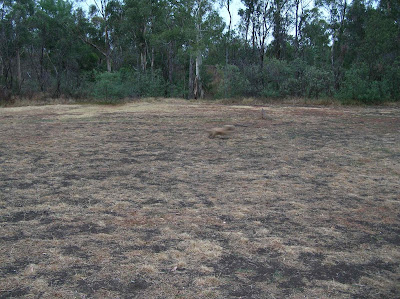 I have to admit I'm posting today only so I can show off the new word I just learned.

I was reading that the Sydney Botanic Gardens Trust has released a report saying we may have to live in a world of weeds in the future, because weeds will be the most successful at adapting to changing environments, in the face of climate change. The article said:

The study found many species would have difficulty adapting as their natural habitats shrank due to climate change, and biodiversity would be lost.
'We were struck by the conservatism of plants, basically how rarely they were able to adapt and flourish outside of their ancestral environments,' Dr Weston said in a statement.
'Conservationists can't expect plants to dramatically change their ecological preferences and evolve to fit new habitats as the boundaries of these biomes change in response to climate change."

I was reading along quite happily until I came to that word biomes. And that stopped me. Wow! I love new words, as I sometimes post about on my other blog, Words All Around.

As far as I can work out, it means pretty much the same as environments.
Posted by parlance at 22:54

Labels: biomes, dogs, Words All Around

It looks like Penny is well camouflaged. Maybe this is her best sort of environment.

Yep. It looks like her ancestors must have evolved to hide in dry grasslands. Which, come to think of it, is a bit strange, seeing we thought maybe she came from a long line of princesses who lounged around in Tibetan monasteries.

Amber-Mae I think you would blend in there also.