Yesterday's visit to the Parklands began and ended with birds.

First, as we walked along the creek, in the off-lead area, Penny had to stay on lead because there was a duck with ducklings. (Click on the photo to enlarge it and see the gorgeous little creatures.)

Penny didn't even realise they were there but the mother duck was concerned, so she gathered up her large brood and headed for the opposite bank. 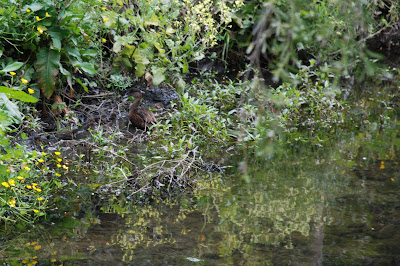 And soon the babies were completely hidden. 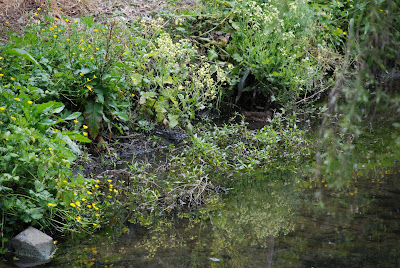 After our exercise we made our way up the path and came across a baby crow (actually a species of raven, I think, but I call them crows) sitting quietly in the main entrance. Dogs are supposed to be on lead at that point, but I wasn't confident that everyone would obey the rule, so I called in at the house next door and asked the owner if I could put the baby over the fence into his yard. 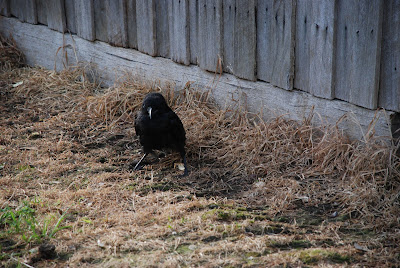 He said it had in fact been in his front and back yards during the day, so we presumed it could fly at least a little.

The baby was quite unconcerned about being carried around by a human (wrapped in my jacket).

In the end I decided to put it back in the park, because I'm fairly sure there's a crows' nest in one of the tall trees there. It shook out its wings as I placed it in the tree and observed me calmly as I hurried back to collect Penny from the fence where she was waiting on lead. 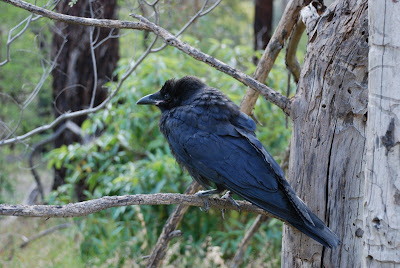 I hope I did the right thing. I've checked with a bird-loving friend and she says it's a myth that human handling of a baby bird makes the parents reject it. And I remember one year when a whole nest full of baby crows took turns to tumble onto the ground from their nest in my school, and were subsequently cared for on the ground by the adult birds, over a period of weeks, whilst hundreds of young children played around them.

So I think the parents will come back and care for this fledgling.

Another reason I decided to move it was that two Indian Mynahs were walking around it and I thought maybe they were going to attack it.
Posted by parlance at 20:59

Oh, I think I would have wanted to bring that baby crow home for a pet!! :-) I'm really terrible like that! :-)

Oh, Hsin-Yi, I so-o-o wanted to bring it home, because I think crows (ravens?) are wonderfully smart and interesting birds, and it was so trusting and warm in my hands, with its bright eyes watching me.

But a long-time colleague who was in our main bird-interest organisation for years has always indoctrinated me that you shouldn't interfere with nature where birds are concerned.

It was so hard to leave it there!

Hi Parlance,
Everyone brought up in Victoria calls them crows but apparently they really are ravens.
I have a friend who had a baby crow in her yard last year and the parents cared for it for weeks, on the ground.
I visited her yesterday and there were 2 crows feeding another (it was so big that the only way we could tell it was the baby was the open beak and the feeding). My friend is wondering if it is the same couple from last year.

Mary, could it perhaps have been the baby, grown up and a parent itself?